I was commissioned to make a "Jack Skellington" and "Sally" doll from Tim Burton's "Nightmare Before Christmas" movie. These dolls needed to be large -- about 3 feet tall. 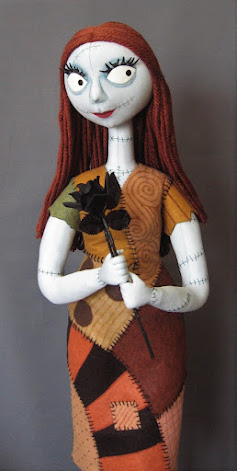 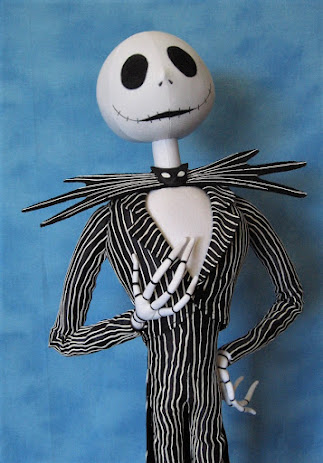 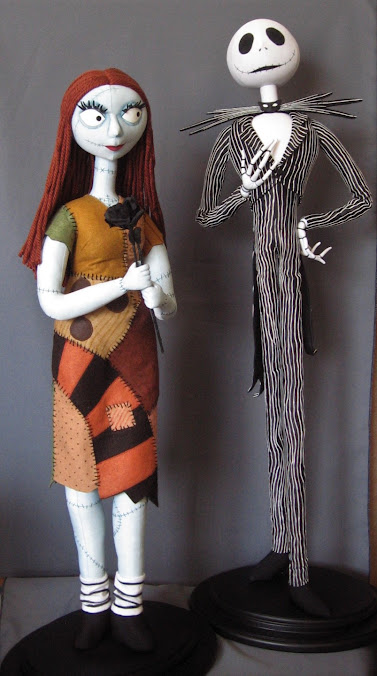 Because these characters were already designed, I needed to be as accurate as possible when making the dolls. I decided to make a quick sculpt of each character to take a pattern from in order to make the cloth bodies. To make the sculpt look just like the figures, I used images of the figures as a model. 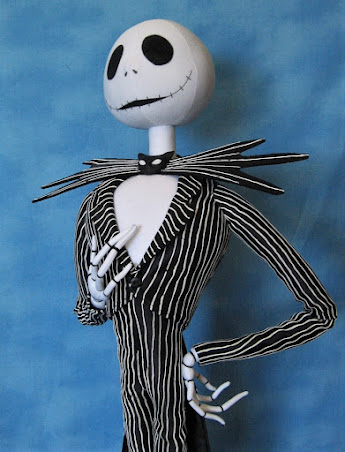 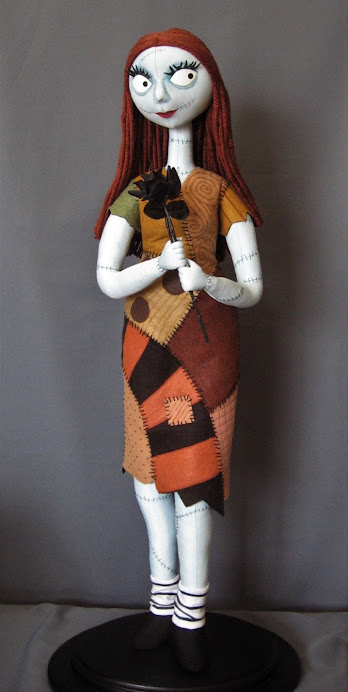 First, I found photos of the characters. I needed a photo of each, from head to toe, looking as straight forward as possible. I took these photos to a copy place and blew them up to the size I wanted. Now I had a photo of the characters in the exact size. I traced each body to make a simple line drawing. I drew a profile of the figures by hand next to the new photos. I now had a front and side outline of each body. Here's "Jack" next to his line drawings: 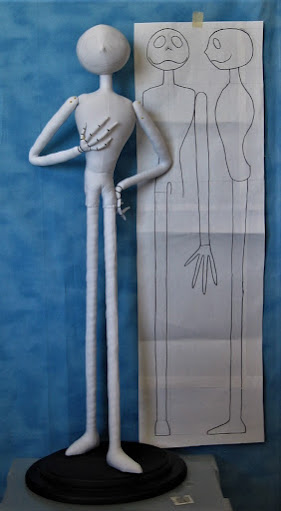 I cut out the bodies from the paper and traced the pieces onto cardboard. By cutting the cardboard in half, and gluing everything back together, I got a dimensional model of the figures. Adding newspaper and masking tape filled out the bodies. Here are some of "Sally's" body pieces: 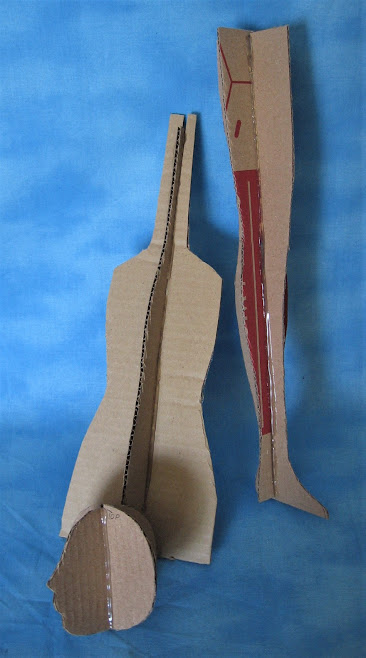 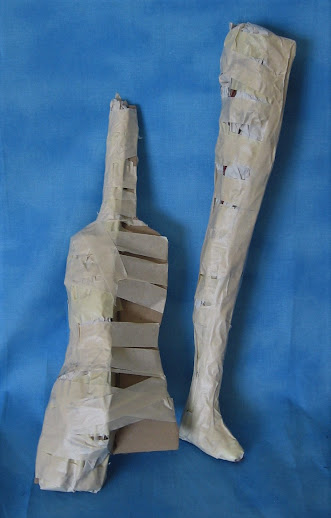 Next, I used a technique I learned long ago in college when "draping" an outfit/costume on a dress form. I took muslin and pinned it to my cardboard & newspaper model. I pinned pieces of the muslin together where I wanted to put the seams. (This same technique is explained in Robert McKinley's books "Dollmaking, One Artist's Approach" and "Sculpting Dolls in Paperclay") This is half of the "Sally" torso: 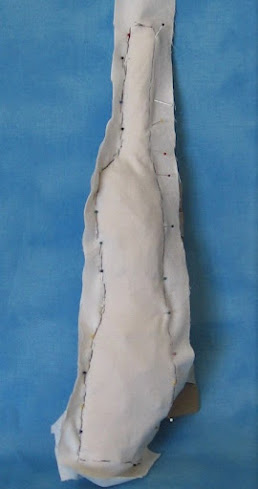 I transferred the rough muslin patterns to paper and straightened everything out. With the new paper patterns of the dolls, I was able to make the basic dolls in "deerskin" fabric. (Fabric available at "Dollmaker's Journey" or on some Etsy sites) Here are some "Sally" body pieces stitched in muslin to check if the pieces match the scale drawing. You can see the (hand-dyed) light blue deer suede fabric for the finished body. 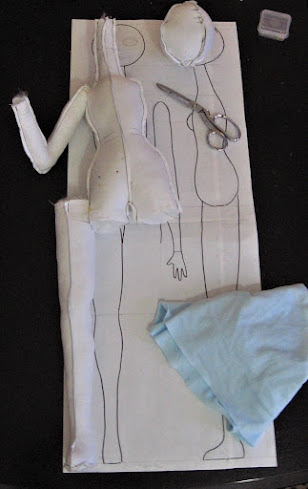 These dolls needed to stand by themselves, so the legs needed heavy wire armatures (9-gauge steel fencing wire found at a hardware store) that goes from outside the bottom of the feet all the way up to the neck of the body. I taped the armature wire to wood dowels in the legs for extra strength. You see the taped wood dowels sticking out of the tops of the legs (for some reason I used black tape on one, and white tape on the other!). I try to finish the legs as much as possible before attaching them to the body.

I joined the 2 leg armature wires in the torso, (with the back seam open) so both wires were taped together and went into the neck. I stitched the stuffed legs to the (unstuffed) body, so I could join the wires together to form a "spine". After the legs were attached to the body, I stuffed the body and neck as tightly as I could. The wire in the feet goes down into holes I drilled in the wooden bases.

I made the head, arms, and hands separated and stitched them to the body. "Sally" is meant to look like her body was hand-stitched together. I drew the "seam lines" onto the fabric body with a blue ink pen, then stitched over the seam lines with black thread. 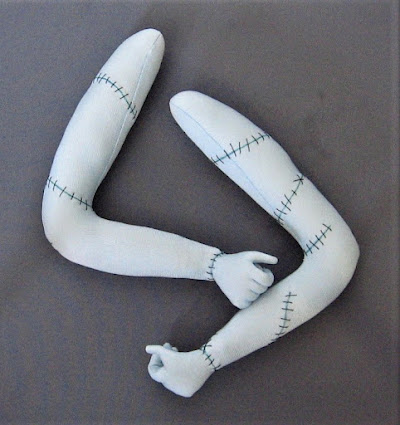 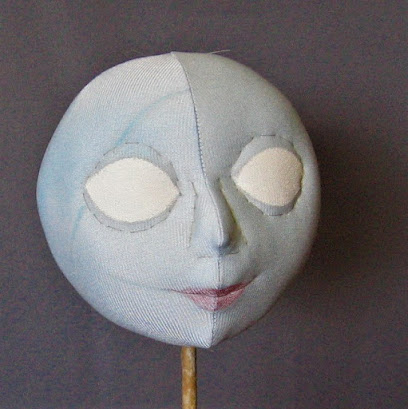 Next came the costume. "Jack" has a very distinctive black & white striped suit. I tried to find stripe fabric in scale with the body and couldn't find anything. Also, I noticed the stripes are not straight up & down but looked more "sketchy" & wavy -- like a wood-grain pattern. So, I painted the stripes onto black satin, using a dimensional paint (Tulip brand) from a squeeze bottle. It went faster than I thought. 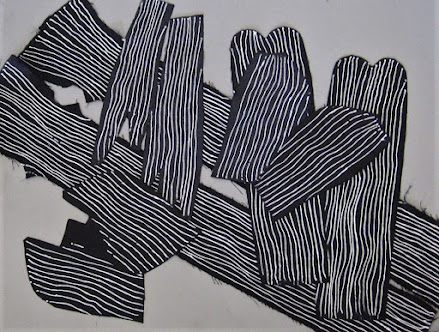 I sculpted the head of the "bat-bowtie" from paper clay. The bat wings that make the bowtie were made from thick black felt. 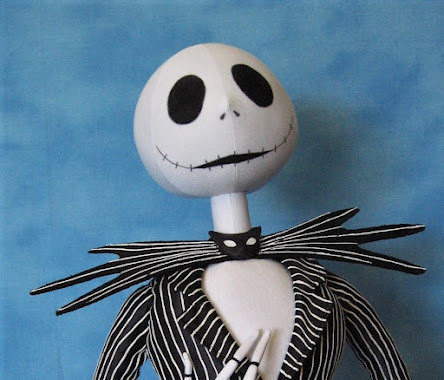 Sally wears a patchwork dress, made of specific colors, shapes, and patterns. I used craft-felt for the dress. I was able to find a close match to all the colors. I drew the patterns on the felt with a magic-marker. Some of the stripes and polka dots were made by appliqueing pieces on top of the main dress. All the felt pieces were fused to black interfacing and hand stitched together. 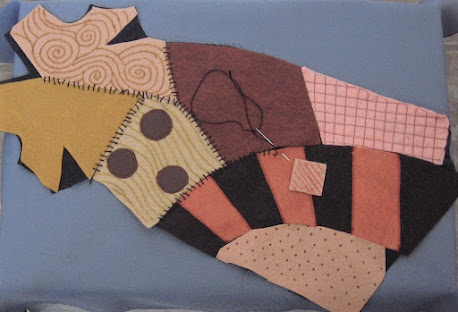 Sally has yarn hair, so that was easy. I needle-sculpted Sally's features into her face. Her eyes are painted on, coated with several layers of gloss gel. Her eyelashes were tricky. They are meant to look like pieces of black yarn tied into the eyelids. I used small pieces of cardstock heavily painted and coated, so they would stand in the right direction and (hopefully) not break. 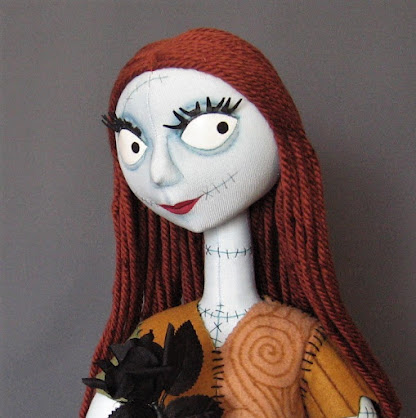