Hi All,
I made a new "hag" witch: Baba Yaga. She is an all-cloth stump doll about 16 inches tall. I will be sending her to Roger's Garden at the end of summer for their Halloween show. 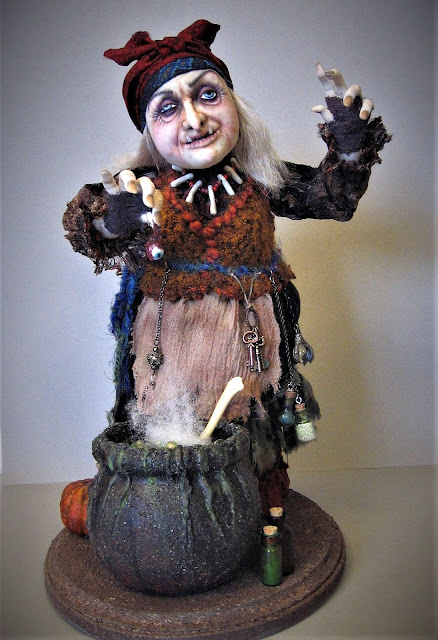 Baba Yaga is a character from very old Russian (and Romanian) folk stories. She dates back to the 12th century, (and is still popular today). ----She was the first "Halloween" witch! 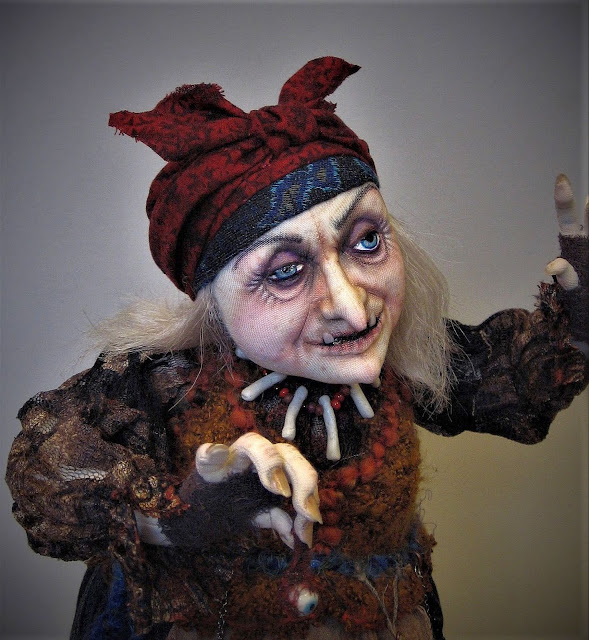 In olden times, Russian parents would tell their children, "Don't stay out after dark, or Baba Yaga will catch you". She was the American version of our "Boogie Man".

As I'm American, and was never told these stories as a child, I didn't know about Baba Yaga until recently. It turns out, I had seen many images of her, but didn't know who she was. So, I did some research on her.

I made her standing over a steaming cauldron, making a potion. She is holding an eyeball (animal? human?) and is about to add it to the pot. 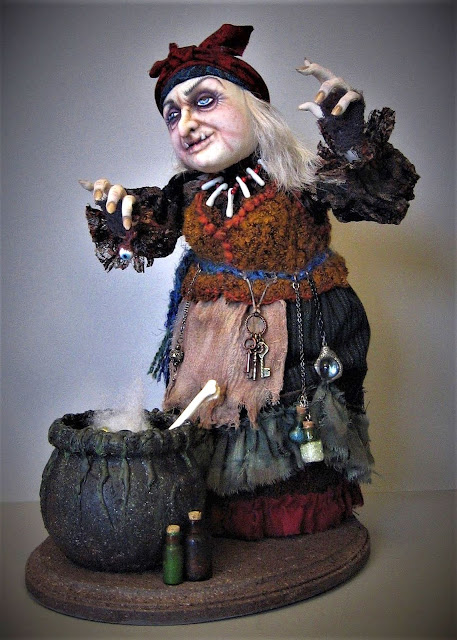 She is wearing a traditional babushka (Russian for "head scarf" ) on her head. Baba Yaga's babushka is usually tied in front, on her forehead, with the end of the ties pointing up -- like devil horns.

Her fingernails are made from a drinking straw. I cut the straw into a thin, long strip. I then painted the strip, cut them to size, and glued them to the tops of the fingers. I painted several coats of matte medium over (and under) the nails to make them as strong as possible. 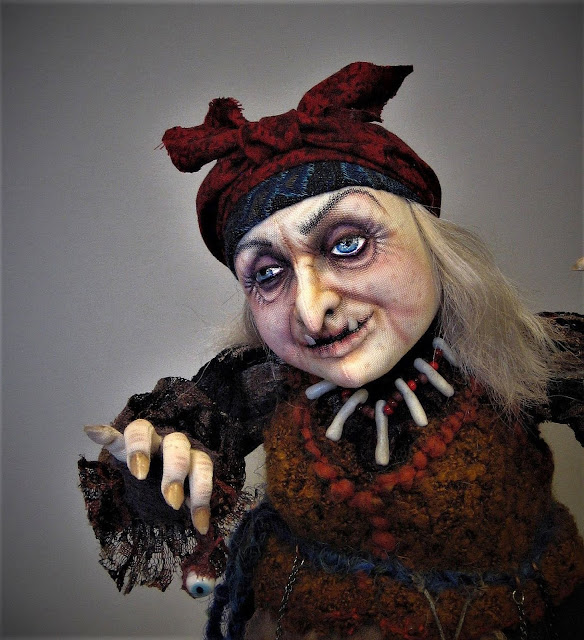 Also traditional for Baba Yaga are her teeth/fangs. She usually is seen with one or two teeth sticking out from her bottom lip. I made these from a straw as well.

The "bones" on her necklace are made from 2-part Apoxie sculpt. After they dried, I strung them with some wooden beads. 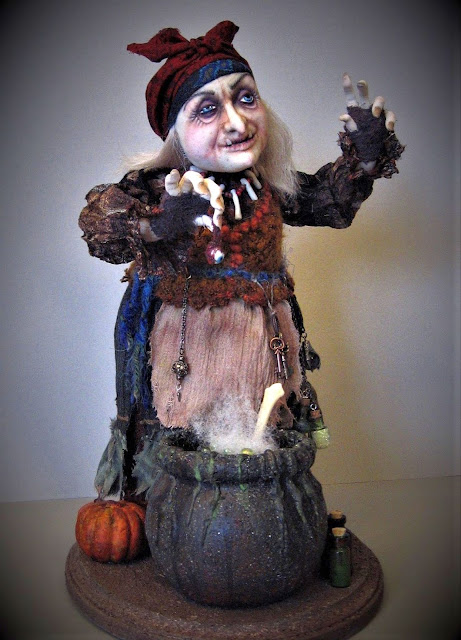 I love making "witch belts" (my word for it). It's sort of a utility belt for all the things a witch might need to have at hand. Baba Yaga has a silver amulet (a textured bead with findings), keys (charms), potion bottles (filled with tiny beads), and a crystal ball (a Halloween finding) hanging from her yarn belt. 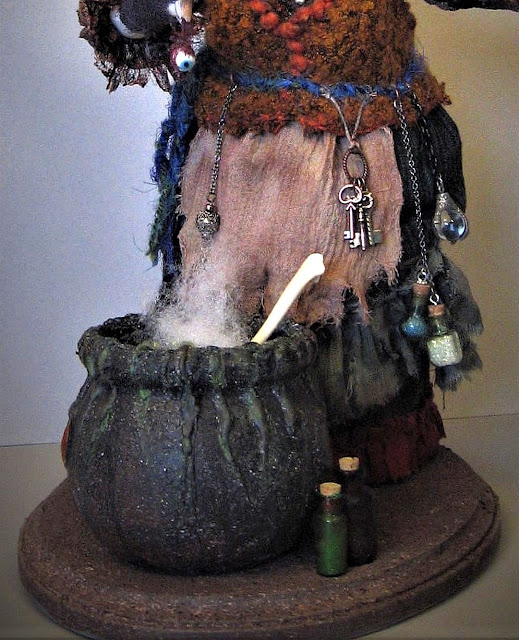 The "steam" coming off the cauldron is just stuffing (polyester fiber fill). I glued some to the surface of the potion (cotton fabric & stuffing, jammed into the plastic Halloween cauldron). I pulled it up & sprayed it with hair spray so it won't come apart too quickly. There are some more potion bottles next to the cauldron. And, that's a chicken bone (cut in half) she's using as a spoon, sticking out of the pot.

I put some pumpkins at her feet, even though I'm pretty sure that pumpkins, or Halloween, have nothing to do with the Baba Yaga legend. But, since most of my customers are American, I put them in. 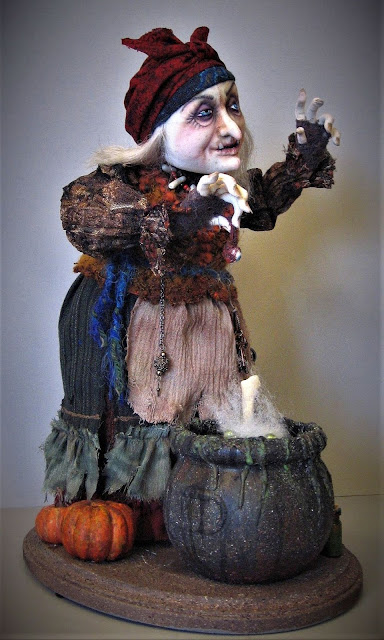 I like how she turned out. This is my second "hag" witch, and I really like making them. I think she will be my next pattern. 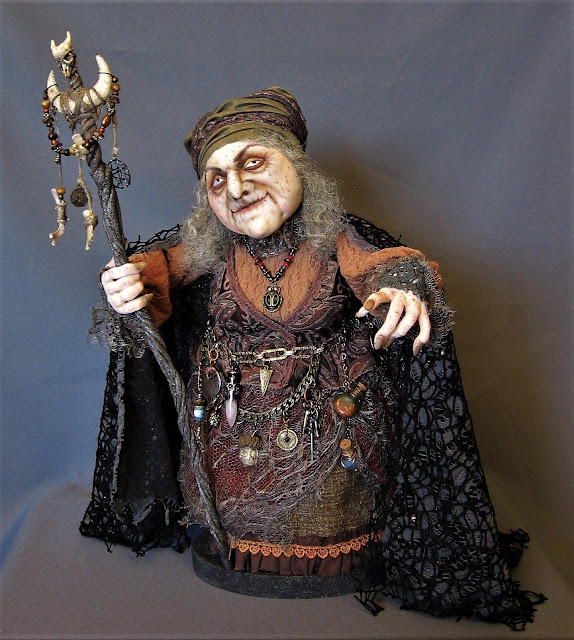 Have fun, keep your distance, and wash your hands!
AB

Hi All,
In my mixed media/art club, we had a "Black & White" challenge. (This club is for all type of art -- not just dolls.)

I had lots of ideas for a black and white theme, but I kept coming back to "zebra". To me, a ZEBRA print is the epitome of glamour, high camp, and a bold statement. I mean, when you wear zebra, everyone is looking at YOU! 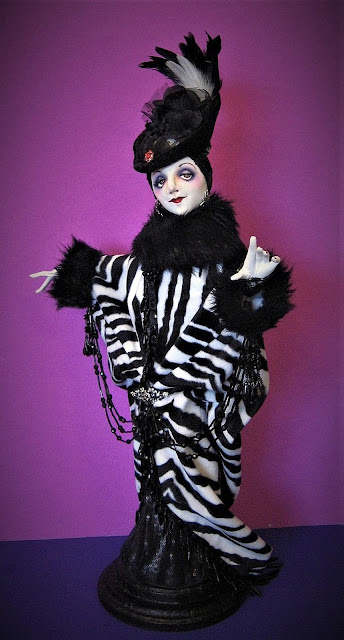 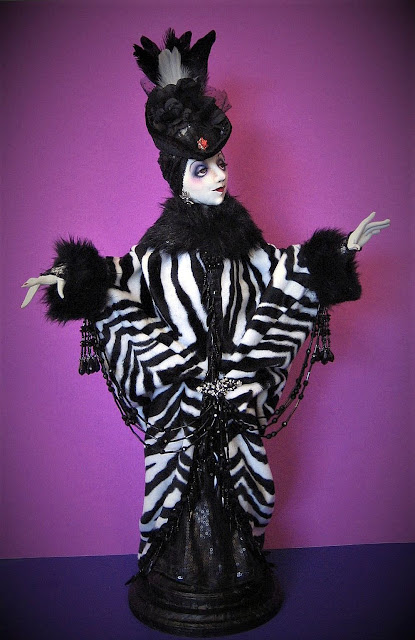 I made a simple stump doll and dressed her in the coat and hat. This is what a lady might wear when going to a fancy ball or the opera -- anywhere she could make a dramatic entrance! She would then drop her coat and continue to walk up (or down) a grand staircase to the evening's event. (Perhaps she might drag her coat behind her while walking very slowly.) 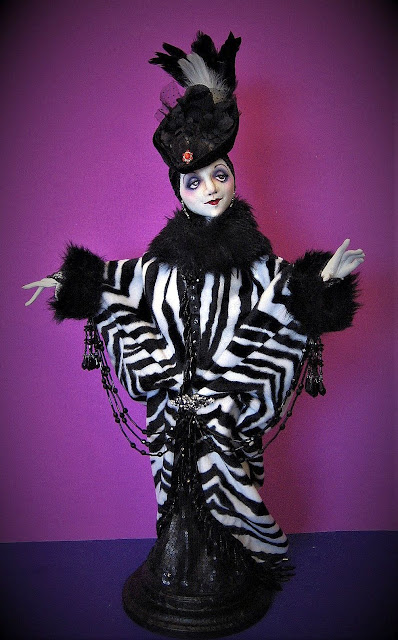 This doll is about 22 inches tall, so I was lucky to find a zebra print in this scale (it also has a small nap to it).

Hats of that period were either very tall, or very wide. 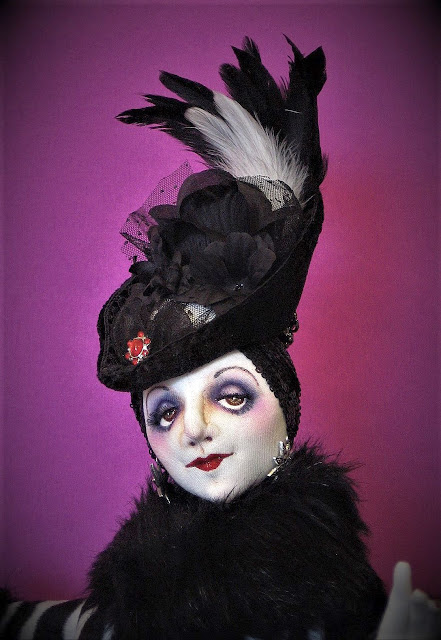 I added the red jewel just to throw off the color scheme a bit. 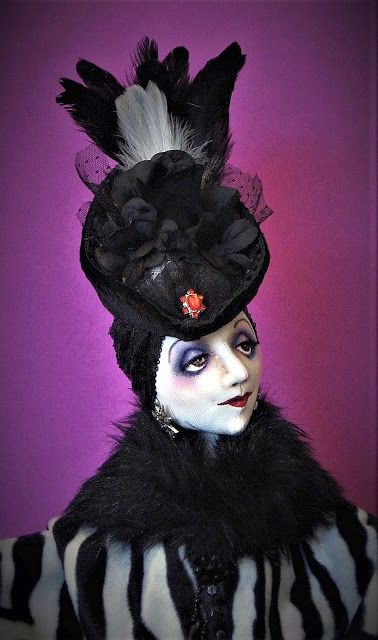 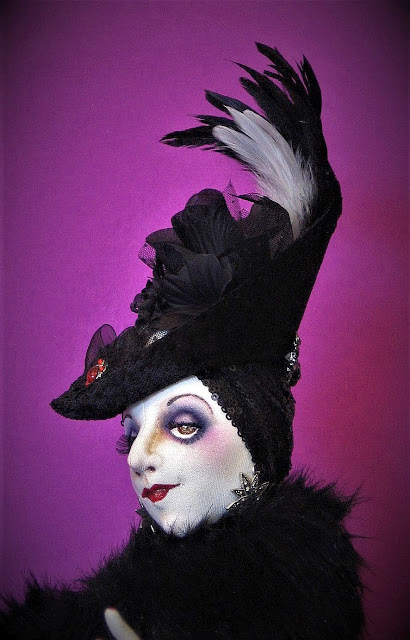