Hi All,
I have been making dolls to sell at a home & garden store in California, called Roger's Garden. They do "special boutique events" 3 times a year for Christmas, Halloween,  & Easter/Spring, where they sell one-of-a-kind art along side their seasonal merchandise.

They asked me to make dolls for the Halloween event last year, and this year asked if I would make 3 specific dolls to help advertise their Halloween event, titled "Malice in Wonderland" (An "Alice" theme with a darker look to it). I was to make the Mad Hatter, the Queen of Hearts, and Alice. I started working on this project in February.

So, I thought I'd share with you one of the character dolls I made, the "Mad Hatter". 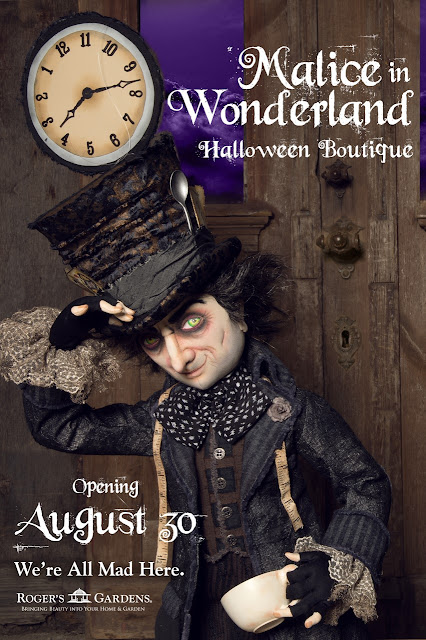 First off, I started with a sketch of my ideas so everyone involved can see if I'm on the right track with their thinking. 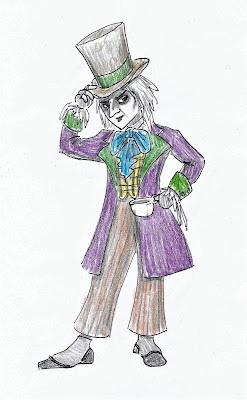 They liked the sketch, but asked to make the colors darker (black, brown, & gray) and to make him a bit more shabby and raggedy.

The store also asked that the doll be about 3 feet tall. Making a 3-foot tall doll out of cloth, with legs, wearing a large top hat would be tricky to keep upright and balanced. I knew I had to have a strong armature inside, especially the legs. My plan was to use a thick wire armature that went through the legs, out of the bottom of the feet, and into a strong wooden base. I used a 9-gauge wire that I had to cut with bolt cutters and bend with pliers and a vice.

The next thing to do was to make the pattern. After several tests, I came up with a pattern with the height and proportions I thought would work. I stitched and stuffed all of the body parts and pinned the whole thing together, to see what it would look like. (I sent the store's art director a picture of me standing behind the doll to show the scale and height.--- I'm never happy when I have my picture taken.....) 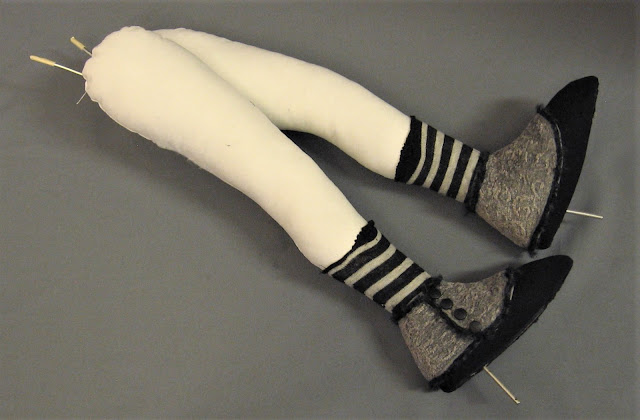 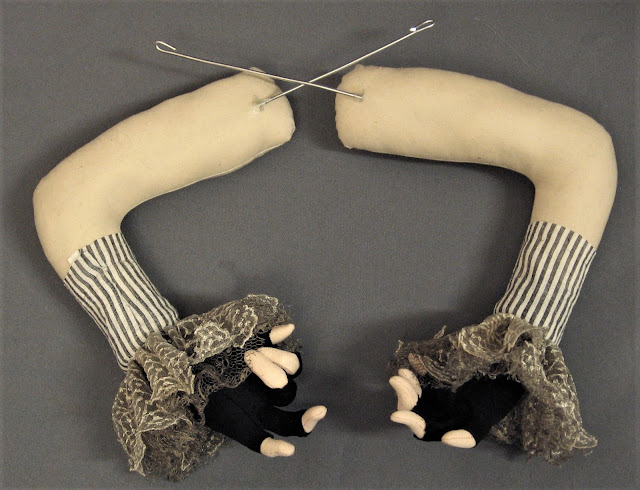 Dressing a doll with a strong wire armature NOT made to bend, is tricky. Most of the clothing had to be made with seams open in the back that was hand-stitch together after it was on the body. To make it look ragged, I ripped most of the edges and did not finish them. I stitched patches on the pants and jacket and aged the fabric using stampers ink. On some of the clothing, I stitched yarn or chenille trim on the edges to make it look worn.

I gave the Hatter some props: a tape measure around his neck, and a tea cup in his hand. The tea cup is cobbled together using a small plastic bowl and the handle from a child's plastic tea pot (a child's size tea cup was too small.) The tea spoon is in his hat brim. 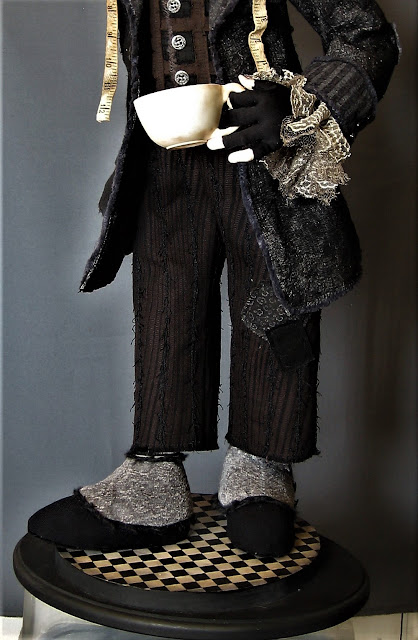 After sewing the Hatter's head together, I needle-sculpted the features. I even made ears! (I don't usually make ears, but the Hatter is always rendered with large ears). The face was colored with acrylic paint, colored pencils, and chalk. The hair is fake fur. His hair was going to be a pale gray, but was changed to black with gray streaks. (Without his hat, I think he looks like Jonny Depp as Sweeny Todd!) 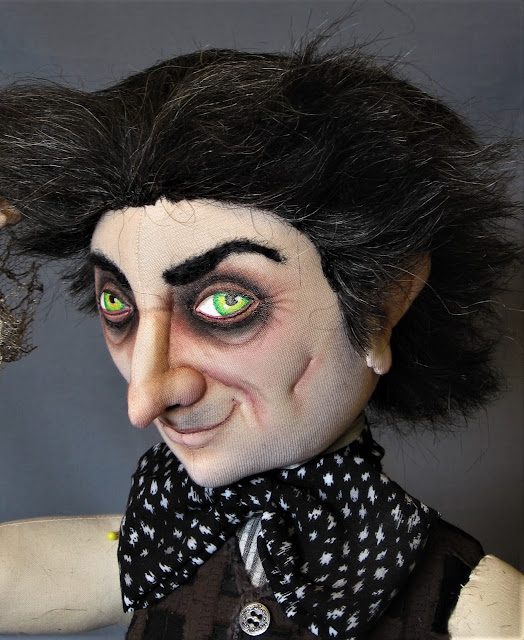 I made the top hat base out of wired buckram, covered in an embossed velvet. Because the hat is so big, I wanted it to weigh as little as possible (but still be strong enough to withstand shipping and handling). A request from the art director was that the top of the hat be hinged so it can open. I decided to put a backward clock-face on the inside of the top of the hat with the dormouse curled up, sleeping (or dead) inside the hat. 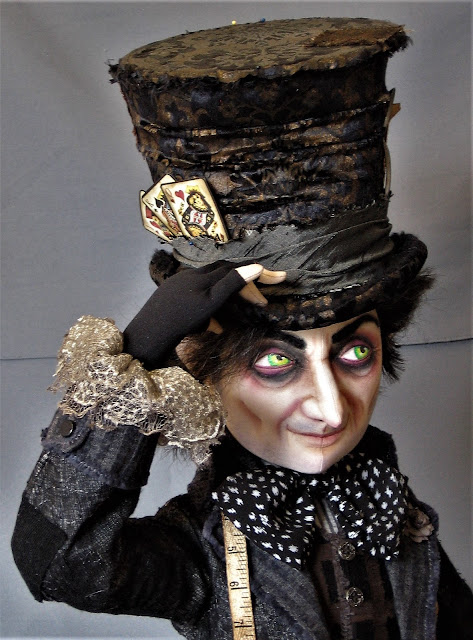 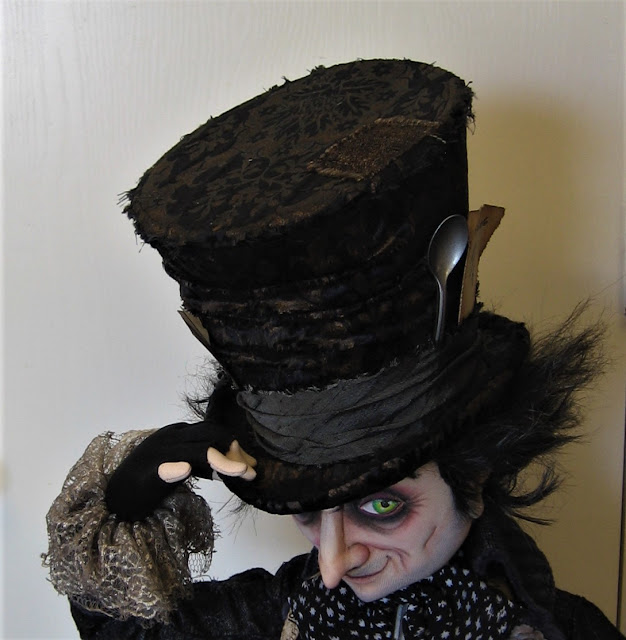 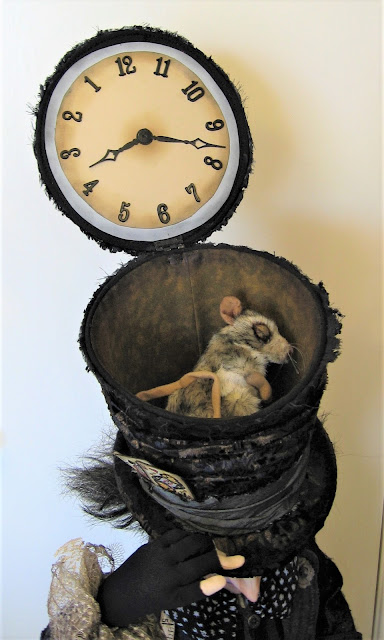 Roger's Garden is in Corona Del Mar, Calif. The Halloween event runs from Aug 30 to Oct 31.

I'll post more about this project, making Alice and the Queen of Hearts. Stayed tuned!