Hi All,
Well, as I promised, here is the finished doll: 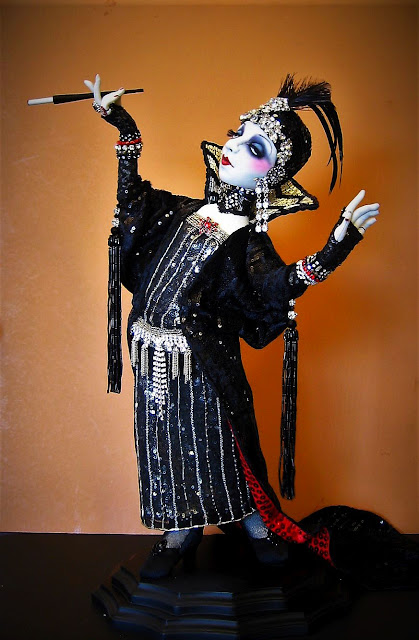 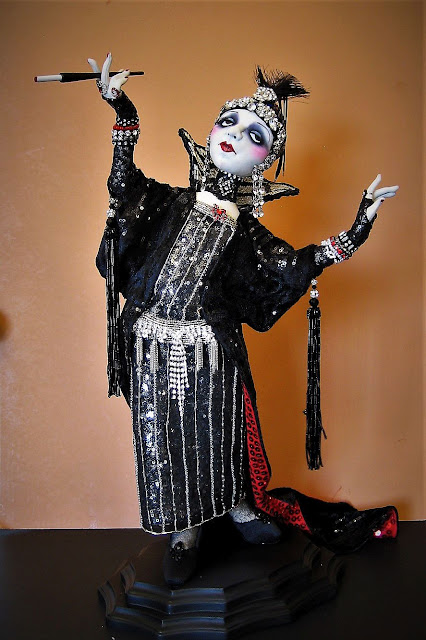 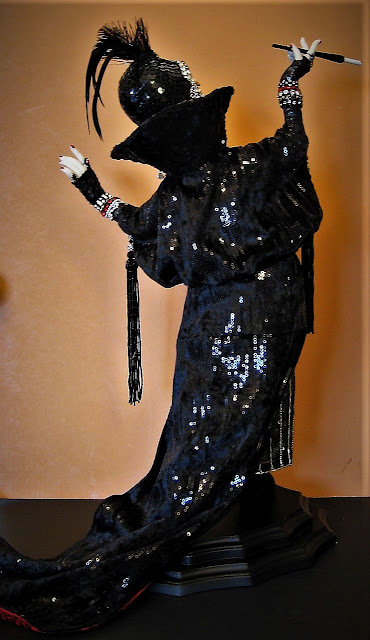 A friend of mine said it reminded her of Liza Minelli from "Cabaret" -- Yes, I see that.

Here are some close-ups: 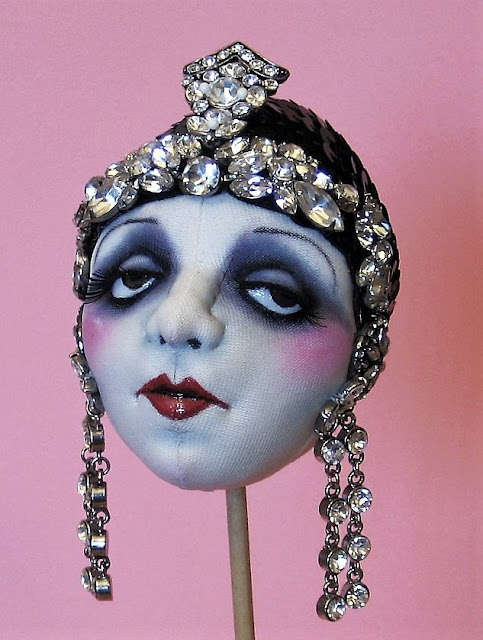 The "helmet/turban" is made from sequin trim wrapped around the head. The headband is an old rhinestone necklace with some earring pieces. 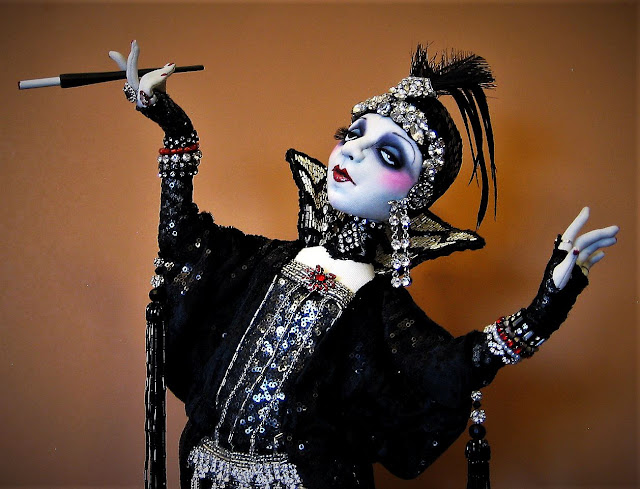 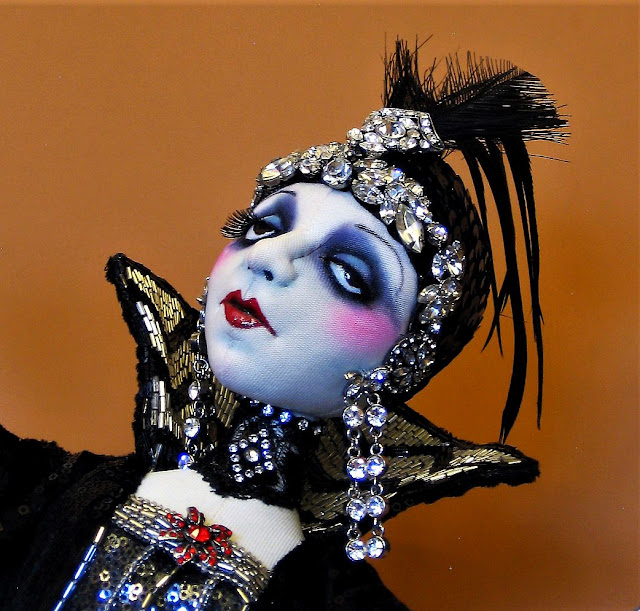 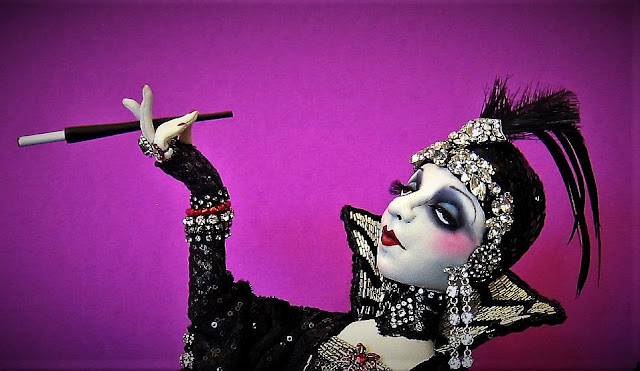 And, here are some WIPs: (see last post for work-in-progress photos of the body)
When I start a costume, I usually will "drape" some muslin into the shape that I want. For the 20's silhouette, it's basically a tube of fabric that hangs from the shoulders. The waistline is very low - almost to the middle of the hips. (I know, ---doesn't look very glamourous at all.)

Here's the under dress, made of micro sequins in silver. I wanted to give the final look as much sparkle as possible, as I have learned that "all black" doesn't photograph well. 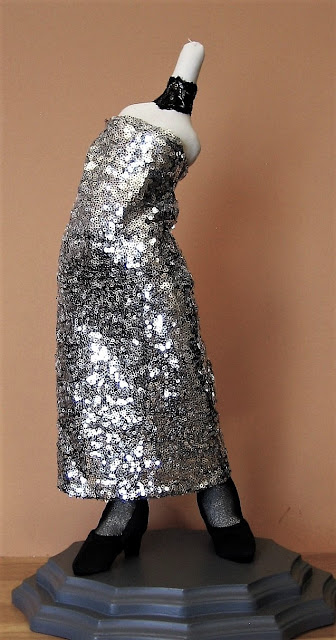 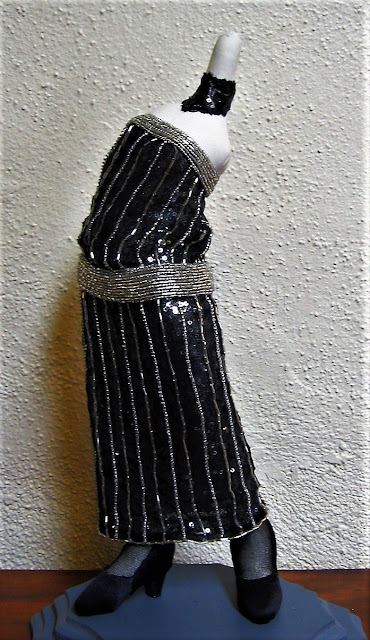 See how the silver sequins sparkle under the chiffon between the beaded lines?
The neckline and hip band is made from edging from the same old dress.

Fortunately, I've made this "opera coat" (sometimes called a "cocoon coat") before, so the pattern was easy for me. 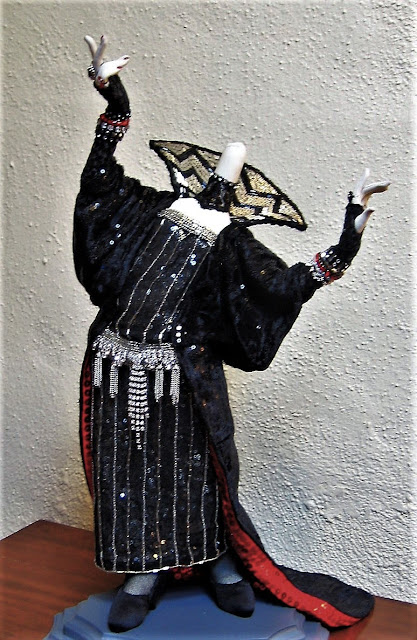 I added the red sequin lining to the coat, (and other shots of red in the jewelry) to add an accent to the all black & silver.

This is the photo that inspired the face and the shape of the turban/cloche/helmet.
I LOVE her nose! I tend to do small noses, but on this doll I made a large nose, and I like it! 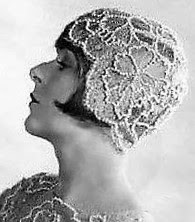 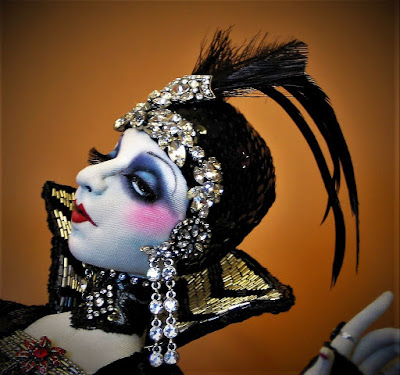 I haven't settled on a name yet. I'm thinking of "Silent Screen Star". Or, simply "The Vamp",-- but I'm not sure if everyone (young people) knows that term. (A "Vamp" --short for "vampire"-- is an old-fashion name for a woman who seduces men for whatever she can get from them. After she taken him for everything he's got, she throws the man aside like yesterdays laundry, crushing him in the process.) This was a "stock" character in the silent movies.

This look is based mostly on Theda Bara, who was known as "The Vamp" in silent pictures. This is Theda Bara: 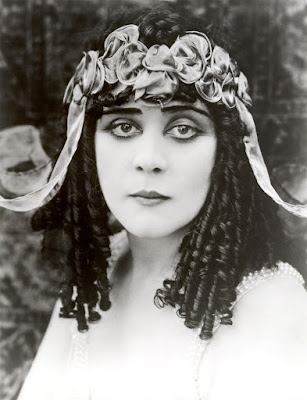 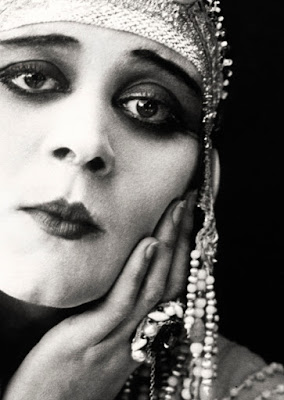 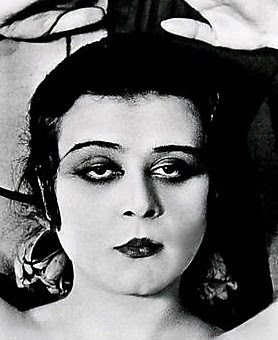 GREAT EYES! So much eye liner! And such dark eyes --she was really working that "sultry, smoky eye" look!

This was Theda much older, taken in the 1950's before she died. 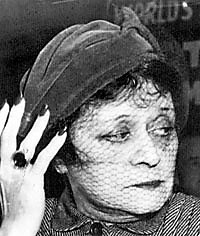 She still has those eyes! She looks sort of tragic and sad. (I'm keeping this photo in my inspiration file.) Truly, a "fallen beauty" -- which is a favorite theme I like to use.

These are other silent movie stars I used for inspiration: This is Clara Bow. 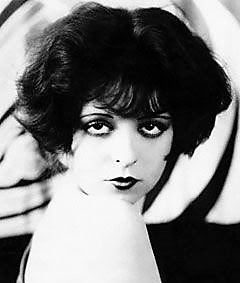 Clara Bow was known as the "It Girl". I guess "it" stood for a woman who is out to have a good time. Plus, she had sex appeal. Maybe a little naughty? In the 1920's, we had just come out of World War I, and was ready to have some fun. That's when the "flapper" appeared. 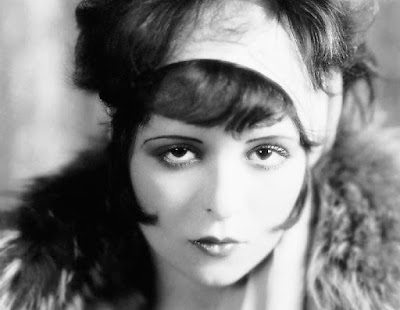 Other stars who were inspiration were May Murray: 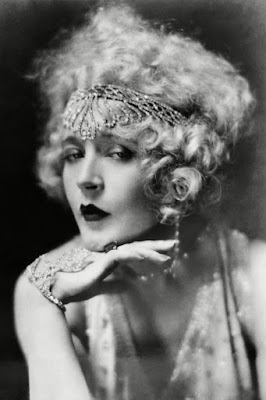 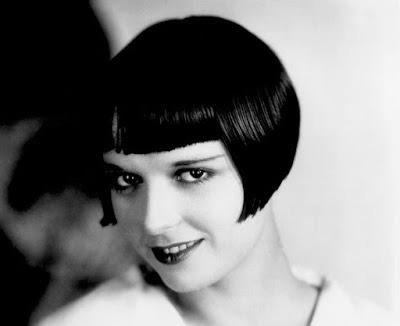 Louise Brooks was famous for introducing the "bob" haircut in the 1920's -- a hairstyle that became most popular with the young flapper girls and quite controversial for it's time. (The 20's was the first time in history that women wore short hair!)

Hope you enjoyed seeing my process.
Have fun!