Hi All,
I've been working on a new doll for the "Art Doll Quarterly" 1920's challenge. It's not done yet, but here are some work-in-progress photos.

I want to design a silent film star, a "Vamp" character.
So, I started with a dramatic pose. 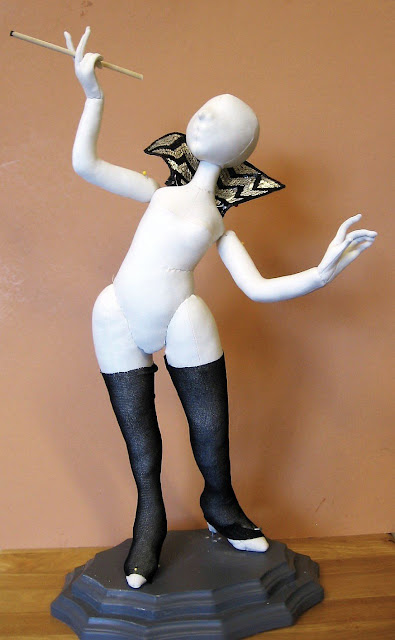 This is a big doll -- about 20 inches. So, to make her stand up-right on it's own, I used an extra thick wire armature in the supporting leg, and my basic wire armature in the other. The wires come out of the heels of the shoe into the wood base. I sculpted the heels around the wire, using paper clay. I made black stockings for her, which I have to put on before I sculpt the heels, as the stocking won't go over the heel AND wire armature without ripping (I learned this the hard way on dolls in the past.)

I found this triangle beaded applique in my stash and thought it would make a great collar for her.

And, of course, she has a cigarette holder. (The cigarette holder has become a signature of mine, and I don't know why. I guess it makes me think of old-time glamour, as only very rich and glamourous women used them in old movies. The more stylish the woman -- the longer her cigarette holder was.) 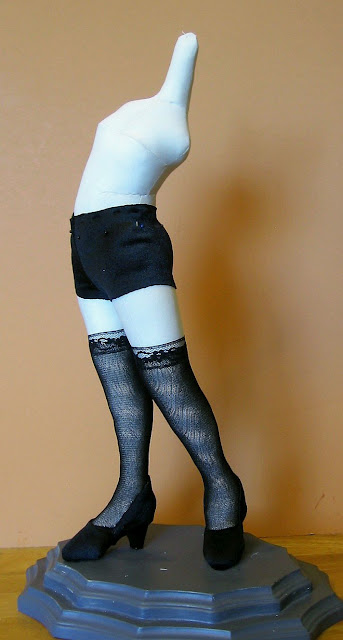 Okay, now I've made the shoes -- which I hate doing! Shoes are very hard for me (which is why I don't make them that often. Most of my dolls don't have legs!) I made the shoes in two parts - front and back, and fitted them to the feet. 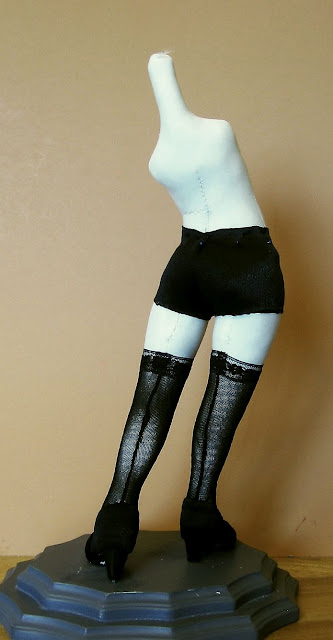 Get those seams straight!

I also made her underwear (which you won't see in the finished costume). I make them for the people who like to look up her skirts (and they always do!). 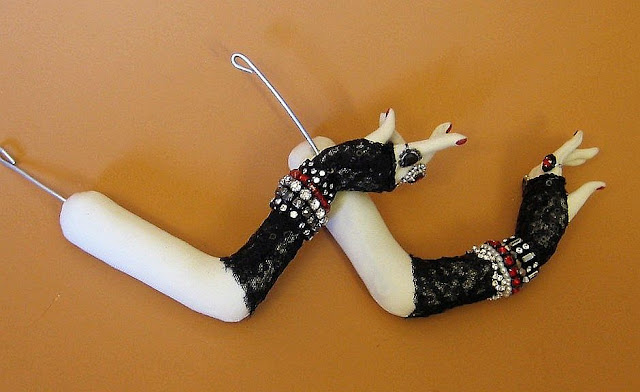 I like to put a lot of work into the hands and arms. I do all the work before I attach the arms to the body (so much easier!). In my design, she will have heavy sleeves, with maybe some beaded dangles as well, so I added wire armature to the arms to help support the heavy sleeves. --It's tricking trying to anticipate what the problems will be with the costume before you make it, but it's always better to have too much support, then not enough. (I HATE going back and re-doing something after it's all done.)

Here's a close-up of the head: 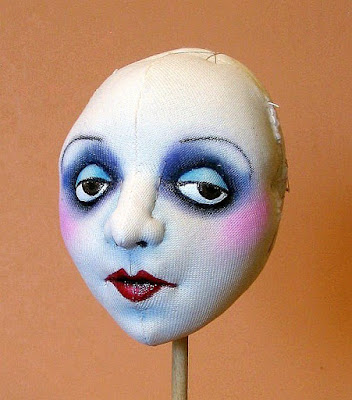 I looked at a lot of research while designing this doll, both costume and make-up. The actors in silent films wore a lot of make-up. It was a time with cosmetics really started to sell to the masses. I think the invention of movies help sell the make-up. In the 20's, ladies started wearing lipstick (done in what they called "bee-stung lips", with the lipstick focused on the middle of the lip), rouge, and lots of eyeliner.

Okay, here she is, all pinned together before I start the costume and headdress: 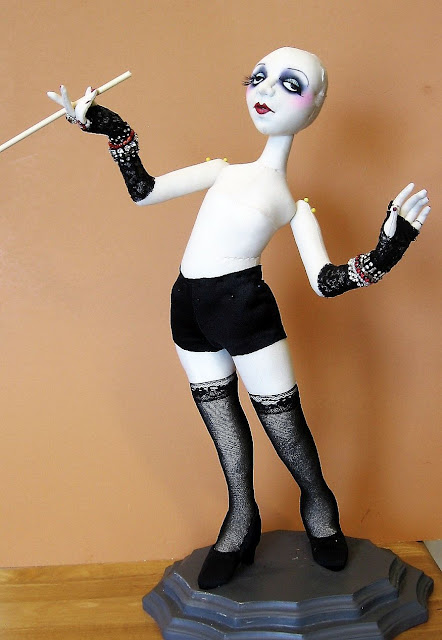 Stay tuned, and I will post more photos of the finished doll!  -Have fun.
Posted by Arley at 8:17 AM 3 comments:
Newer Posts Older Posts Home
Subscribe to: Posts (Atom)