Hi All,
Here are some more of my "Elegant Beasts" dolls. They are all made from bird skulls.

They are all cloth stump dolls.  This one I call "Countess Dowager" because she reminded me of Maggie Smith's character from Downton Abby. 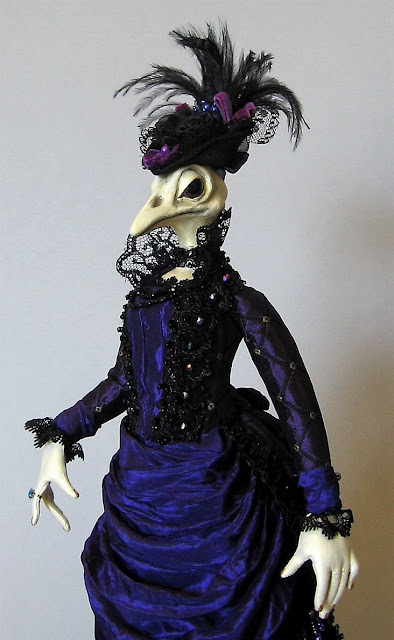 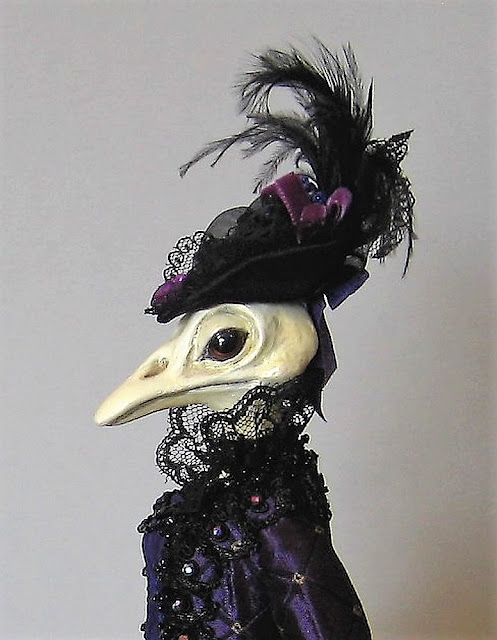 I made these dolls a few months ago for the fiber show in Houston, but I'm behind on posting them. 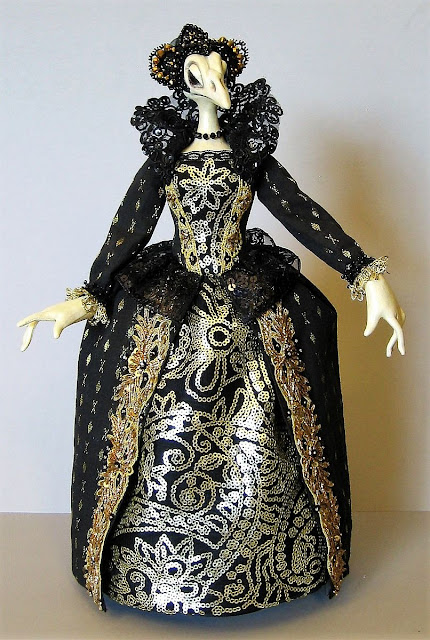 This one is the "Black Queen" 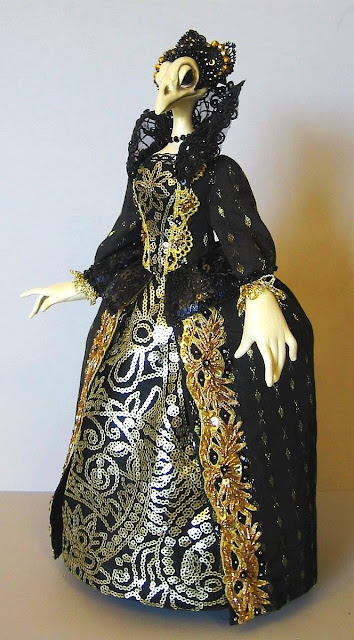 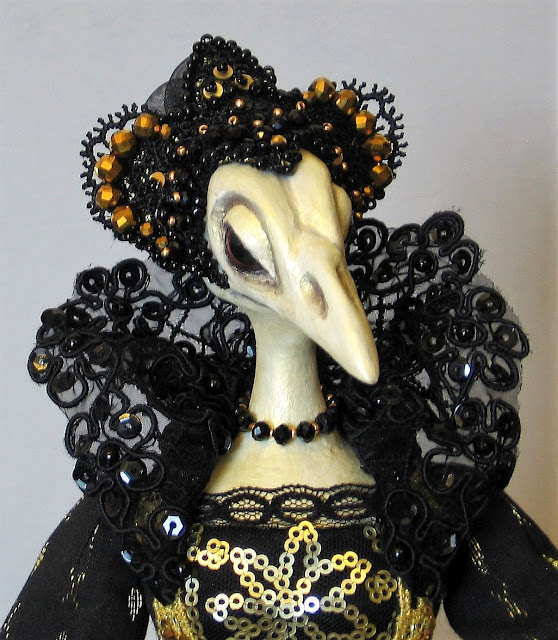 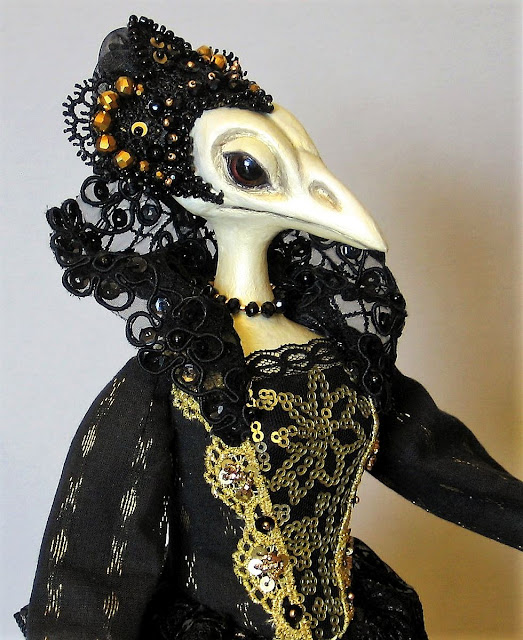 These dolls are all about 15-17 inches tall. Most of them are made with chicken skulls. I fill in most of the skull with paper clay and Apoxie Sculpt, and add the eyes. 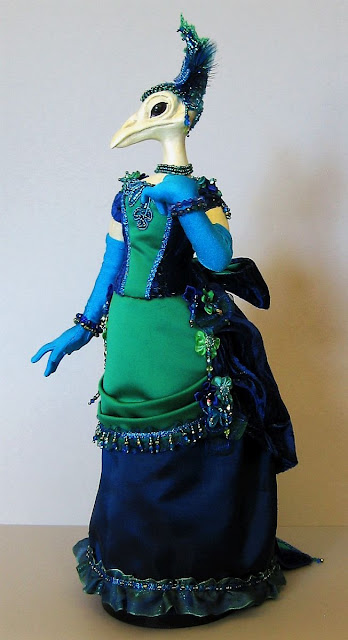 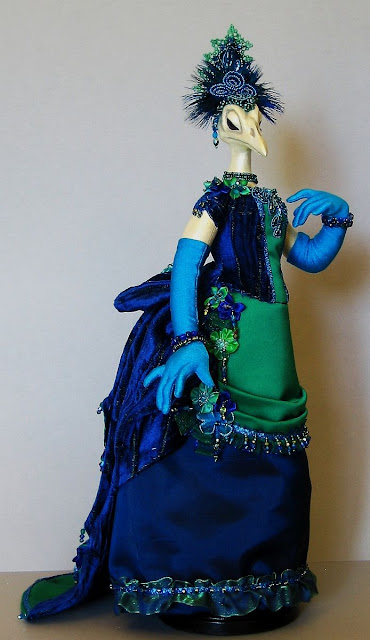 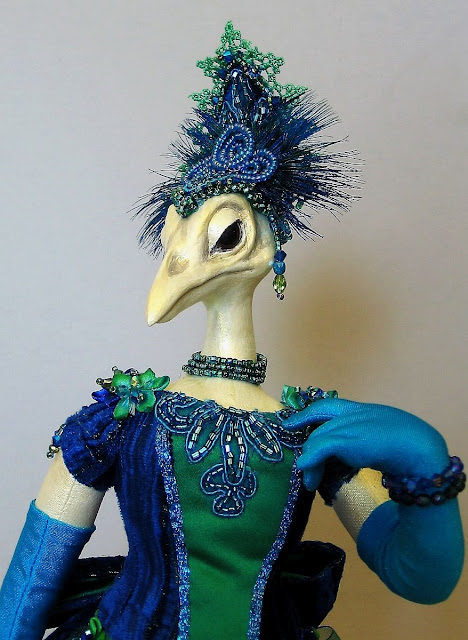 After going through so many skulls, I finally made a mold of one and cast some of them out of paper clay. 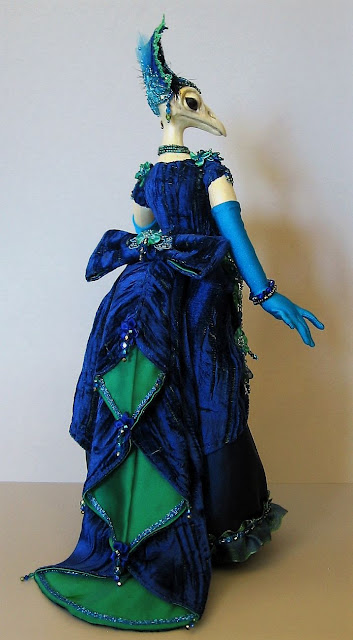 I call this one "Mourning Bird" 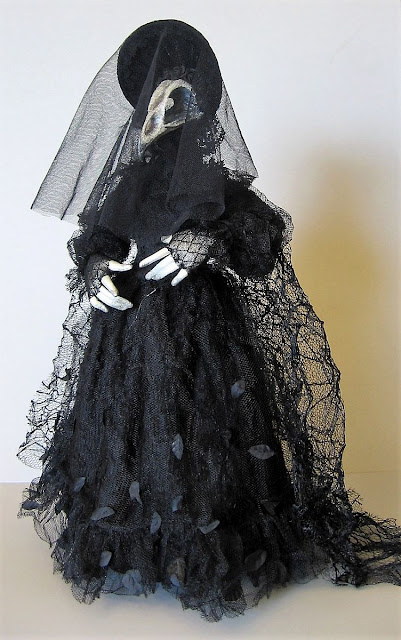 This doll is based on a character from the movie "Crimson Peak" (a gothic horror movie by Guillermo del Toro). She was the ghost of the mother of the main character. 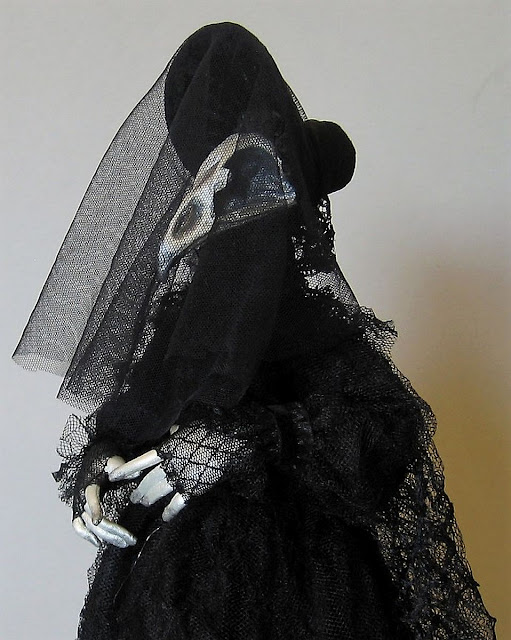 For this one, I used a turkey skull. I didn't add eyes for her, but left her more "skull-like". 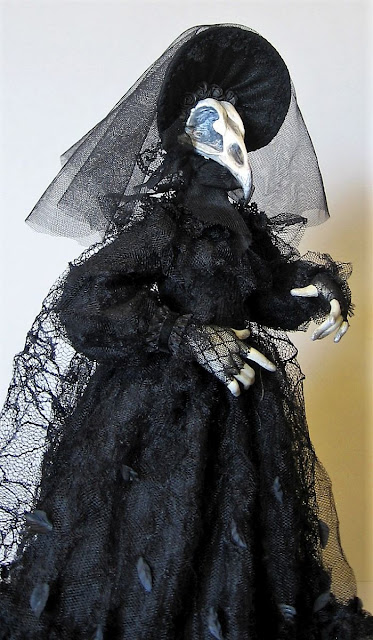 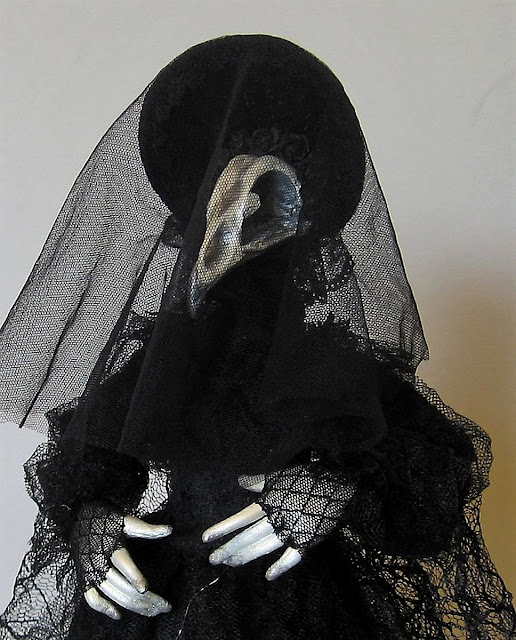 Hi All,
I'm very excited to tell you I have an ETSY STORE where I will be selling my dolls.
You can click on "ETSY" or use the button on the side of the page.

I've never used Etsy before, so this is an experiment. I hope everything works okay. 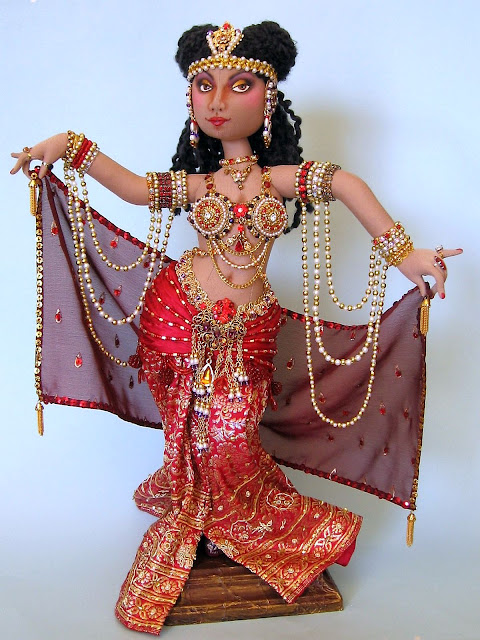 She is 16 inches tall, which is a little smaller than my other full-body dolls. 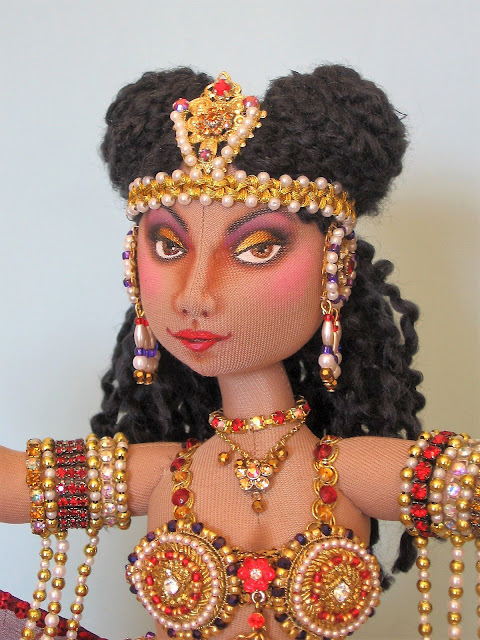 I had so much fun beading and embellishing her! Many, many days went into creating her. 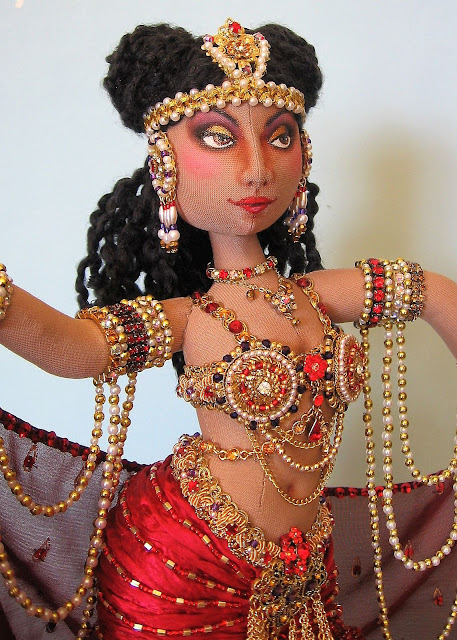 This doll has been in the back of my brain for a long time. I have been collecting research on Salome for many years. There wasn't much research on what she might wear during the biblical era, so I looked at a lot of paintings done at different times in history, and photos of people at the turn-of-century recreating her look. This "eastern belly-dance" look was the only thing they all had in common. 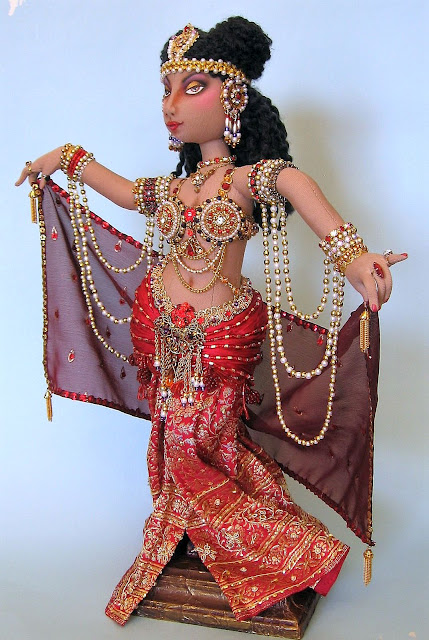 Here are some work-in-progress photos
First, the body and pose: 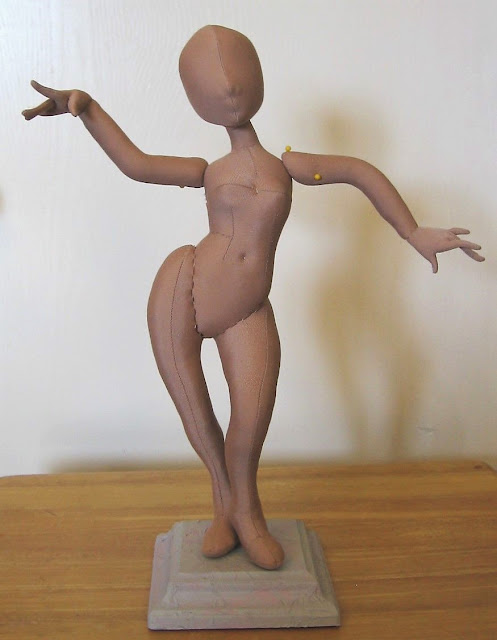 After looking at this photo, I decided the head was too big, so I reduced it and made a new head.

Next, start on the skirt & belt. The skirt is part of an embroidered sari I've had for years. I layered more fabric, trim, beads & stones on top of the skirt. I pinned on some jewelry to see what I liked. 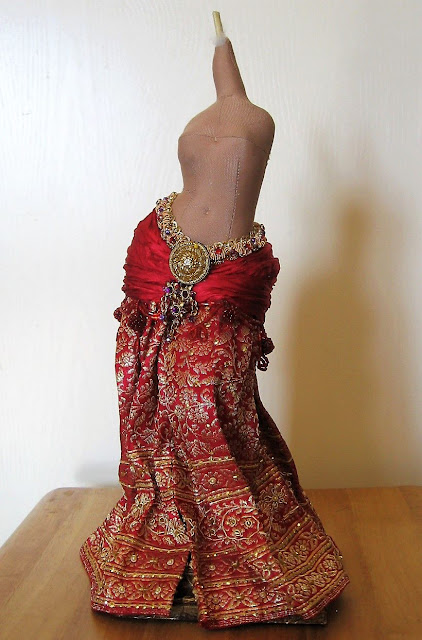 I made the 2 cups for the bra from some old embroidered button covers I had. I added more beads and jewels to that. Here, I've also started on the arms by adding bracelets. I haven't sewn the arms on yet, as I'm thinking about adding more beads to them. (I wait until the arms are completely done before attaching them - so much easier that way!) Also, I've changed out the jewelry on the belt. 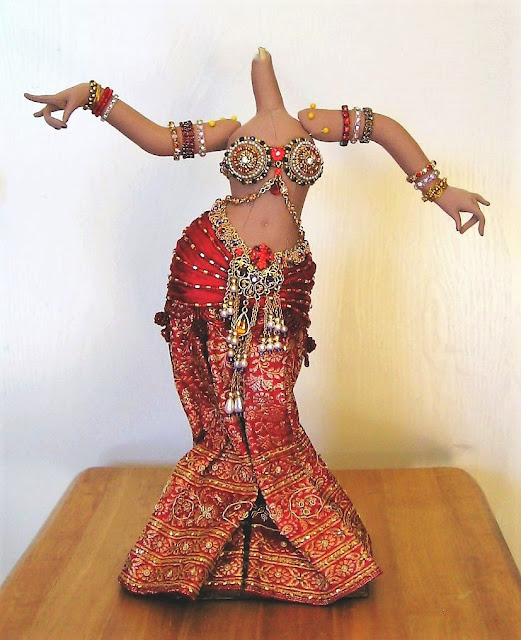 Okay, the face is almost finished. (I put my hand there so you can see the scale). This is the smaller head. 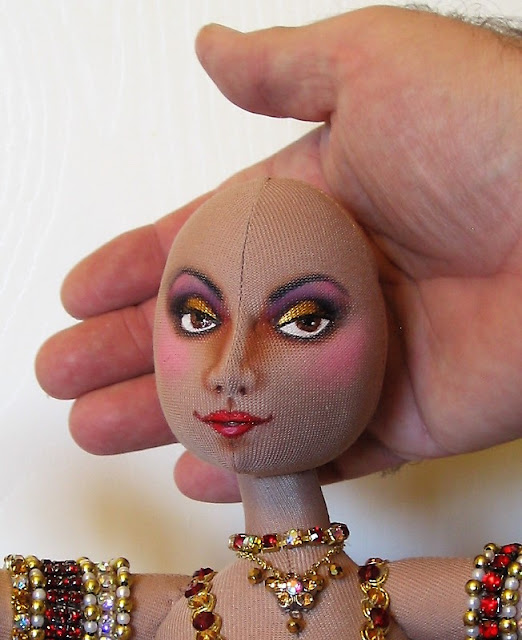 Now, starting on the hair. As I stated in previous posts, hair styling is a weak point for me. I've chosen black yarn for the wig because I love the wavy texture it has. Again, not much research available for women's hair of this period, as most covered their hair or wore big headdresses. --So, I went for a slightly extreme hairstyle with a little headpiece. 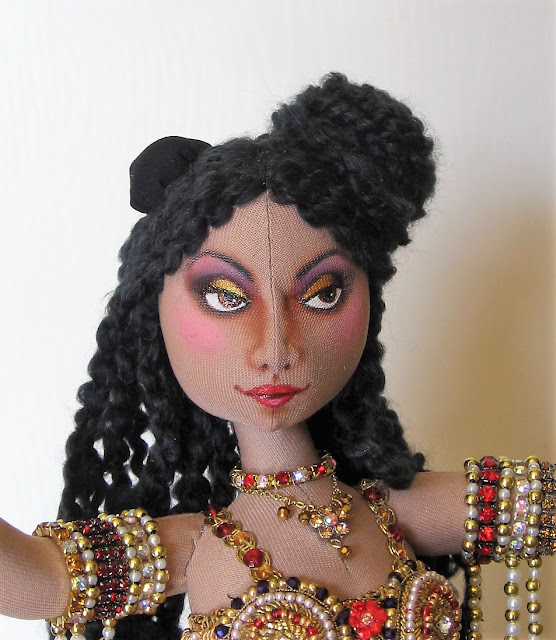 To make the 2 "poofs" on each side of the head, I stuffed 2 little balls of black cotton and stitched them to the head first, then covered them with the yarn. I made the wig using a combination of stitching, gluing, and felting the yarn on the head.

Sorry, no photos of the embroidered veil I made for her to hold.

I found the story of Salome and her famous dance very interesting. Her story comes from the Bible, told in the gospels of Mark & Mathew. Basically, it states that Salome dances for King Herod in exchange for the head of John the Baptist.

Salome was the daughter of Queen Herodias from a previous marriage, and step-daughter to King Herod of Galilee in the 1st century. Herodias was married to Herods’ brother but left him to marry the King. Not only did this marriage make her queen, but her daughter a princess. According to Mosaic law, this was forbidden as it was considered incestuous.

John the Baptist (sometimes called “Jokanaan”) was a prophet of God and denounced the King & Queen’s marriage in the streets of Galilee. He gets a strong following, and the people rise against the royal family. King Herod has the Baptist imprisoned for treason. 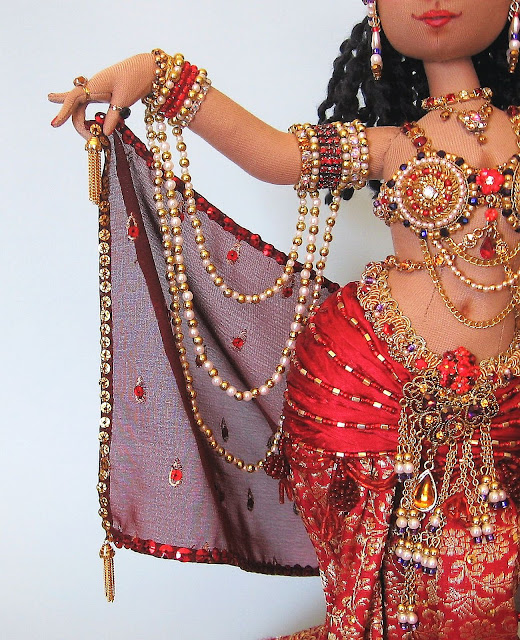 On the evening of King’s birthday celebration, Herod persuades his step-daughter/niece to dance for him. Salome does so under the condition that the King give her anything she desires. After Herod agrees, Queen Herodias insists her daughter ask for the death of John the Baptist, thus silencing him from preaching against her marriage.

After Salome dances, she asks her step-father/uncle for the head of the Baptist. King Herod is reluctant, but orders John the Baptist killed and his head is presented to Salome on a platter. Salome then gives the head to Queen Herodias.

Salome isn’t named in the bible, but is referred to as “the daughter of Herodias”. It was the Jewish historian Josephus who discovered her name when researching Herod’s family. 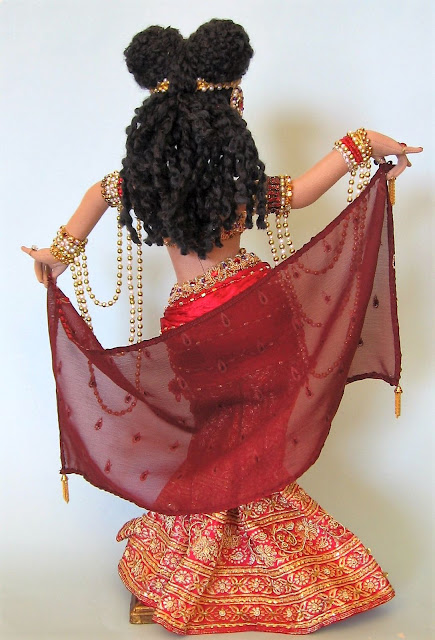 Salome’s story has been re-told many times. There have been plays, movies, operas, and ballets written about her. Salome, with the severed head of John the Baptist, is a favorite subject of many artists as well.

Oscar Wilde famously wrote a play in the 1890’s titled “Salome”. It was considered scandalous and banned in England – only making it more popular than ever. Wilde embellished the story to include a romance between Salome and John the Baptist. But, the Baptist turns down Salome’s advances, thus giving her a stronger motive to have him killed. When Salome dances, it was Oscar Wilde who names it “the dance of the seven veils”. It becomes an erotic dance of seduction, having Salome strip for her step-father by slowly taking off her veils. The King becomes very excited and aroused by Salome’s dance. It’s not clear if Salome is disgusted or pleased by the Kings’ reaction. But, she did what she had to do to keep her mother’s position as the Queen.

Richard Strauss wrote an opera based on Wilde’s play in the 1900’s. Again, the chemistry between Salome and John the Baptist is focused on, and the dance-of-the-seven-veils is prominently featured. Salome is seriously conflicted in the end when she is given the head of John the Baptist. She kisses it, while tears stream down her face. 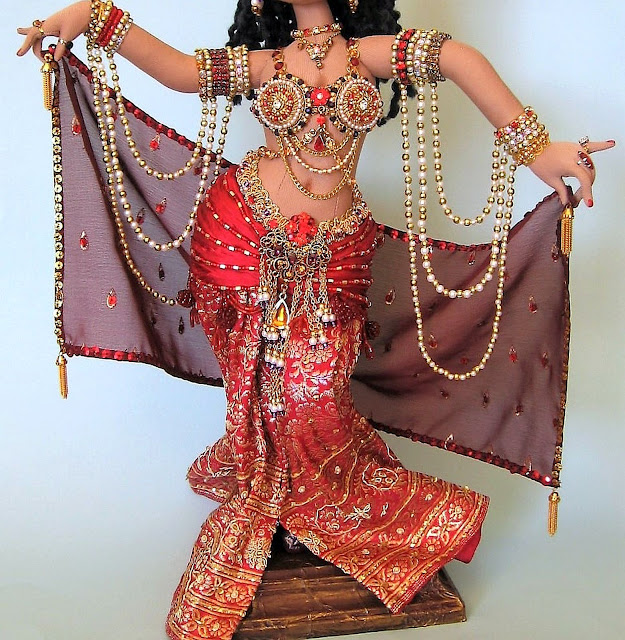 MGM did an epic re-telling of the story in the 1940’s, with Rita Hayworth in the starring role. In the movie, Salome is portrayed as a spoiled seductress. Because of the “Hays code” at the time, the writers had to add an “uplifting” ending to the story -- Salome converts to Christianity and tries to save John the Baptist. She dances the famous “dance of the seven veils” against her will, while the Queen orders the beheading of the Baptist. The movie ends with Salome sneaking off with a guard she’s in love with to hear Christ’s “Sermon on the Mount”. --Salome is saved.