Hi All,
I'm in Albuquerque, NM, where we have are Fiber Art Fiesta. We have this textile show only every other year. I made a few dolls to sell, and they have all sold! (Thanks to my friend, Pamela Armas.)

Here's my tribute to Adnan Karabay, a doll artist who's dolls were popular in the 1980's & 90's (unfortunately died in 1998). He liked to use animal skulls and antique fabrics in his historical costumes.

I call her "Elegant Beast": 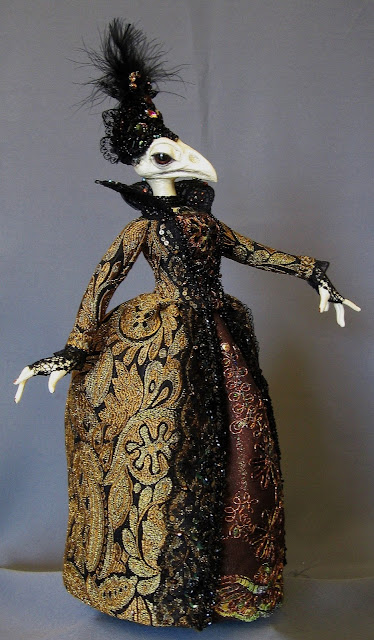 I used a real bird skull (I'm not sure what type of bird it was, -- sorry). The body is cloth, which I painted a pale gold to match the painted skull. I added some clay & animal eyes to the skull to fill it in a bit. 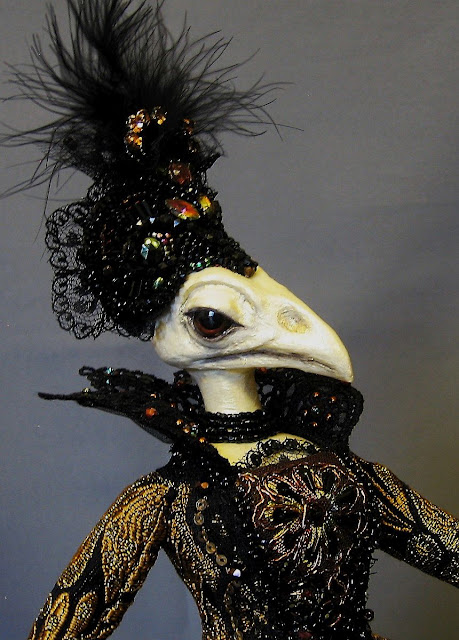 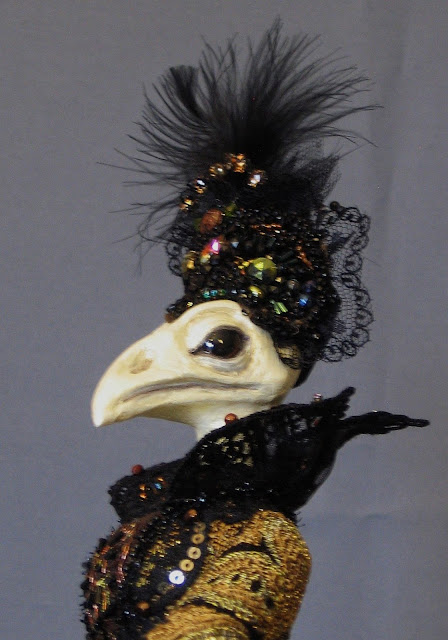 The headdress is an antique jet beaded medallion I have embroidered with more jewels. I wired the whole thing to get it in this shape and added some lace, flowers, and feathers, too. 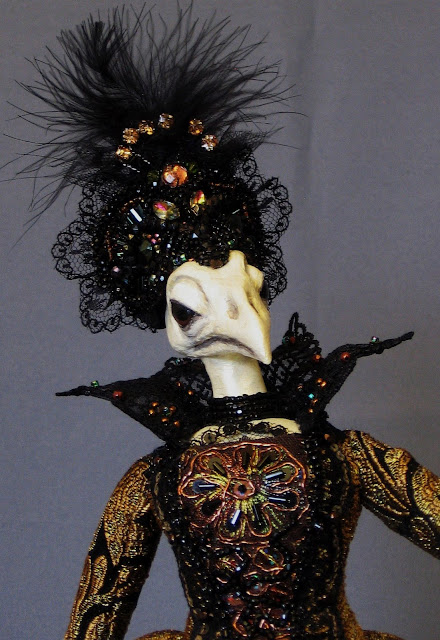 There's also some antique jet embroidered trim on the edge of the dress (hard to see in the photograph). 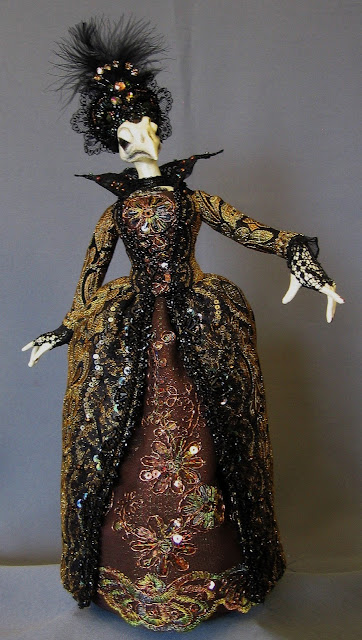 Also made some more 18th century busts of two ladies going to a masked ball.
Here is "Lady Peacock": 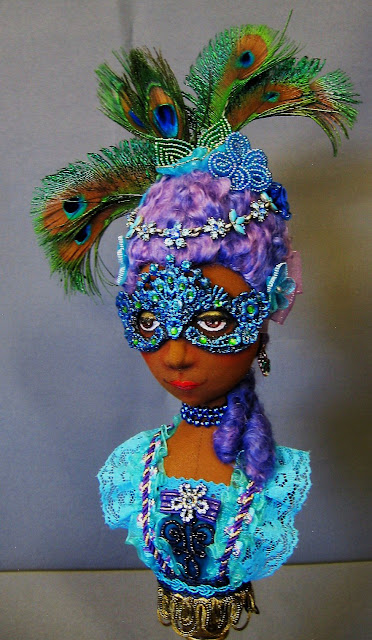 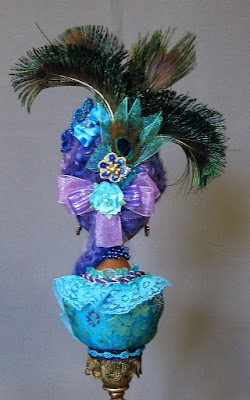 And, her companion, "Madame Butterfly": 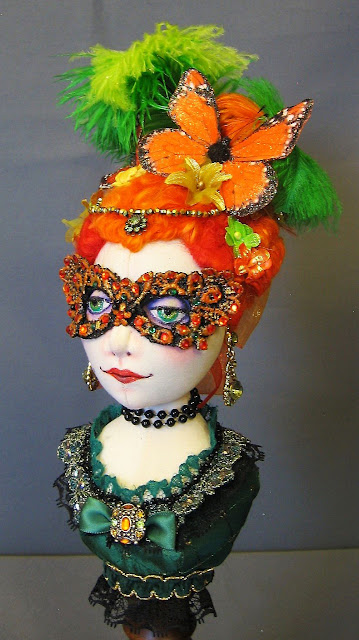 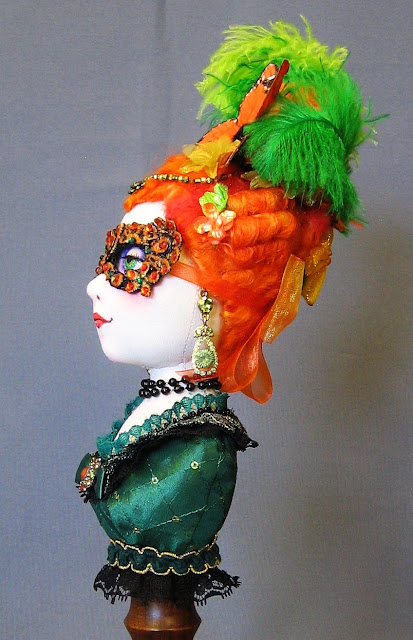 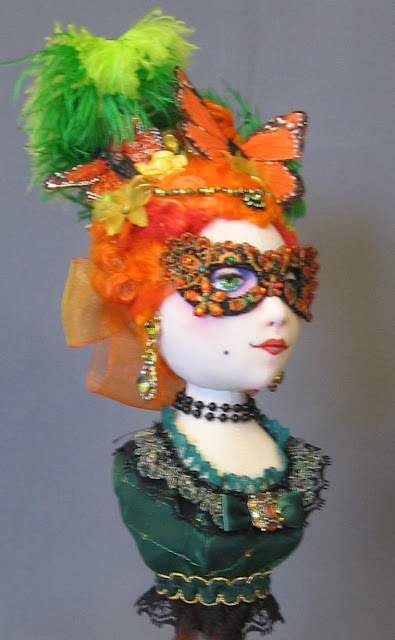 Hi All,
Well, this doll took me 1-1/2 years to finish! (on and off) I stopped on it so many times (mostly because of work schedules) that when I started back on it 2 months ago, I swore I would finish it this time. 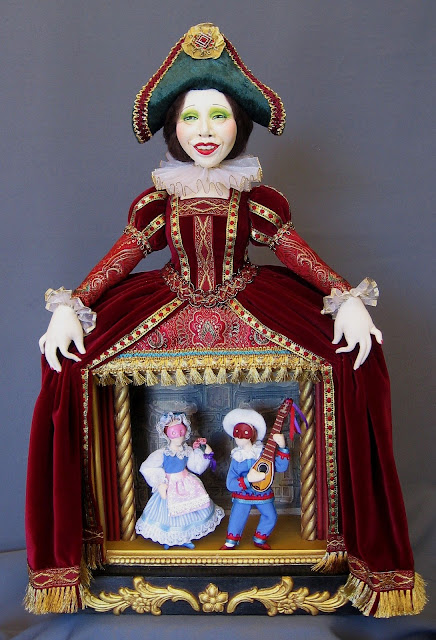 I am proud of the work I did on her. I haven't done a big "show piece" in such a long time. Mostly, it's because a doll like this takes so much time, that it becomes cost prohibitive and usually doesn't sell..
(I apologize for the photos -- all the white is so hard to photograph without light bouncing off of it!) 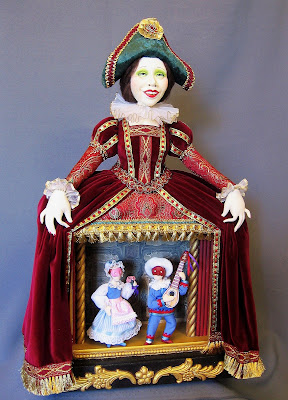 Anyway, here's the details about the Toy Theater Doll:

The face is a mask, sculpted of paper-clay ("Das") and glued to a blank cloth head. The features are painted on with acrylic paint. The body, arms, & hands are cloth. The toy theater is made out of wood. She stands 21 inches high. 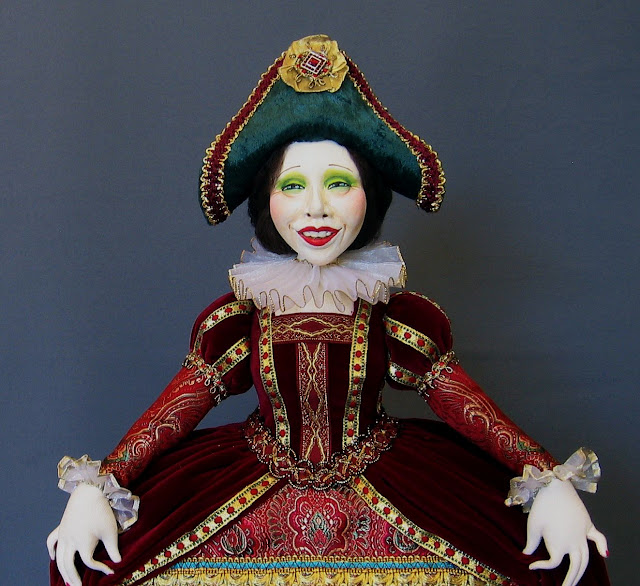 The two figures- "actors" in the theater are all cloth. The man's mandolin is paper mache. Both masks are of paper clay. 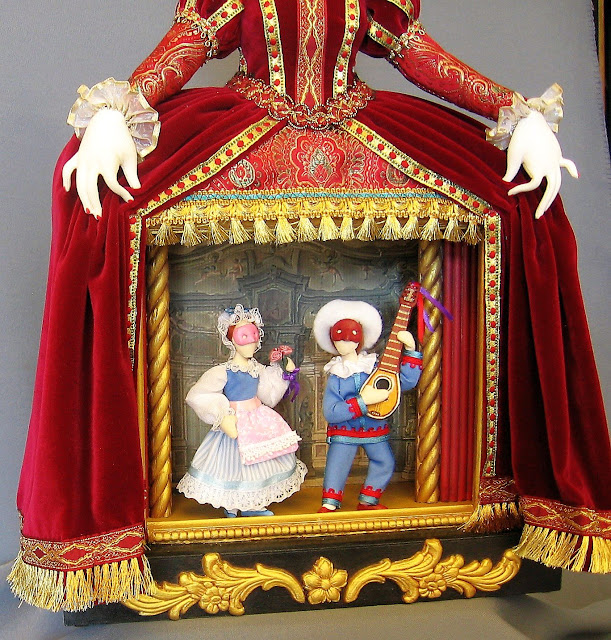 The dolls' costume is made of rich red velvet, trimmed with gold braid & fringe, with red/green satin jacquard sleeves. She holds open her velvet skirt, which become the "theater curtains" to reveal the toy theater under her. 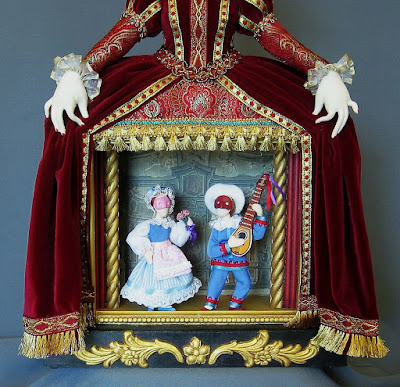 Her hat is made of green crushed velvet, trimmed in more braid with a red jeweled accent. The collar and cuff "ruffs" are made of white ribbon. Her hair is Tibetan lamb. 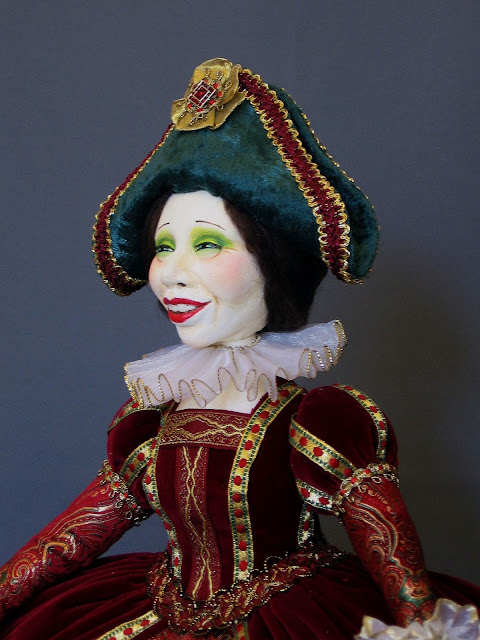 Here are some work-in-progress photos:
First, I started with the theater. I used a wooden box (bought at Michael's) glued to a base, which was a wood lid from another box. Wood molding and appliques were added. I painted the whole theater in gold & black. (I added some red & gold "wings" to the theater, also of molding pieces). I found some artwork online and printed it out on card stock for the backdrop. The finished theater measures about 12" x 10". 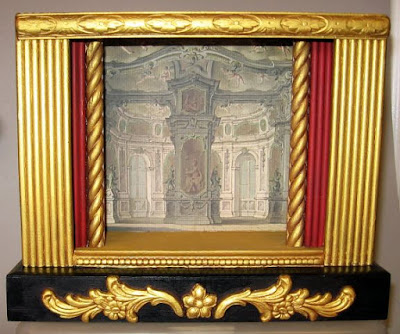 Next, I added the doll torso (ends at the hips) to the top of the theater. I also added cloth padding (in black) to extend from her hips to the edge of the theater, so her skirt would hang more natural. 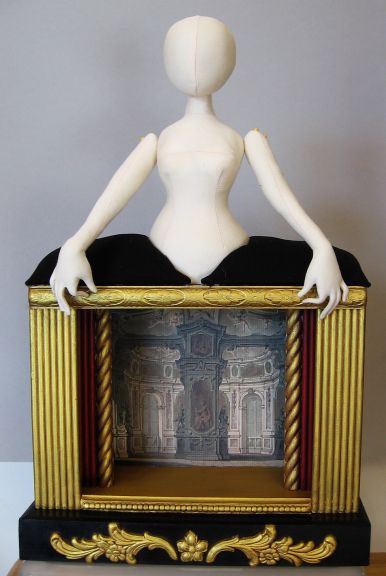 Now, I add the costume. First, the small satin print underskirt- which becomes the top "teaser" curtain to the theater, then the large skirt/curtains. I finish the whole costume, adding lots of trim. 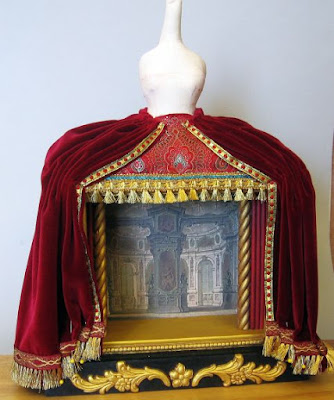 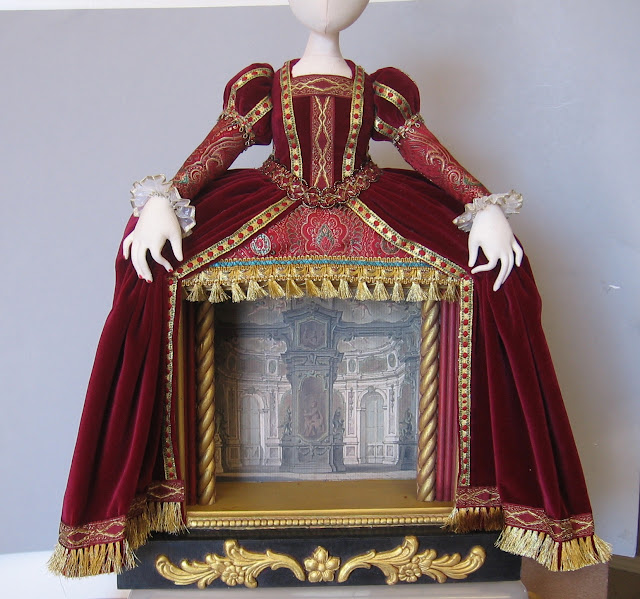 Now for the head. I used a press mold for the face mask. The mold is my own. I sculpted the original out of polymer clay, and made a negative mold of that. I've used this mold on several dolls already.
(she looks a terrible with her bald head!!) You can barely make out the fade line on her jaw. That's were the clay mask ends, and the cloth head begins. I have to do a lot of sanding to get that smooth! I've glued on the Tibetan skin for her wig. (Sorry, no photo of the hat making.) 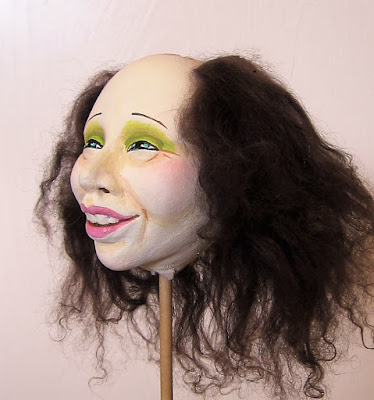 The last thing I did was make the 2 little doll actors for the inside of the theater. First, I was going to sculpt them of polymer or paper clay, but they are so tiny!-- only 5 inches tall (and, I'm not so good at sculpting little things.) This couple took me about 3 weeks to make! (It would have been so much longer if I had sculpted them....) I pick blue & white for their costume, so they would stand out from all the red. They have metal rods that come out their feet. I drilled holes in the stage where they are to stand, and glued them in. 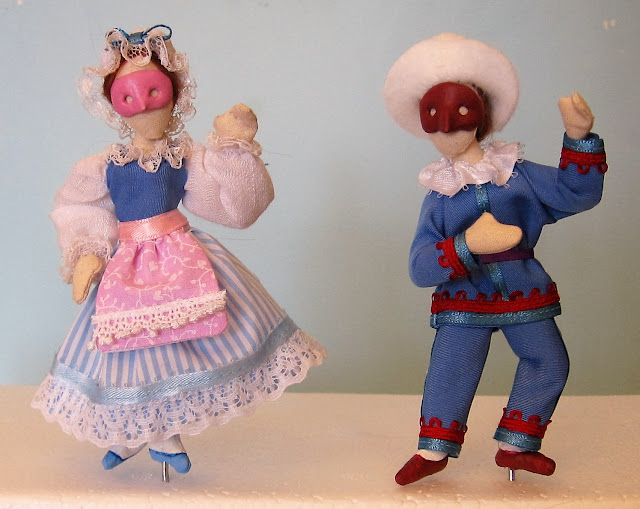 Hope you enjoyed! Have fun. 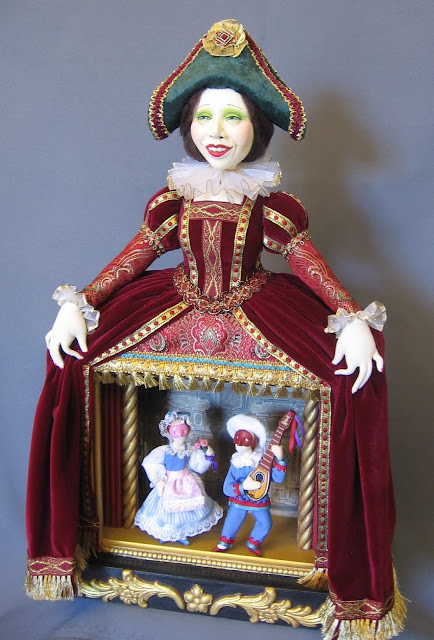