Hi All,
Well, it's taken me a very long time, but I finally got my "La Femme" pattern converted to a digital download E-Pattern! 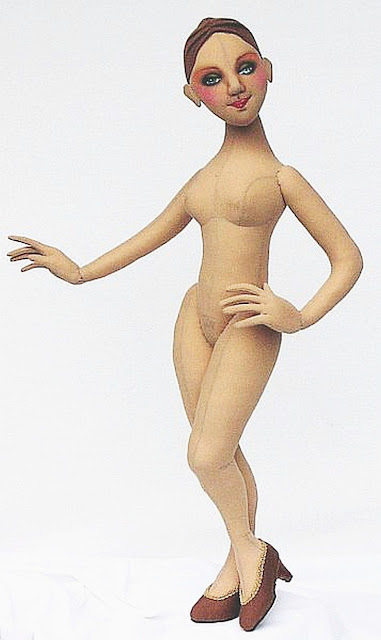 I've been (slowly) converting all my patterns to PDF so I could sell them as e-patterns. All of my new patterns I'm designing are now in PDF form. Converting the latest patterns were pretty easy, but about 4 or 5 of my old ones were lost on my computer, and all I have are the original paper copies.

You see, about 10 years ago, my computer crashed. This was the first time that had ever happened to me. I didn't understand the warning signs. Back then, I wasn't very computer-literate. I wasn't the computer-savvy-techno-geek I am today! (No, not really)

I remember taking my computer in to Best Buys and asking the kid behind the counter to please "fix it". I was informed that, not only couldn't it be fixed, but everything on my computer was gone.

--- Gone?? I stood in a daze, staring into space, trying to think of all the files I had on my computer. The patterns, the photos, the notes -- all gone. (This was before I had even heard of "back up"). Boy, did I learn an expensive lesson. 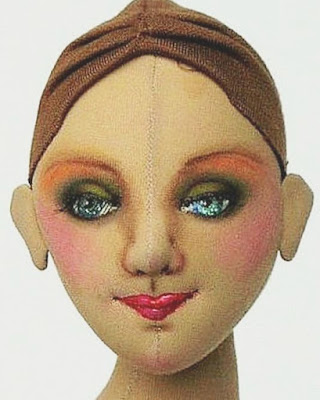 Anyway, at least I had all my original patterns on paper. (I was mailing patterns in paper form, so this wasn't a problem.) But, to convert them into a PDF meant I had to completely re-type the entire pattern, download all the original illustrations, and put it all back together again. (It really only took me about two solid weeks of typing, scanning, copy & pasting.)

But  the task just seemed so daunting, the idea of all that work stopped me from even starting.

Well, nothing motivates me like money (or lack of). I've been out of work for the past few months, expecting to return to my summer job in Santa Fe. But, that fell through, so I needed to get busy doing something!

Re-doing the pattern gave me the chance to fix a few minor corrections, and do a couple of things differently -- after all, I've learned a lot of doll making techniques since I originally wrote that back in 2004 (OMG! that was 13 years ago!!)

Plus, I finally got to change the title to "La Femme" (instead of the original "Le Femme"--it means "The Woman" in French)

As many, many people have told me over the past 13 years, in the French language, "Le" is masculine, and "La" is feminine. (I swear I typed it into a translator program, and it read "Le Femme"!) And, I couldn't just change the title, as the name was written in the instructions about 30 times, and it was on ever pattern piece.)

"La Femme" was my first doll pattern I designed. (The "Gypsy Wagon" was my first pattern, ever.) I created her out of simple frustration -- I couldn't find a basic female doll pattern that had the head, body, feet, and breasts that I was looking for. I wanted something a bit more sophisticated than what I was able to find at the time. So, that's how "La Femme" was born.

If you are looking for a new female body pattern, and you have intermediate-to-advance doll making skills (she not for beginners), please check out the pattern on  my website here. I've also created three costume patterns that fit her. (Sorry, the costume patterns are still in paper form, --but I promise I will convert them next!!)

DAY OF THE DEAD BUST

Hi All,
I made a new Day of the Dead bust (never too early to start the season!) I'm really enjoying doing these bust dolls. And, my customers like them. I think that's because they are small (only 6" tall), and doll collectors are always telling me they have no room for large dolls. (She'd be shorter if I used a smaller candlestick.)

I don't have a name for her. I titled her "Day of the Dead" -- (I know, not very original). She's on her way to Denver now, at the Rocky Mountain Sew expo. 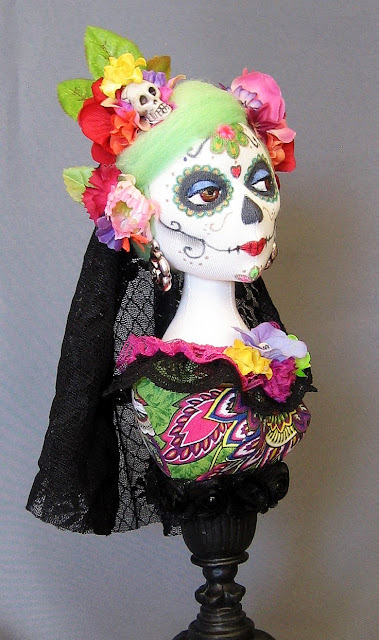 This is the first "Day of the Dead/Catrina" doll I've done where I did a painted a "sugar skull" design over a human face, --instead of a skeleton head. I think this face has a lot more character than a basic skull. 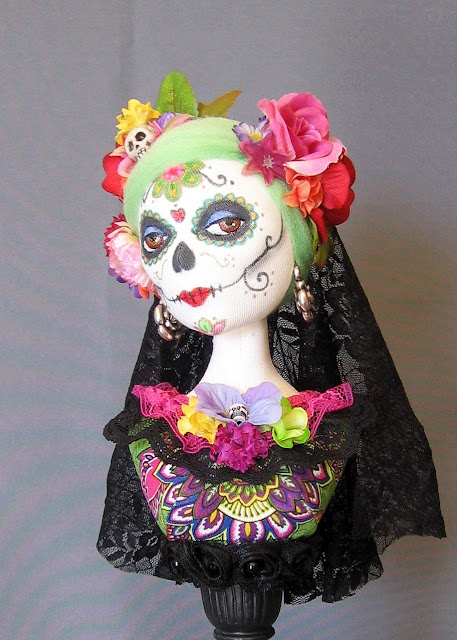 I was really inspired by the "Marie" bust class I took with Sharon Mitchell. Since then, I've made my own bust pattern, by modifying my basic candlestick pattern. I've been tinkering with it, and I think it's about done.

All the face coloring is done with gel pens and "Tombow" brush-tipped markers. Because I use deer suede fabric for my faces, most markers bleed on the knit fabric. Tombow markers are fabric pens, and they don't bleed (much).

I've been experimenting with "straight wool" for hair. I don't make wigs that often, but when I do, I  use mohair. But, mohair is getting harder and harder to find. So, I thought I'd better branch out to see what else there is. I like how easy it is to needle felt it into the head. And, you don't have to sew it into a "weft" first. (You can, if you want.) It comes in one long piece (about 3" to 6" wide, depending on how thin you want). I sort-of wrap and sculpt it over the head, (like a turban) and glue/needle felt it down. --But, it is straight, so no hair designs with curly locks (like mohair). I'm finding it in mostly pastel colors, but I'm looking for some brighter/stronger colors. 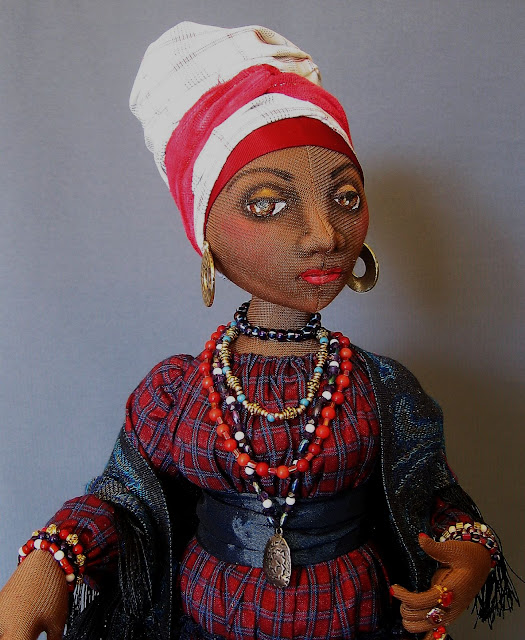 I knew very little about Marie Laveau, but after watching "American Horror Story- the Coven", with the fabulous Angela Basset giving an over-the-top performance of Mistress Laveau, I became curious and started doing some research on her. 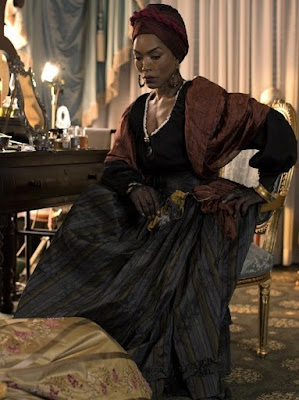 Angela Basset as Marie Laveau in "The Coven"

Technically, Marie wasn't a "witch". And, she wasn't "dark" (well, mostly). But, she was know to cast some evil spells with her voodoo (or, so people thought-- nothing based in fact survives to tell if Marie's voodoo actually worked).

Marie Laveau was born a free woman of color around 1800 in Louisiana. (Her actual birth date is unknown). She was classified as "mulatto", as her parents were of French, African, & Native American origin. Marie was raised catholic, and continued to be a devout catholic all her life, even though she practiced the art of Voodoo. She was described as a "striking woman with sharp features, curly black hair, & black eyes". She also had a flair for the dramatics.  She was known to have a pet snake named "Zombie", after an African god.

She was a hairdresser by trade, catering to the rich white woman of New Orleans. She officially became the "Voodoo Queen of New Orleans" around 1820.

These are portraits of Marie Laveau found on Google. I do not know if these were painted while she was alive, or after her death. As you can see, there are many discrepancies over how she looked, even her skin color!: 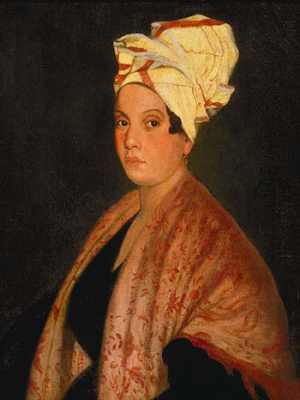 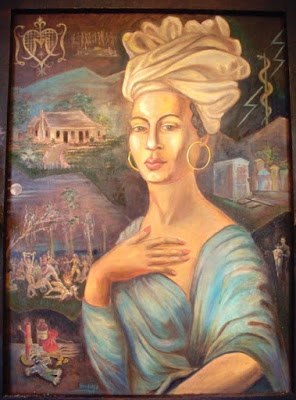 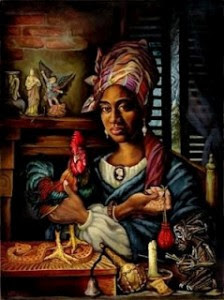 I made sure to include the 2 things the paintings had in common - the turban & the shawl. I fashioned my Marie doll mostly from the last portrait (with the rooster). I liked that she is holding a red "potion pouch", so I included that: 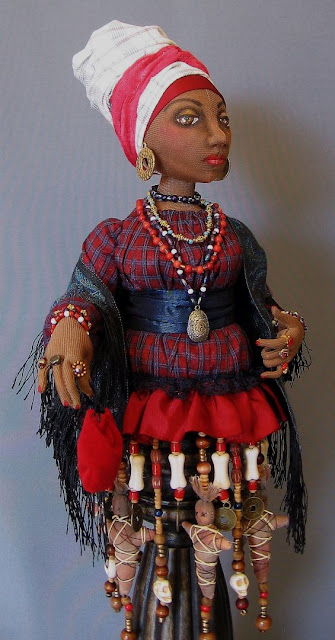 Here's a close up of her jewelry: 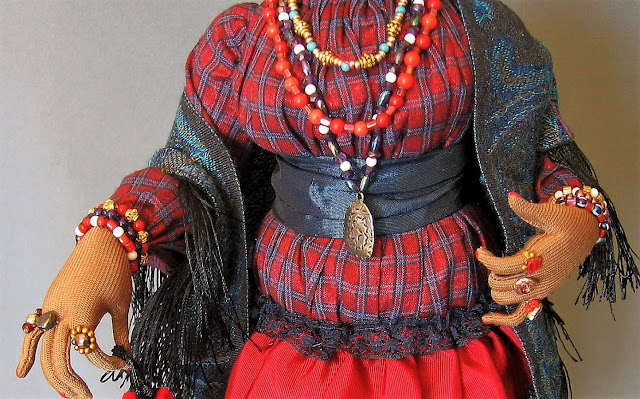 I wanted to add as many voodoo-related items as I could. Here are little voodoo dolls I made, strung together with beads, skulls & coins to make the hanging beaded fringe: 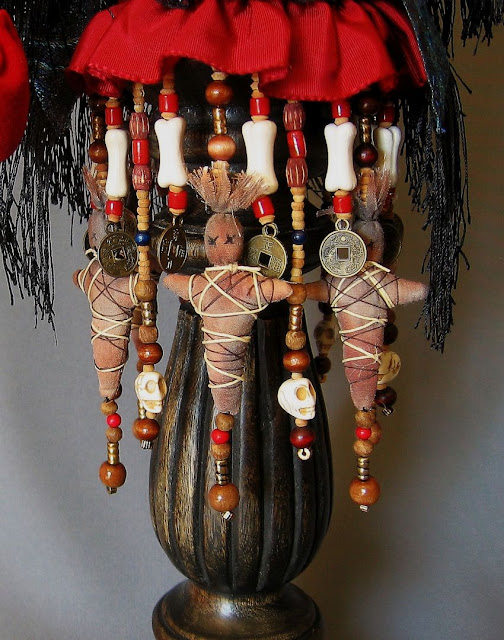 Marie held her title of "Voodoo Queen" until she retired in 1850. Her daughter, also named Marie Laveau (Marie-II), took over the title until her death in 1890. It's reported she looked very much like her mother- same eyes & features. So much so, that many people didn't realize it was her daughter, and assumed Marie-I was still practicing voodoo.

Marie-I died in 1880. Here tomb is in the New Orleans cemetery, where it is richly decorated yearly by her many fans.

Beyond the basic facts, not much is know for certain of Marie Laveau. (Even some of those facts are flimsy, as record-keeping was rather casual in the 1800's for people of color.) Over the years, stories of Marie became legendary. And, like most legends, truth and fiction overlapped. It's also hard to separate which Marie is referred to in these stories, as the two Maries became one woman in the re-telling of her tales.

What is known about Marie Laveau is she was a strong & independent woman of color who earned the respect (and sometimes fear) of an entire city,

This is the only photograph credited to Marie that I could find (or, it might be her daughter, Marie-II) 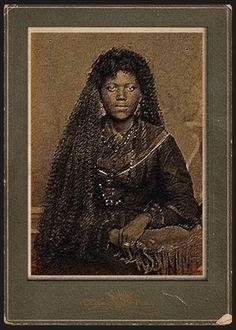 Have fun until next time!
Posted by Arley at 3:01 PM 4 comments:
Newer Posts Older Posts Home
Subscribe to: Posts (Atom)