Hi All,
With getting ready for my "bottle class" (and other stuff), I haven't had time to show you everything from Halloween.

So, first, I took a class in October with Thomas Ashman called "Scary Dolls". It was an "altered doll" class. I had a blast! It was so much fun. We brought to class  a porcelain doll from the thrift store. In class, we ripped off the wig, and stripped it of the clothing. We repainted her with black and white paint. Then, we took the clothing and dunked it in a large bath of black dye. When everything was dry, we embellished the dress to go with our new "Goth Doll" (as Thomas calls them). Then, we added a marabou feather wig.

I went for more of a "Day of the Dead" look with my doll. Plus, I added some red coloring to the mix. My doll came dressed in white polyester princess dress, so the darkest it would dye was a light gray color. So, I added lots of black trim to it.

(Sorry, I forgot to take a picture of the doll before I started.) 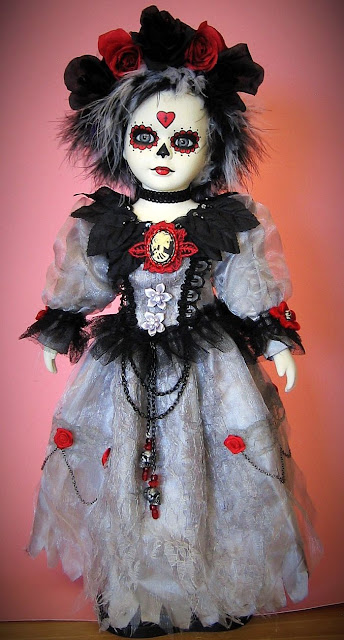 Most people in the class popped the eyeballs out of the head, and left her eye-less. I did that at first, and then put the eyeballs back in. I thought it looked too creepy without the eyes. 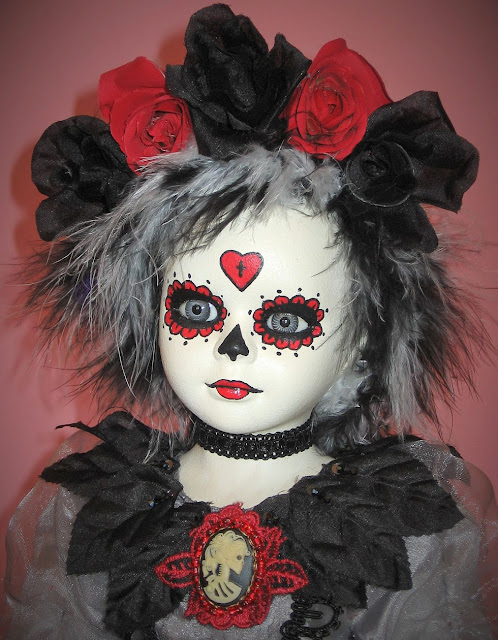 Those are black fabric leaves I stitched around her collar. 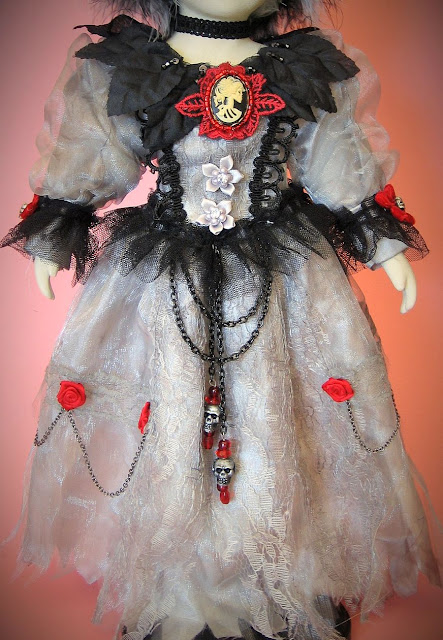 I also wanted to show you all some more of what I made for my yard this year:
I call this "Creature with a Friend". 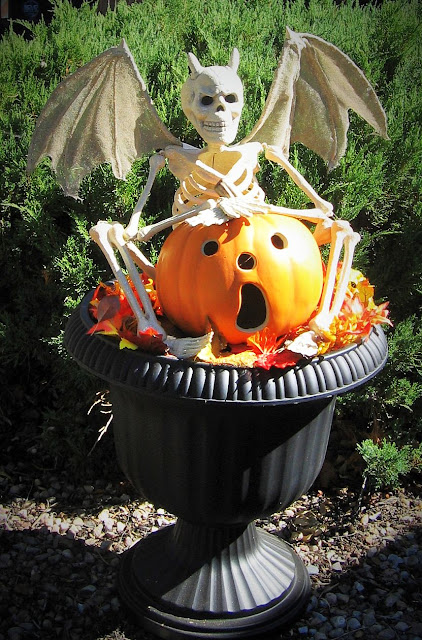 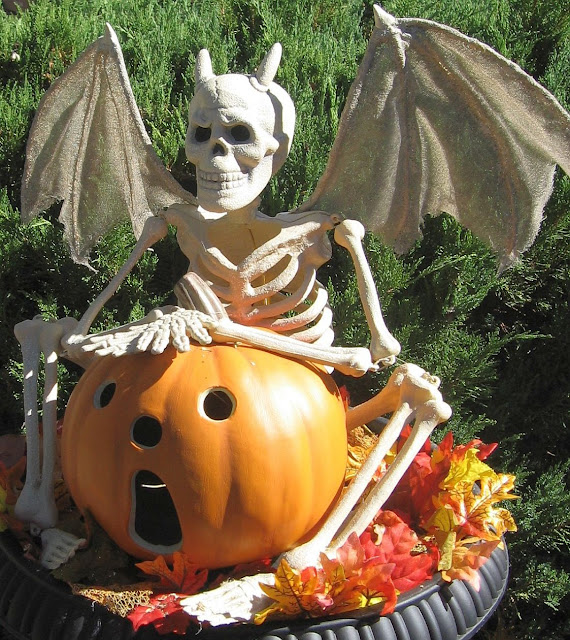 Very quick and easy to make. I got a skeleton whose joints were linked together with big jump rings. That allowed it to pose with the knees and elbows out. The pumpkin came from Walmart, already carved!-- I just love the expression! (Better than I could do).

I added horns to the skelly by cutting up some plastic toy vegetables from the dollar store (I think they were bananas or red chili peppers) and some 2-part apoxie clay. I also altered the eyes with the same clay. And, I added texture to the whole thing with some spray texture paint.

The wings were super easy. 3 wire hangers are the armature base. All three wires are tied together along the main edge, while the ends were bent apart to form the "fingers" of the wings. (Wings are made as one piece.) I wrapped the whole armature in masking tape. The fabric is a heavy gauze glued to the frame. Then, just added some apoxie horns at the top of each wing, and sprayed with more texture spray and paint. 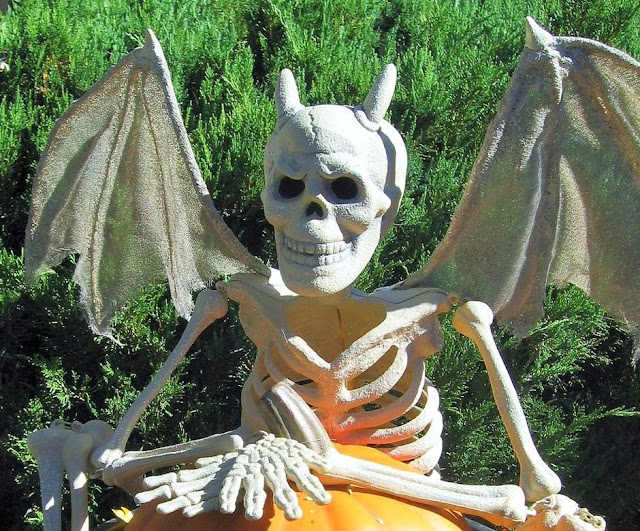 I glued the skelly and the pumpkin to a cardboard base (covered with fall leaves from the Dollar Store) and stuck it on a plastic urn found at the garden store.

My other big piece was a "Wall of Skulls". I have these two pillars in front of my house, holding up my porch. I wanted to decorate them, and thought about something like what you see in a crypt or underground catacomb. (My plan was to do both pillars, but only got one done.)

I started with a piece of cardboard that wrapped around the front and sides of the pillar.
Then, I got some styrofoam skulls that I cut in half and glued to the cardboard. I ran out of money, and didn't have enough skulls, so I added some plastic bones and the backside of some of the skulls. (Some of them came painted, some were blank). Since I was planning on spray painting the whole thing when it was done, I coated the styrofoam skulls with glue and paint, . (Spray paint and Styrofoam don't mix!) 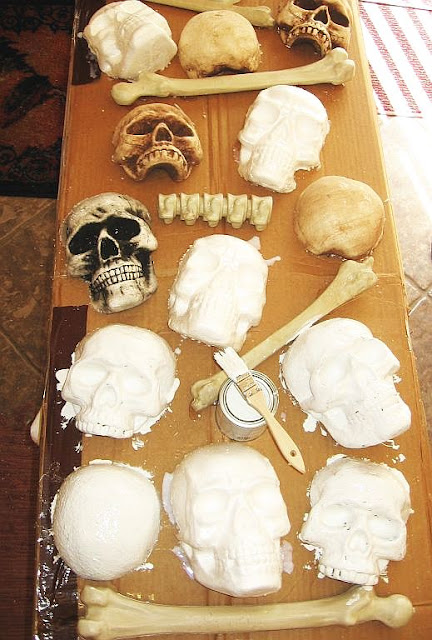 Next, I sprayed some expanding foam insulation between all the objects. I also coated everything with more latex paint I had left over from the house. 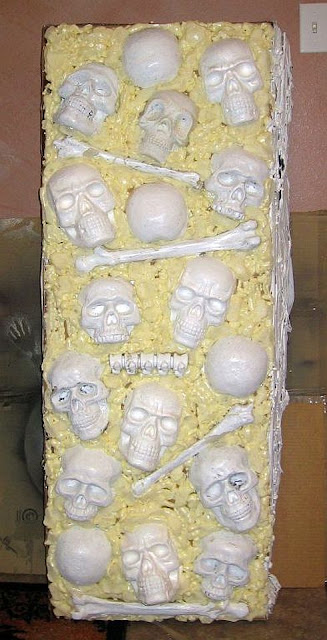 I chipped away at some of the foam, coated everything with more latex paint, and spray painted everything. I went back after spraying to do some detail work.

At the last minute, I glued some moss to it to make it creepy (and, to hide some of the skull backs - which looked more like odd-shaped balls than backs of skulls.) 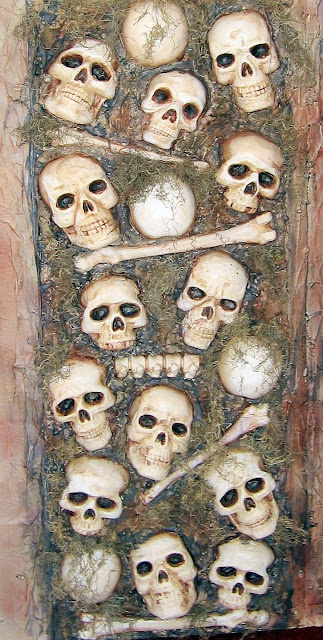 Here it is, attached to my pillar with some velcro straps, glued to the back of the cardboard.

Here's my porch, (almost done decorating) with my pumpkin scarecrow (made with PVC pipe, a Christmas tree stand, tree branches, fabric, and a giant plastic pumpkin I got at Target) Sorry, I cut off the side of the pillar when I took the photo! My front door is off to the right, closest to the "Pillar of Death"!!! 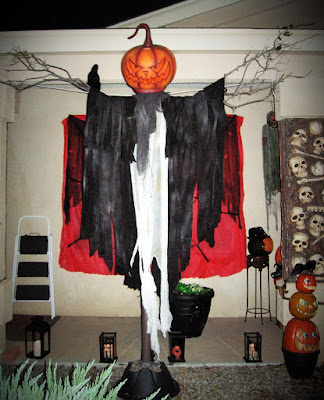