Hi All,
Sorry I've been away for so long. I started a new job at Santa Fe Opera in the Costume department, and it's taken up all my time.

Anyway, I took some time off this week to take a doll class with Ankie Daanen (www.ankie-doll-art.com), a Dutch artist who now lives in Spain. She comes to America every other year or so, and teaches doll classes. So, getting a chance to take her class was a real treat for me. It was an exhausting 4 day-class, making her doll, "Black Beauty". It's a doll entirely sculpted out of paper clay.

Ankie's style is very unique. Her dolls are part girl, part whimsy. (Ankie is rather tall and slender, and so are her dolls!)

Here's a photo of the work I completed the first day: 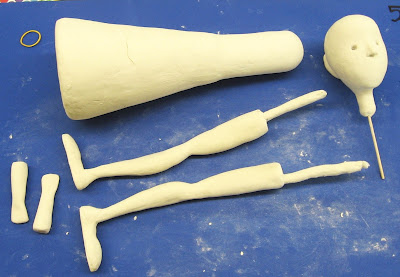 We were given a styrofoam cone & small cylinder, which became the body, and a stryofoam egg, which became the head. We were also given a wire armature for the legs, and little clay "stumps" for the hands. We spent the first day putting a layer of paper clay over everything, plus building a bit of the forehead and nose, and some of the leg & foot. (The clay is actually white in color, but in my photo it came out yellow!)

Sculpting with paper clay is a slow process. You have to build it up in layers, letting each layer dry before adding more clay. We had ovens going to help dry out the clay as we worked.


Here's what I accomplished the second day: 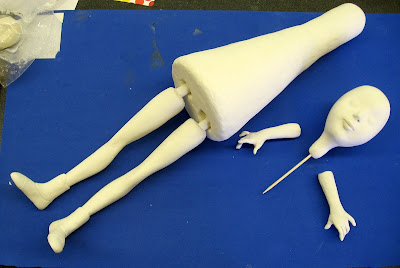 Here I built up the entire leg and sculpted ankle boots. We added the lips, cheeks, and eyeballs on the head, and sculpted fingers to the "stump" hands. (Oh, those fingers! So hard to sculpt!) Working with paper clay, you have to be careful to sand each layer as smooth as possible before adding the next layer. So, much of the end of the 2nd day was spent sanding. 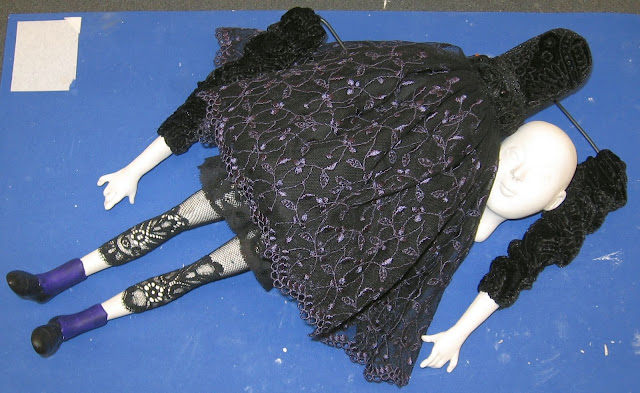 Okay, now it's starting to look like a doll! Ankie gave us costume kits she had made for us. Here, I've gathered, stitched (and glued) all the pieces to the body & arms. Plus, we painted the shoes. Lace was glued to the legs, and several layers of skirts were stitched on. We had some stretch velvet tubes for the top and sleeves.

And, the fourth day, the finished doll: 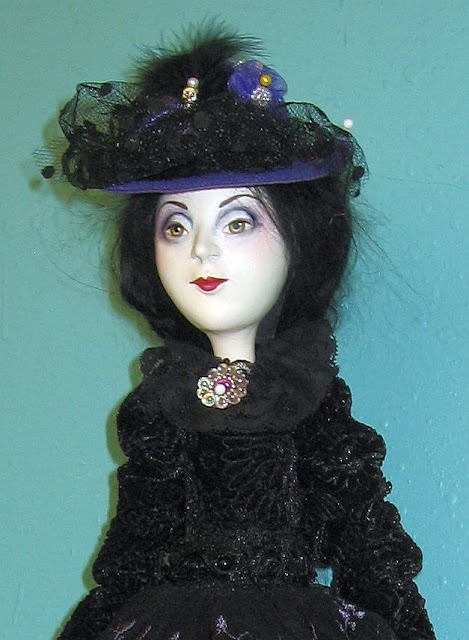 Ankie taught us how to use water-colors to paint the face, which was a new experience for me! We didn't paint the "skin" of the doll -- that's the natural color of the paper clay! Powders were also added to the face for more subtle shading. Tibetan lamb skin is used for the wig.

Before the wigs could be glued on, Ankie painted a layer of matte lacquer over the faces to save the color. (She was nice enough to do that for us, while we were furiously stitching the costumes pieces together!) 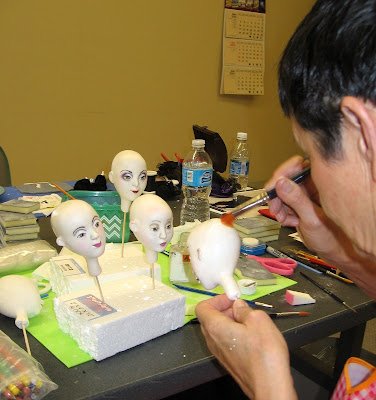 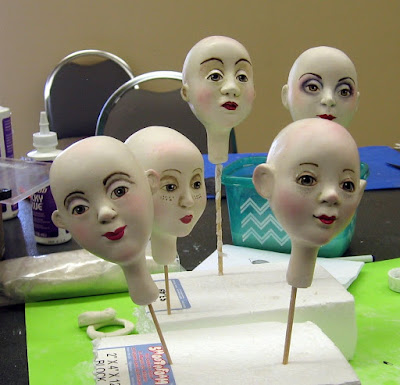 Notice how my head  (back row) has more color and make-up than the others??? I couldn't help it. Once I started adding color, I couldn't stop until she was a full blown Glamour-Diva!


Here are some of the finished dolls in the class: 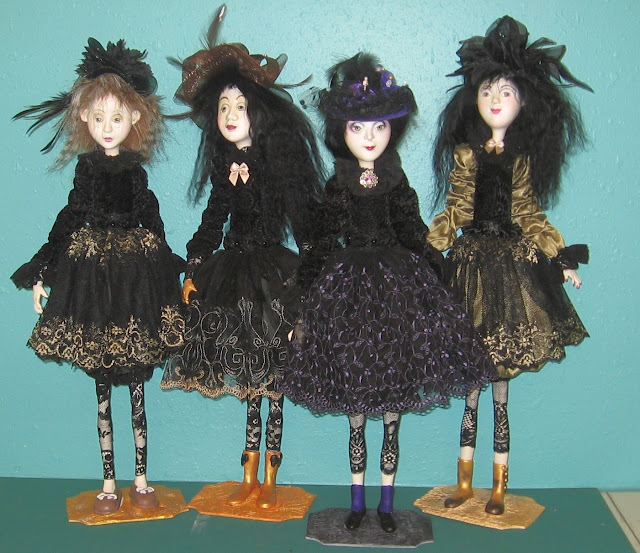 My doll sort of looks like a Victorian hooker, next to all the sweet, cute dolls in the class.