"THE SEVENTH SON" - ANOTHER WITCH MOVIE

Hi All,
As you know, I like to occasionally take a break from doll making and talk about witch movies I've seen.
I was at the movie rental place last weekend (yes, I still rent DVDs - I haven't learn how to download them yet), and saw this movie I missed in the theaters-- "THE SEVENTH SON". (It must have had a short run.) 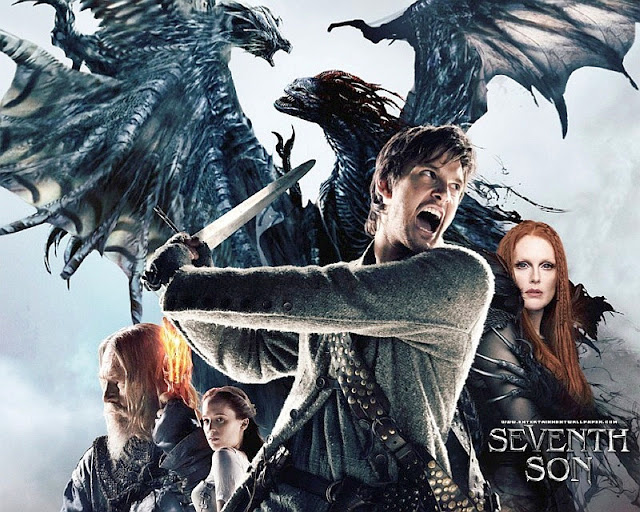 It's your basic "Sword & Sorcery" movie (like the fantasy movies from the '80s) --- which, I LOVE. It takes place in olden times, where witches, dragons, and other mystical creatures roamed the earth, inflicting death and destruction on humans. It's based on the book, The Last Apprentice.

It stars Jeff Bridges as "Master Gregory", an old, cancerous knight who fights these evil creatures. 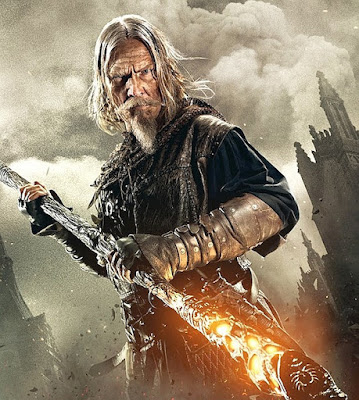 He's the original "seventh-son-of-a-seventh son" (which, for whatever reason, gives one the gift of bravery above mere mortals). He is refereed to as a "spook", which means "witch hunter".

And, here's the young, handsome hero, "Tom" (Ben Barns, who was "Prince Caspian" in the "Chronicles of Narnia"). 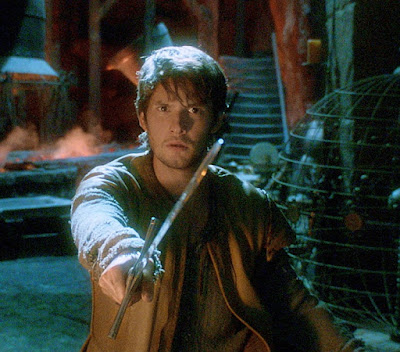 He is Gregory's apprentice. He is also the seventh-son-of-a-seventh-son. But, he has another gift - his mother is a witch! (the good kind). This makes him a half-witch AND a seventh son! (multiple powers!) 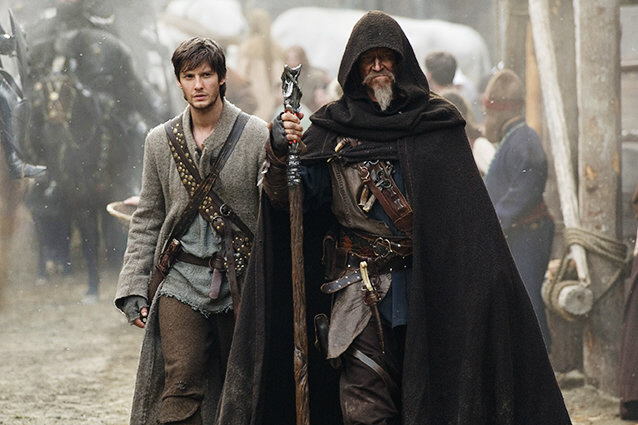 And, it also stars Julianne Moore, who is the devilishly evil witch, "Mother Malkin". 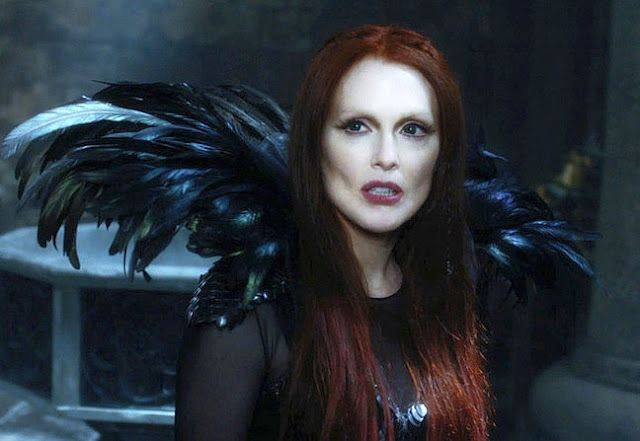 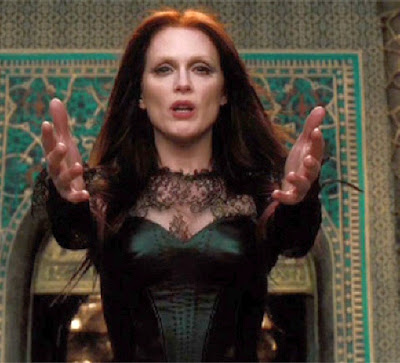 AND -- she morphs into a DRAGON! (When she's in human form, she still has her scorpion-like dragon tail.) 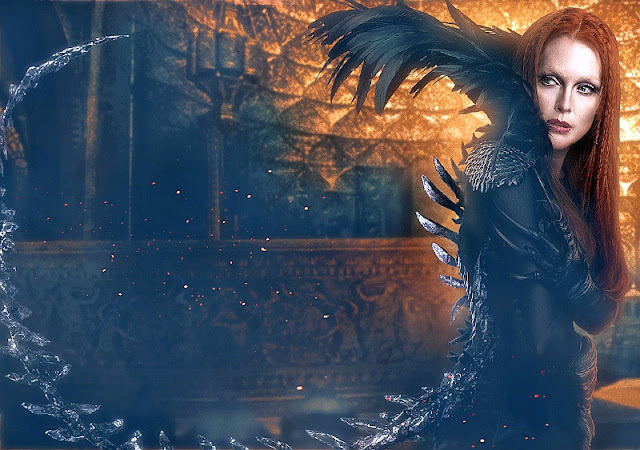 Well, turns out that long ago, (spoiler alert) Master Gregory and Mother Malkin were lovers! But, she turned evil, and he left her & married a mortal woman. Now, Mother Malkin is back, taking her revenge out on him and the rest of the humans! (Nothing like a lover scorned.....) 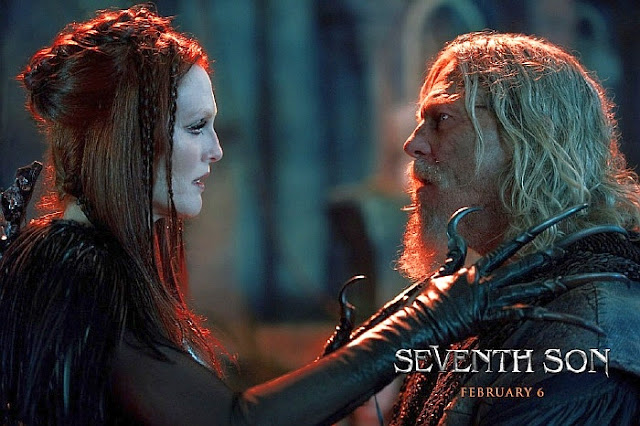 And, here is the pretty young heroin, "Alice". She's a half-witch as well. (Her mother is an evil witch, and sister to Mother Malkin.) 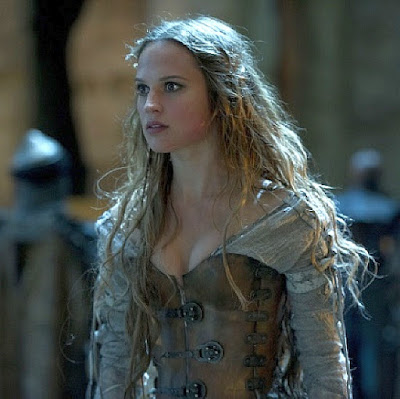 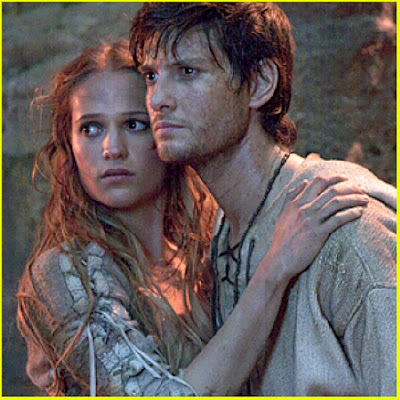 So, witchy Julianne Moore gathers her evil witch friends, along with other assorted bad-ass characters (who all morph into some form of evil creature --- very cool), to wreck havoc on the village Jeff Bridges is protecting. 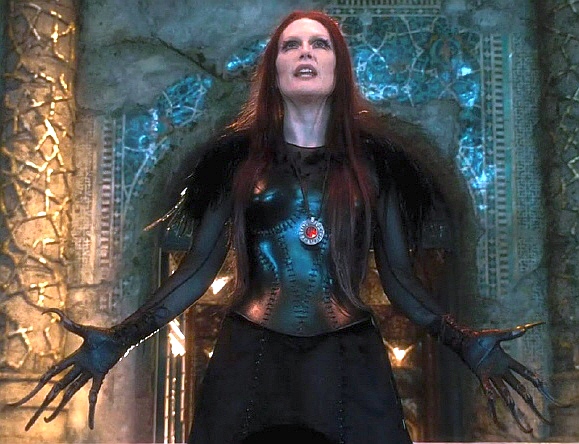 At the same time, Jeff Bridges is teaching young Tom the mystic ways of being a "spook" - so Tom can eventually take over the job for him (Jeff isn't getting any younger, ya' know?)

Well, evil is destroyed in the end, and love triumphs over all. -- But, it is a very cool fight to the finish, with lots of CGI effects!

Now, I'm not saying this is a great movie. (It might not even be a GOOD movie.) The plot is predicable, and the characters have little dimension. --But, it has great designs and art direction. And, for 3 bucks, it was a fun escape on a Sunday afternoon.
-Plus, it gave me more ideas for designing "evil-but-beautiful" witches!

Hi All,
I'm working on a new pattern, and have body parts everywhere! I'm working on a new "opera singer" pattern for a class I'm giving in England at the end of the year. It will be based on my "She Sang, It's Over" opera doll I did for the Hoffman Challenge 2 years ago. 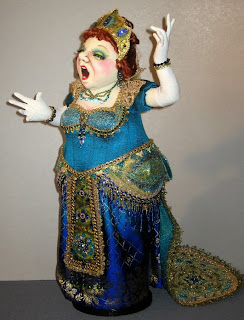 But, this time I want to add legs to her, (the original was a stump doll), and make her breasts larger (I was never happy with the size of the bosom on the original)

Here are some of the body prototypes: 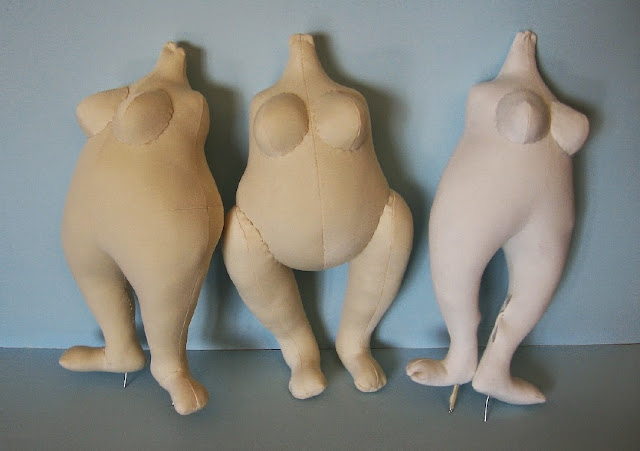 Trying to get the proportions right. And, deciding if to make the legs separate, or "all-in-one" with the torso.
After making several bodies, I've decided to go with the "all-in-one" version. -Yes, the feet are "turned out" like a ballet dancer, but it's much easier to sew, stuff, and put armature wire in. (Besides, you won't see the feet after the skirt is on.)

I have decided if I want bigger boobs, they would have to be made separate, and sewn on by hand. (They're too large to pattern into the body.)

I picked the prototype on the far left.

Then, I had to pattern the arms and head to fit the body proportions.
So, this is what I have so far: (I want to make her a little taller, not quite so "squat" looking) 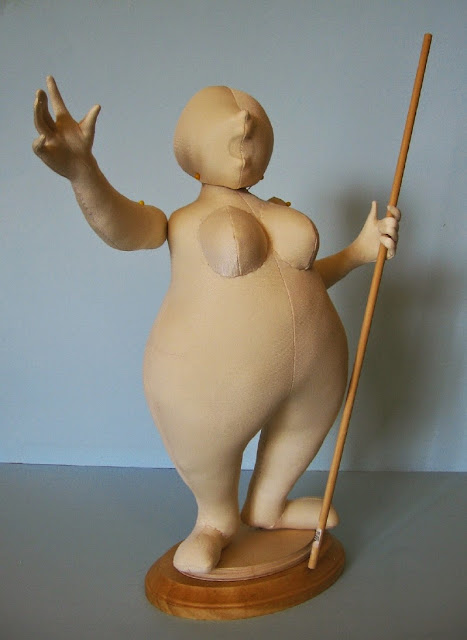 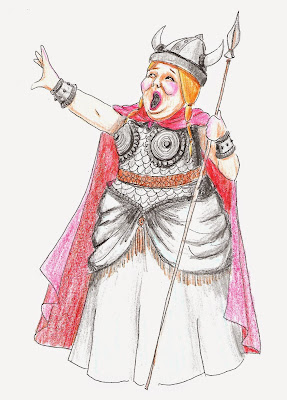 This is the opera costume that everyone thinks of when you say "fat opera singer". (This character is "Brunhilde" from the opera "The Valkerie" (Die Walkure) from the 4-part "Der Ring des Nebelungen" by Richard Wagner.)