Hi All,
Well, if you've been reading, you will know I'm currently OBSESSED with the movie "MALEFICENT". Recently, I've done some research on the costumes she wears.

Maleficent has a total of 9 costume changes in the movie. There was a core group of people involved in designing her look, called "Team Maleficent". Angelina (who also produced the film) hand picked the artist to collaborate on how she will look. There was Rob Goodwine, who's responsibilities included shoes & accessories, Manuel Albarren who built Maleficent's collars and jewelry, and Justin Smith who was responsible for all of Jolie's headgear.

Costume designer Anna B. Sheppard headed the team, overseeing all of her costumes.

And, famous special effects make-up artist Rick Baker designed her prosthetic cheeks, ears, and nose. Plus, a set of sharp molars. And, he designed the horns, made of light-weight resin, which were attached with magnets (so the horns could come off between takes). Baker also designed her contact lens, which were hand-painted in iridescent colors. 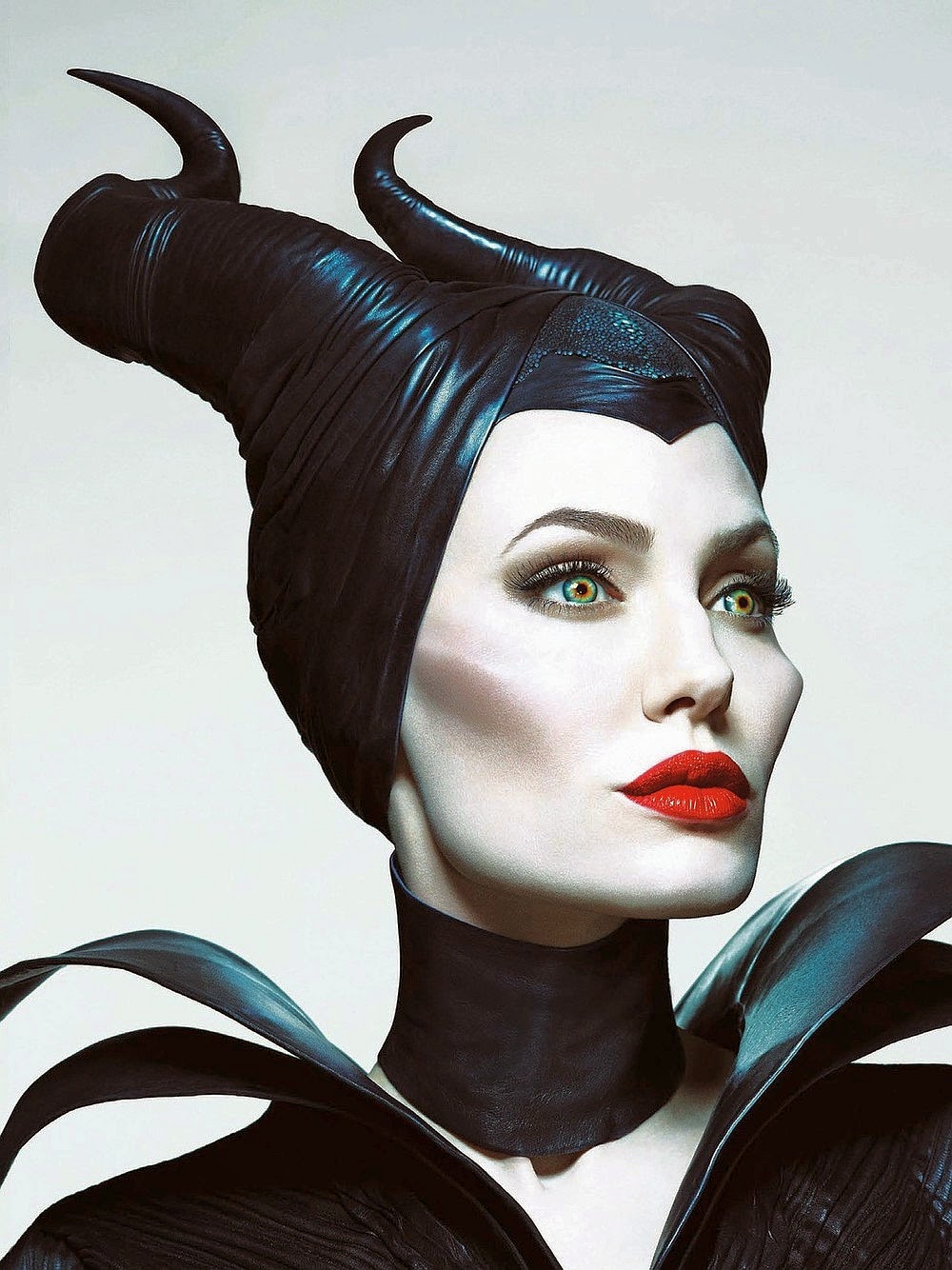 "Team Maleficent" met with Jolie for many days before shooting, discussing designs, looking at samples, and doing fittings.

The first time we see grown-up Maleficent (played by Angelina Jolie) is as a fairy in her forest, (complete with wings). Designer Sheppard used hand-dyed silks in natural shades of brown. 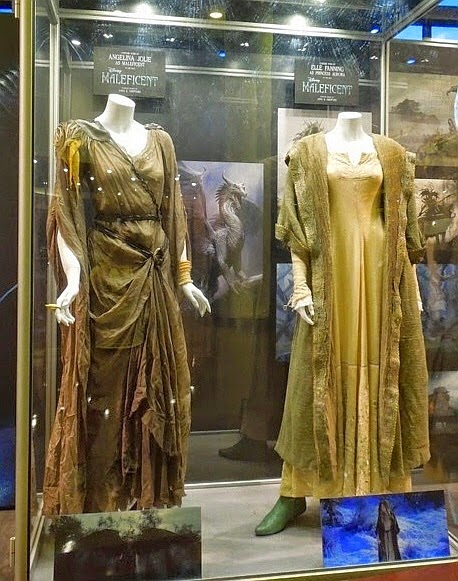 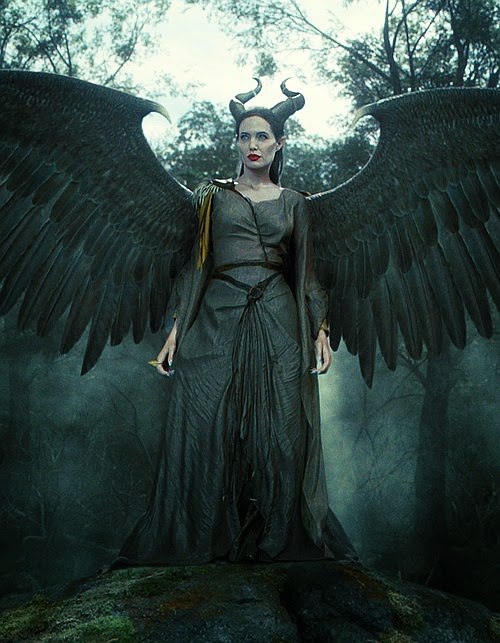 For the famous "Christening" scene, we see Maleficent as the evil fairy, after having her wings (and her heart), torn off by her true love (who is now the king, and Aurora's father). 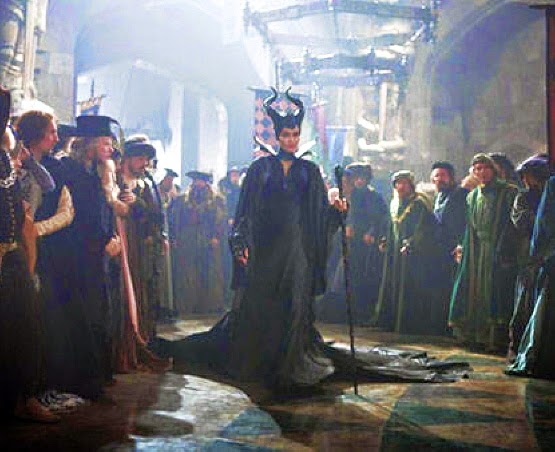 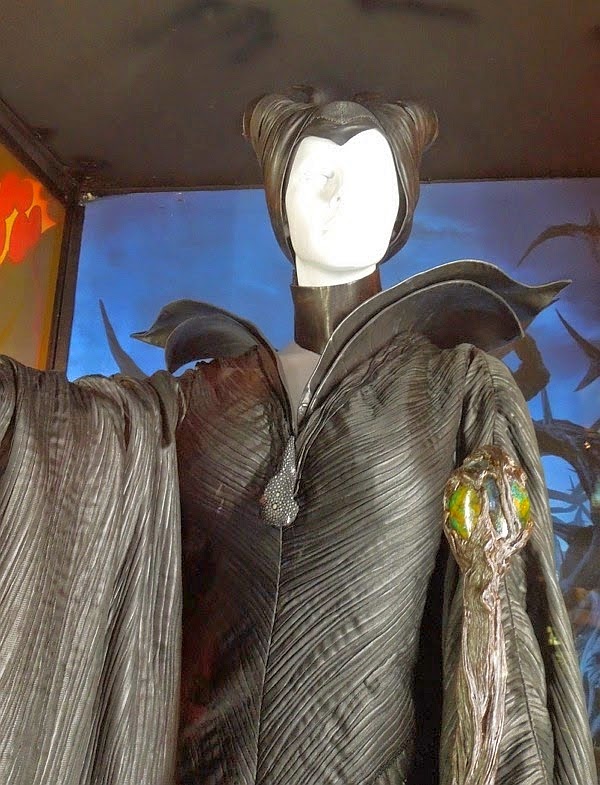 It was this look that resembled the iconic cartoon costume. It was made of hand pleated China silk, with large "bat wing" sleeves.

--Notice the cool STAFF she carries (the stone is the same colors as her eyes!).

She also sports many rings with her costumes. Since the character is burned by metal, all her jewelry was made of wood, stone, or bone. Here's one made of a bird skull: 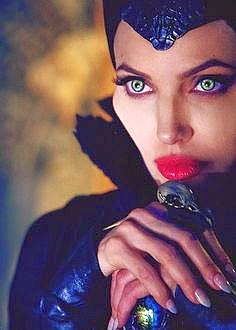 Along with her rings, Maleficent wears several accessories and collars, made of an assortment of materials, including fur, feathers, shells, animal bones, and teeth. 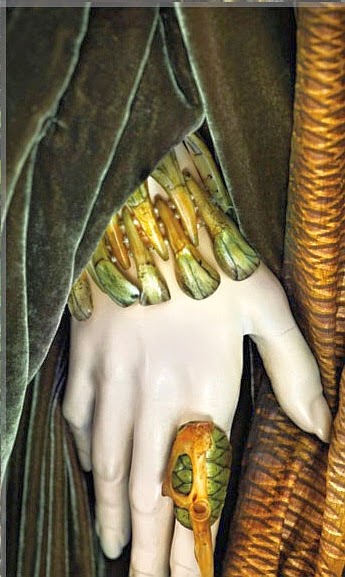 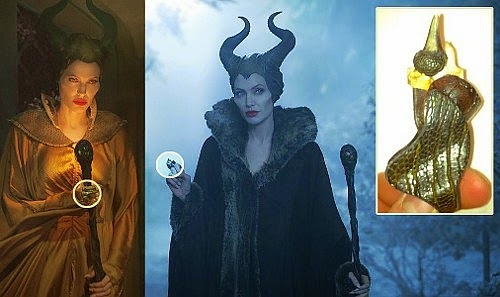 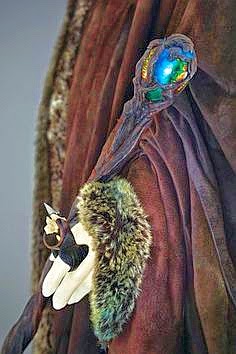 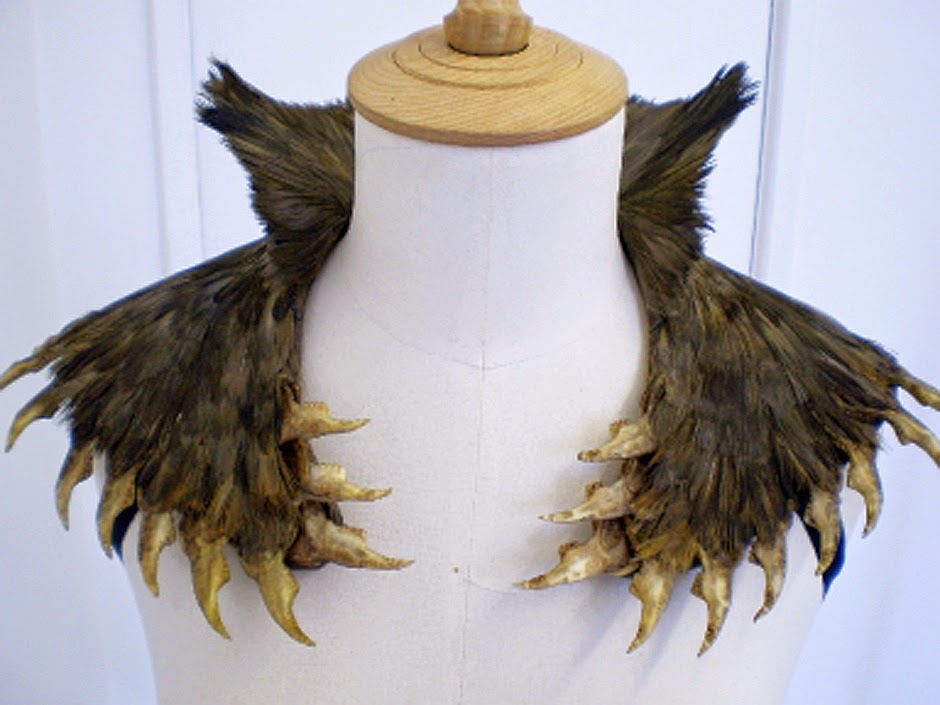 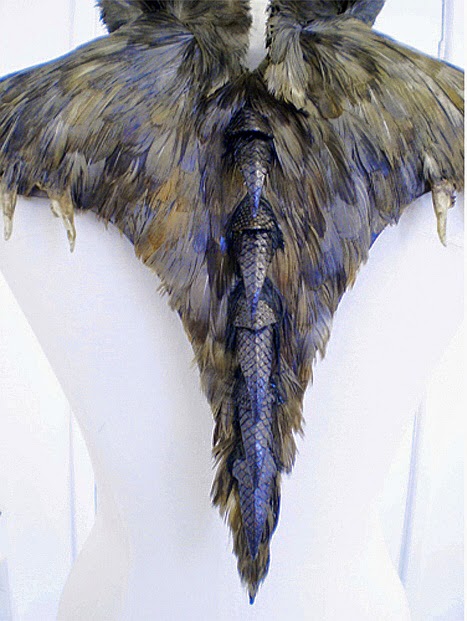 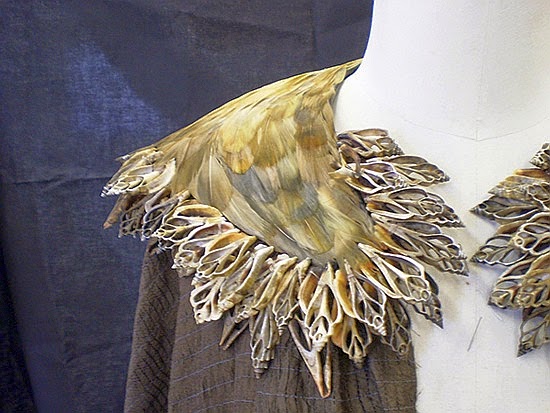 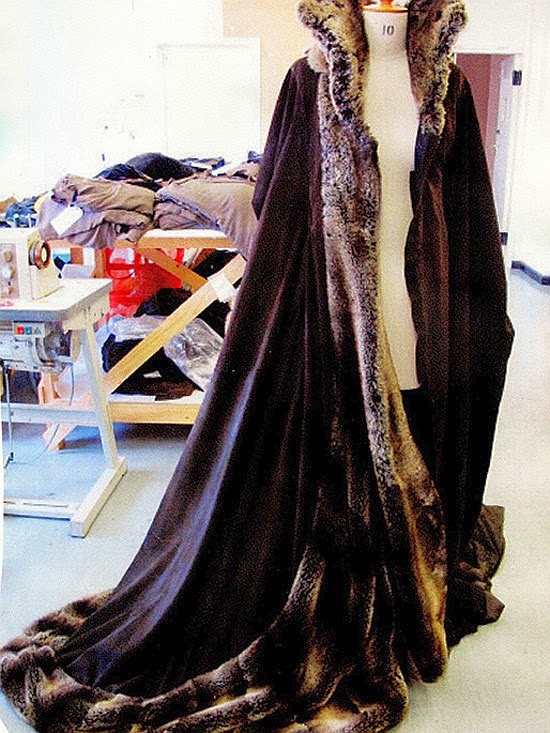 But, for me, the most interesting part of Maleficent's costume were her headdresses. (Later in the movie, we find out they are her "crowns"). She wears 7 different wrapped and pleated headdresses. Again, only using organic materials, they were made from leather, ostrich skin, cobra, python, and sting-ray! 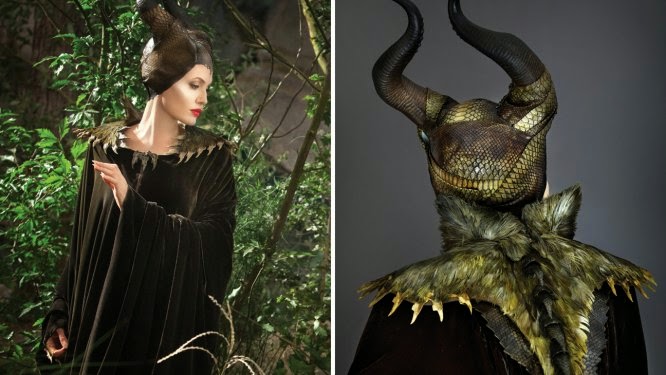 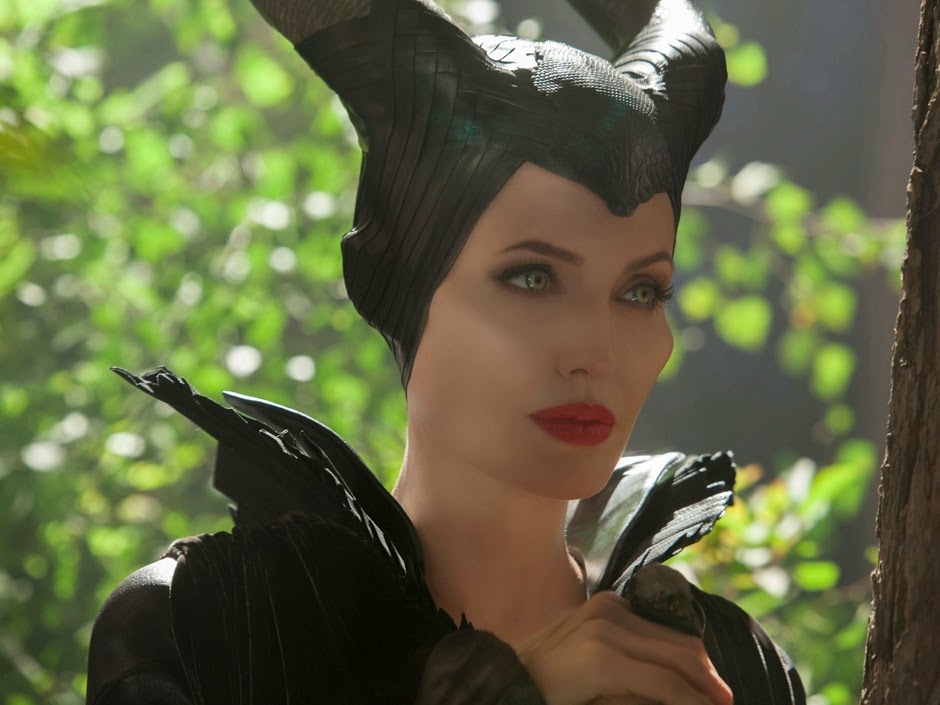 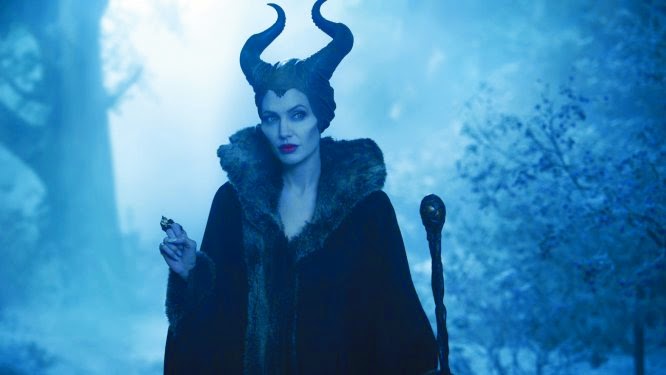 Here's a sample board of some of the materials: 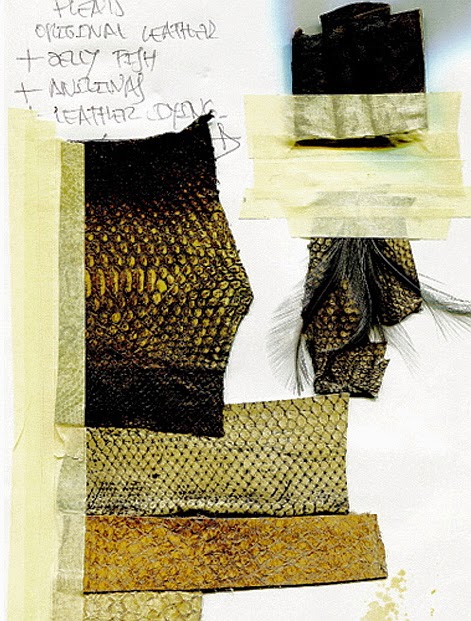 In the final scenes of the climax, we see Maleficent reunited with her wings (saved by the king in a locked cabinet), stripped away from her heavy cloaks and ready to fight! She wears a leather jumpsuit adorned with feathers, and high-heel boots: 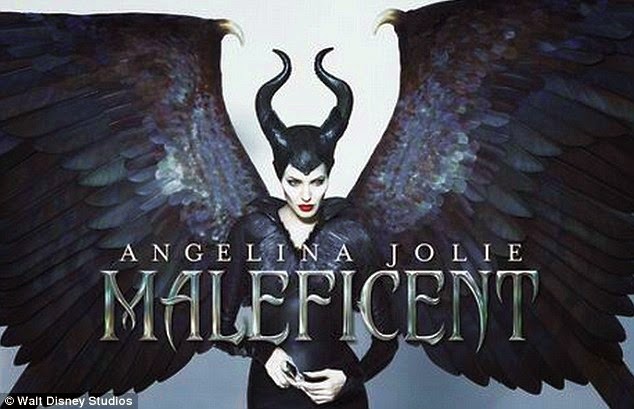 Well, thanks for indulging me.

Some of the accessories she wears are amazing. I like the collar with the feathers and the slices of shell...very cool:)

I just saw the movie and I loved, loved it! Not the regular Sleeping Beauty at all. The story was beautiful and the costumes amazing. I now know why you are so obsessed Arley.

No.....thank you. Savage elegance is the perfect description of the character. That was a fascinating tour of her costuming and I truly enjoyed it.

Thank you so much for sharing this compilation. This is precisely what I was looking for to help create my Halloween costume. You created a very detailed and organized post here.

Maleficent has a total of 9 costume changes in the movie. There was a ... costumekidslarge.blogspot.com

I just saw Maleficent 2 & like you, I am currently obsessed with both movies!
A n d I bought both Maleficent movie tie in books and Heart of the Moors!!