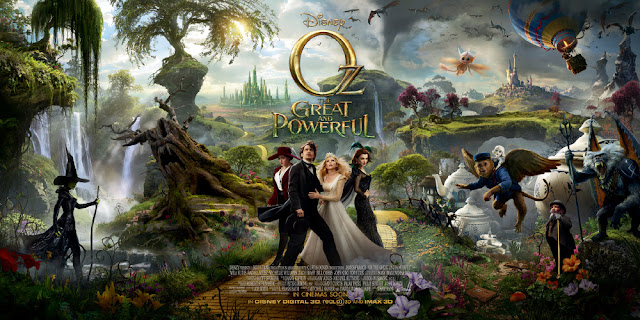 And, it features the GREATEST CHARACTER EVER CONCEIVED---
THE WICKED WITCH OF THE WEST!!!
﻿
"OZ" is a prequel to the "Wizard of Oz" movie. It's not based on any of the original OZ books, but does pull some characters from them that were not in the movie. It explains the origins of the characters - how the man named Oz came to be the Wizard of Oz (luckily, he already had the name -- Oz is short for Oscar). And, how the Wicked Witch becomes the EVILEST witch there is.
---Although, this movie describes the origins of the "Green Witch", I do prefer the version told in "Wicked" (the Broadway musical) better.----
Here is the elegant Rachel Weisz looking stunning as the evil witch "Evanora": 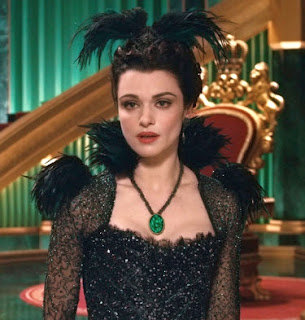 (Notice the sparkling emerald pendant around her neck? It's the source of all her power & beauty!)
Here's the enchanting Mila Kunis as her innocent yet seductive sister, "Theodora": 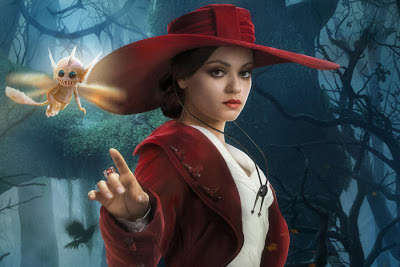 And, the beautiful Michelle Williams as "Glenda, the Good": 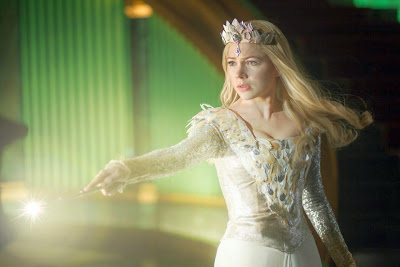 (The movie leaves out the last witch, the 4th point on the compass)
Then, comes the Wicked Witch! She is transformed into her evil green-ness because of jealousy, hate, and revenge --- all because the Wizard played with her emotions, then hooked up with someone else! (A rather silly plot point, which/witch doesn't reflect well as to the mental health & stability of the women in Oz.....) But, it does explain why, in the original movie, the wizard wants Dorothy to destroy the Witch.
Here, she starts the transformation: 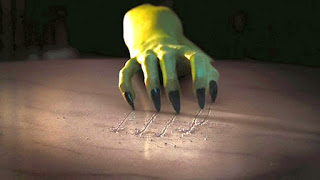 And, the final reveal: 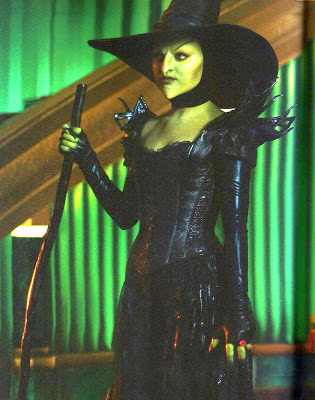 I must say, the Wicked Witch does show a lot of cleavage in the movie, made even more prominent by the tight black leather corset she wears. This is abundantly clear in one shot where the Witch leans down toward the camera in a threatening manner. Being in 3-D, those boobs looked like they were coming right at you! (I ducked!)
.....Funny, I don't recall the Witch's breasts ever mentioned in any of the original OZ books.........
And, of course, as any good Witch movie must do, there is a final show-down between the good & bad witch. As the evil witch takes to the air and hovers over good witch Glenda, threatening her with a fire ball, --she spits out the bitchy/witchy line:
"What's the matter Glenda? All out of bubbles?"
But, not to worry, as Glenda makes short work of her, and banishes her from Oz.... forever!
﻿
﻿
﻿
﻿
﻿
﻿
﻿
Posted by Arley at 10:10 AM No comments:

FINISHED DAY OF THE DEAD SHRINE

Hi All,
I finished the second "Day of the Dead" shrine for my friend Pamela (of "Treasures of the Gypsy" company). It's about 5 feet tall (notice the door knob in the photo). This is definitely the largest doll I have ever made. This will be a display piece in Pamela's booth when she goes to fabric/quilt conventions as a vendor. It will display and hold all of her "Day of the Dead" merchandise. Only the top shelf is in it right now -- there are more shelves that go inside.

The torso, head, and arms are all made of fabric that's been stuffed. I needle-sculpted the soft head to look like a skull, then painted it.﻿
Since this piece is meant to travel, and to be set-up & torn down at every convention, I designed it to break down in pieces.
First, the skirt and hat come off:

Then, the torso is remove from the top of the "boat" shelf -- (she's held on to the top with Velcro). And, everything packs inside the shelf, to be put in the truck and carted off to the next show: 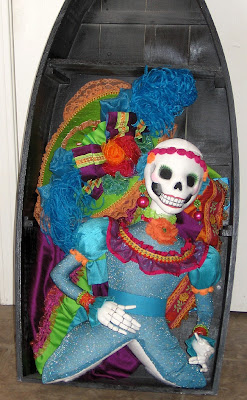 The "boat shelf" is about 3-1/2 feet tall. I bought it at Hobby Lobby. It was covered with all sorts of "nautical" stuff, but that got ripped off and the whole thing painted black.
﻿
﻿
﻿