Hi All,
Okay, today I'll show you another doll from "Malice in Wonderland" for Roger's Garden Halloween show. It's my "Queen of Hearts": 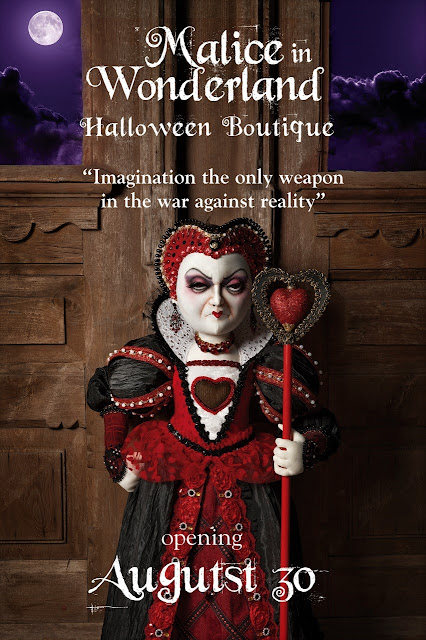 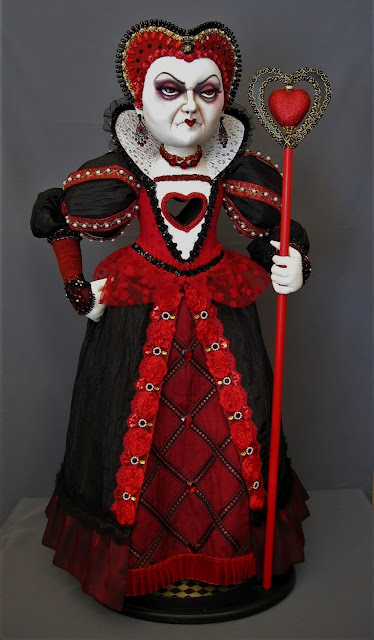 She is about 3 feet tall, and all cloth.

The people at Roger's Gardens wanted an original design,-- with no reference to Tim Burton's "Alice" movie (played wonderfully by Helena Bonham Carter.) Here's the original design I submitted: 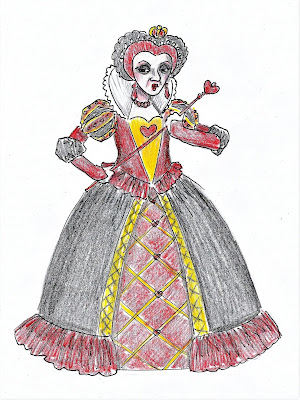 It was decided to not use so much gold, and focus on the colors red, black, and white.

They did ask for one thing that proved challenging to me in the building of the piece: Instead of a red heat on her chest, they wanted a heart-shaped hole in her chest (as if her heart was removed -- she was truly heartless!)

To put a hole in the chest of a stuffed doll is like putting a hole in a pillow. The edges had to be sharp and clean. My solution was to insert a heart-shaped tube, made of buckram and strengthened with wire sewn all around. Thankfully, I thought to line the tube with black felt before putting it into the chest. 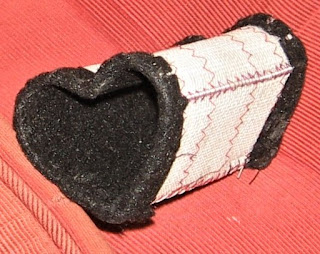 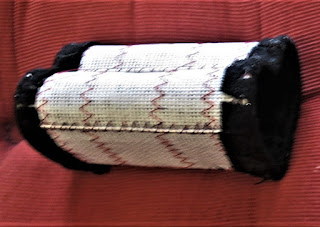 So, after I stitched the torso, I put the heart-shaped tube inside the chest (I had to leave the side seams open to do this), and stitched the ends to the front and back of the torso, while carefully cutting away the fabric from the torso after every few stitches.

After the "hole" was in place, the next challenge was to put a wire armature "spine" in the torso, (without going through the hole). I made the spine by bending a wire in half, so I would have two wires making the spine. By careful measuring, I formed a circle in the middle of the spine by bending each side into a half circle so it could go around the hole in the chest. (A lot of the bending of the wire had to be done while the "spine" was inside the torso, because once it circled around the "hole", it couldn't come out of the torso.)

After the heart-shaped hole and the wire "spine" were in place inside the torso, I stuffed the torso and stitched up both sides to finish it. 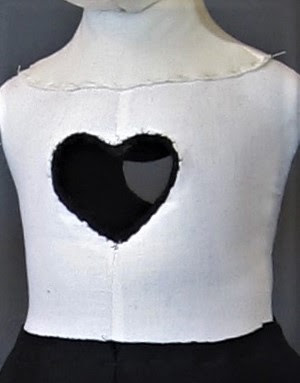 The legs were made just like the Mad Hatter (from 2 posts ago). Heavy wire armatures were put in both legs that went into the wooden base. Because the Queen would wear a long dress, her shoes wouldn't be seen. So, to make it easy on myself, I gave her flat shoes so I could glue the whole foot onto the wood base.

(She is wearing black underwear in the photo, so you can't see where the legs are sewn to the torso.-- I have learned that anytime you make a doll in a skirt, you must add underwear, because people always look!) 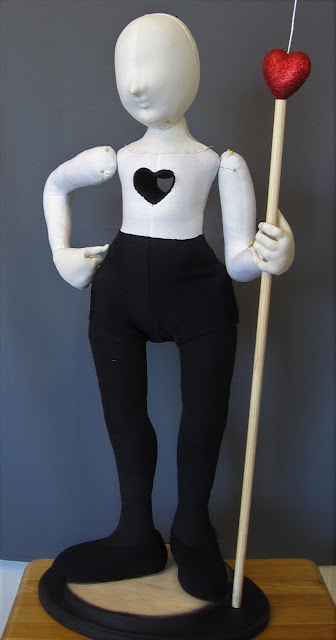 Here are the arms, all dressed with her heavily embellished sleeves, before sewing them on. 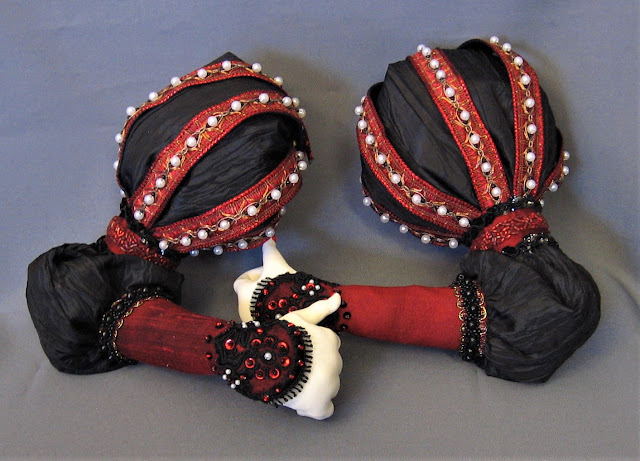 Instead of an elaborate hairstyle, I went for an elaborate heart-shaped headdress. I gave her black hair pulled up in a small bun.  (--Sorry, I don't know what happened with the color when I photographed this.....) 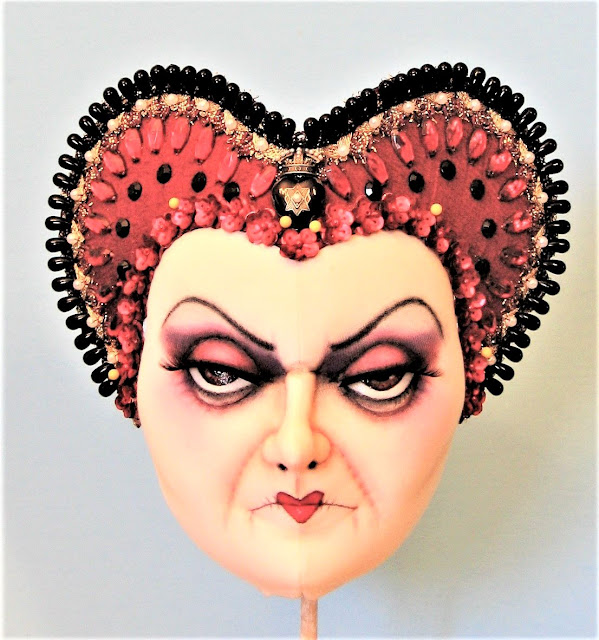 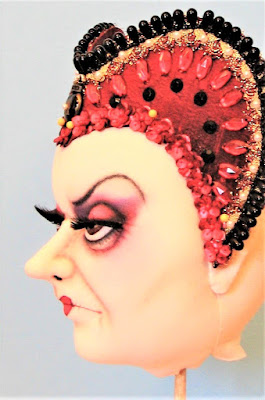 I build the costume on the doll in layers. 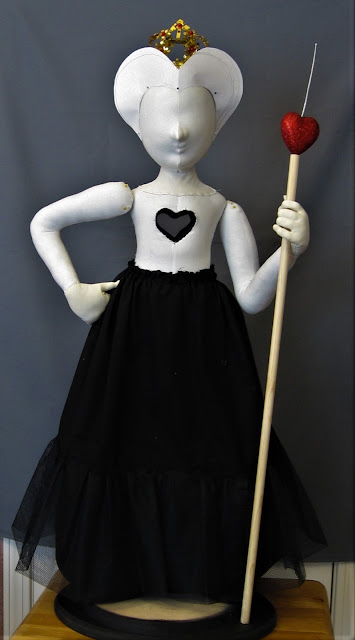 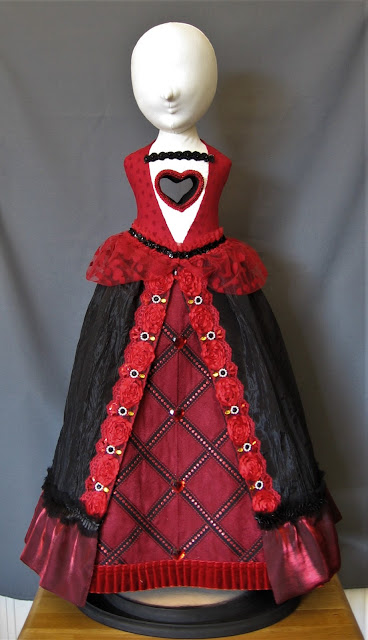 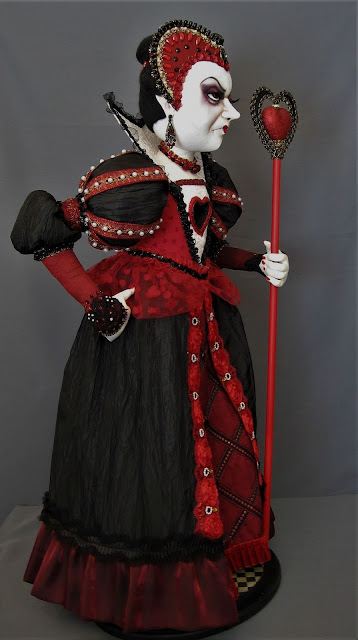 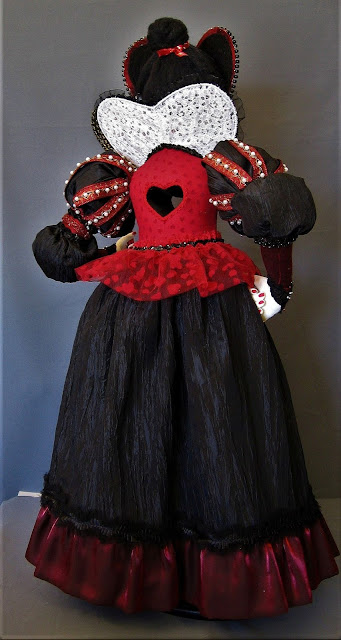 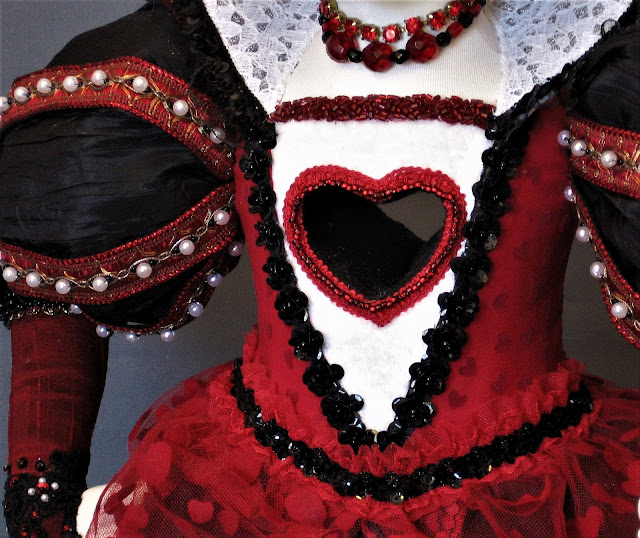 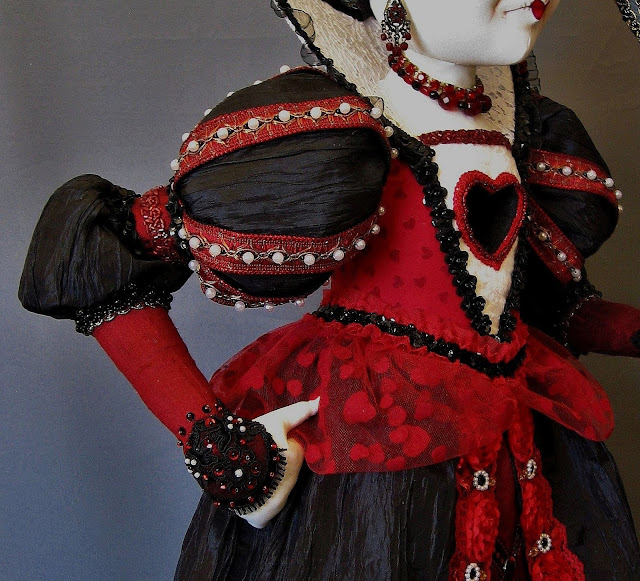 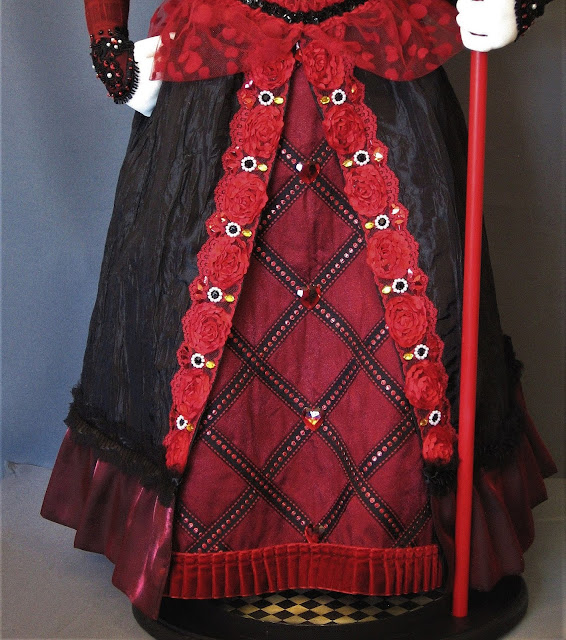 Hi All,
Just a brief post letting you know I've finally converted my "LA MODE ORIENTALE" costume pattern into a digital PDF pattern. So now, it's available for purchase as a PDF that is emailed directly to you for you to print yourself. 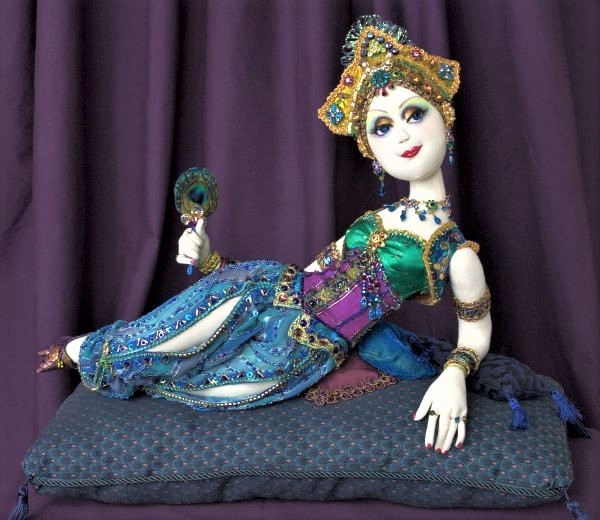 Years ago, my computer crashed and I lost everything on it, including some of my earlier patterns. Some of them I've been able to scan the paper copy and get it back into the computer. But, some of them looked terrible when I tried to scan them (including this one). 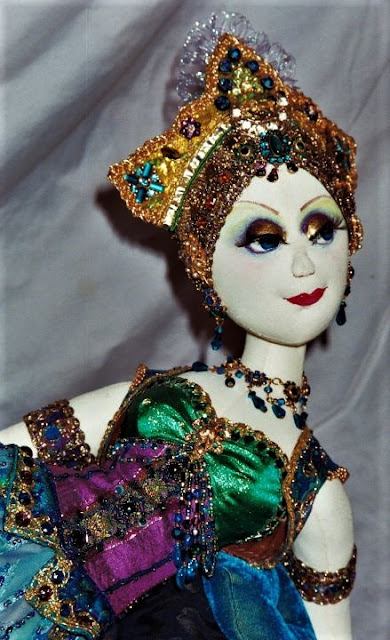 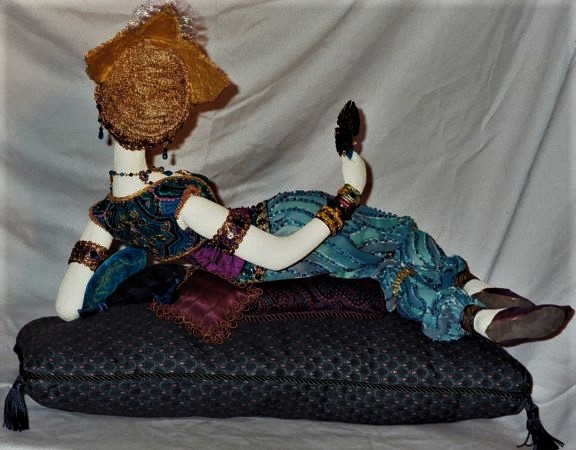 So, I've been slowly re-typing all the instructions, re-coloring and scanning all the illustrations, and putting it all back together again. I also had to re-do the patterns themselves and put them on 8.5 x 11 computer paper (instead of the old 11 x 17 paper) so it would be down-load-able. 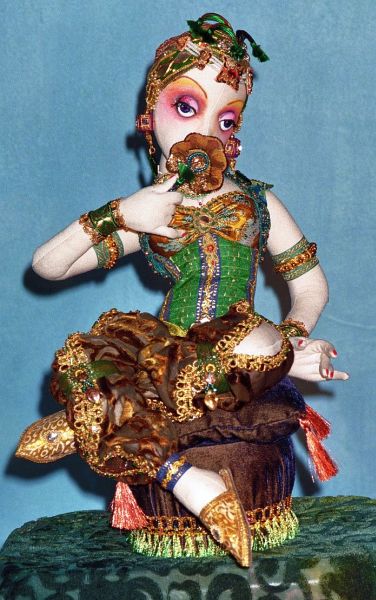 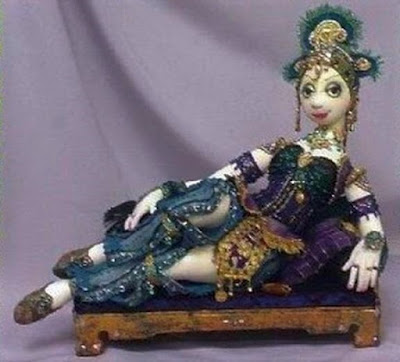 The new costume pattern is on my Etsy site (www.etsy.com/shop/ArleyDollDesigns) for $10.
This pattern is a COSTUME ONLY for my "La Femme" doll. (doll pattern is NOT included with this pattern). 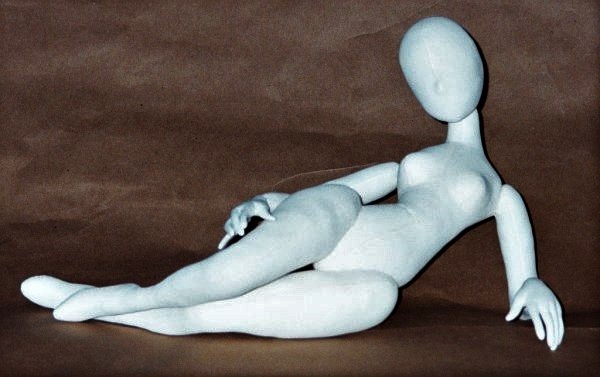