Hi All,
It's October, so time to start on my Halloween yard! Every year I try to make one or two items to add to my front yard for Halloween. This year, I've made 2 Mandrake Root babies! 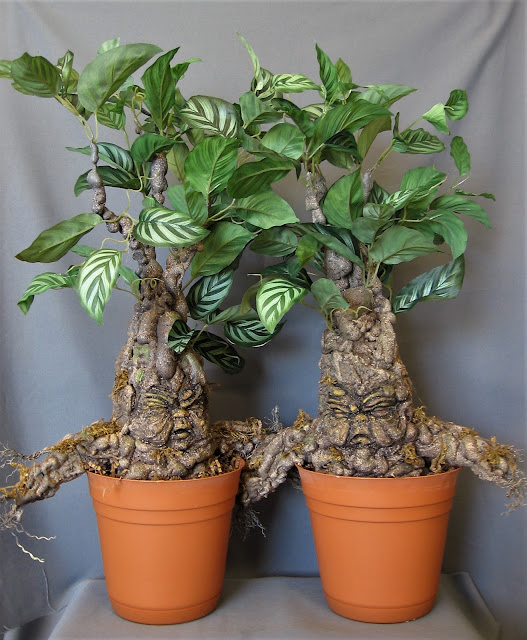 This project was fairly simple, and only took me less than a week of man hours (spread out over 2 weeks). I looked at a lot of images from the Harry Potter movie, and ones that people had made themselves. (There are some good tutorials on the Internet. Try googling "Mandrake diy")

Here are close-ups of the two faces: 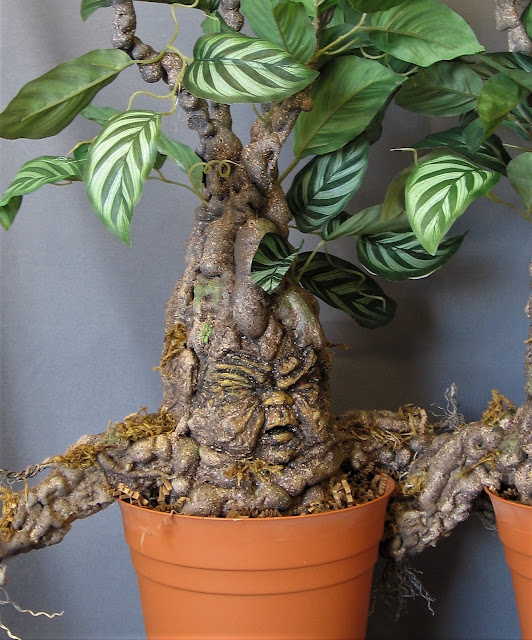 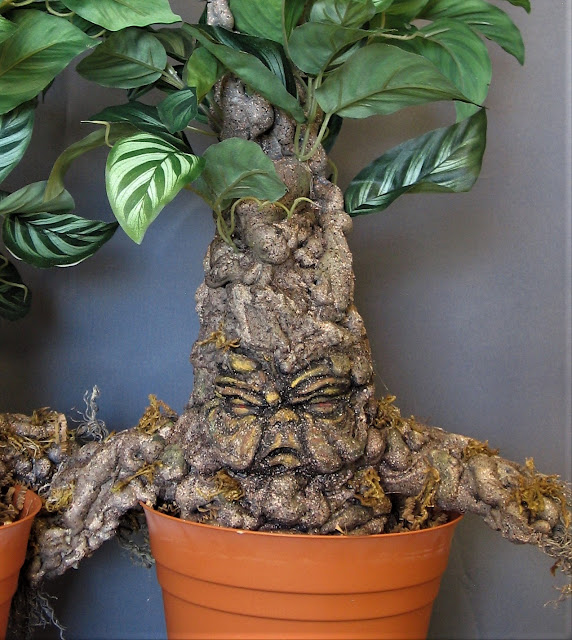 (This one turned out more "grumpy" than "crying".)

To start with, I got 2 life-size baby dolls (I tried to find some at the thrift store, but they were all too small. I found these, sold together, at Walmart for about $16.) They are about 13 inches tall. --Aren't they cute?? 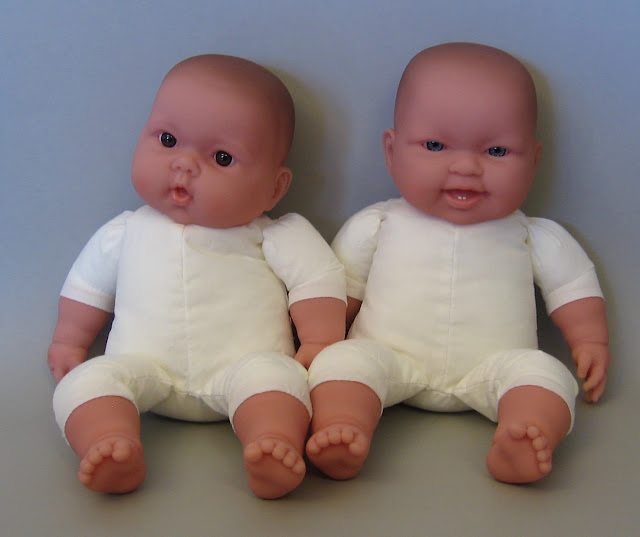 I re-sculpted the face to look like they were crying/screaming. I used 2-part Apoxie clay, as I had that on hand, and it was the only thing I could find that stuck to the rubber heads. I studied my research, and when babies cry, they scrunch up their eyes & open their mouth in a horrible frown. 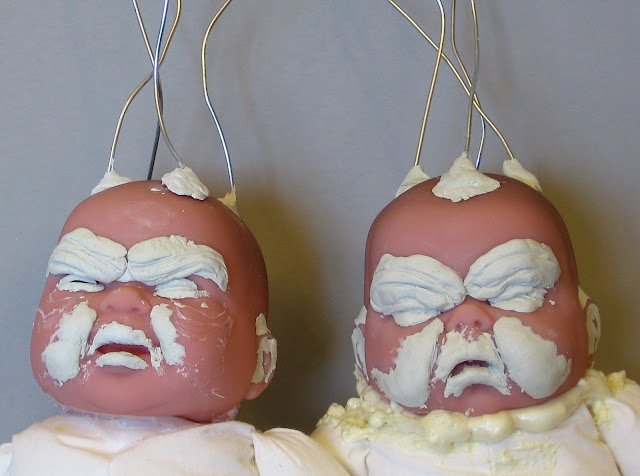 Later, I added some hot-glue lines to accent the wrinkles in the face.

Next, I added expanding insulation foam from a can ("Great Stuff" from Home Depot for $7). This is a tricky product to use, as the foam expands and grows after you spray it on. You never know how much it will expand and what it will look like. (I did carve away some of the foam that got too big in the end.)

I also added some unraveled twine to the arms. 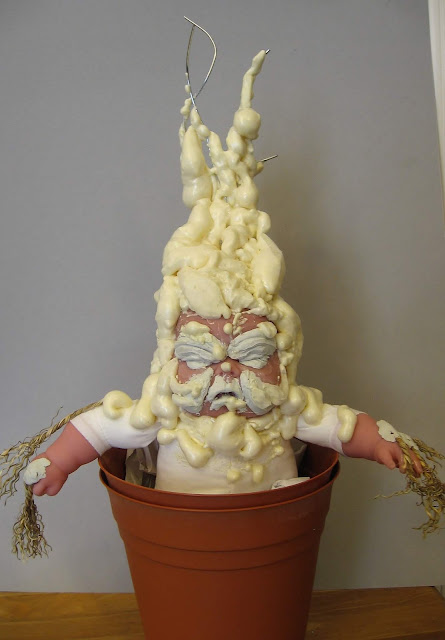 Here's a trick if you use this insulation product: After using, clean the spout and removable tube with acetone (nail polish remover) to dissolve any foam product. Otherwise, the next time you use the can, nothing will come out because the foam at the top has harden. (I threw away several cans of this  before I figured that out....)

Next, I sprayed on several layers of primer and a coat of "sand" spray. Aerosol spray paint does not affect the harden insulation foam (not at all like using spray paint on plain Styrofoam -- the paint will melt the foam away!) 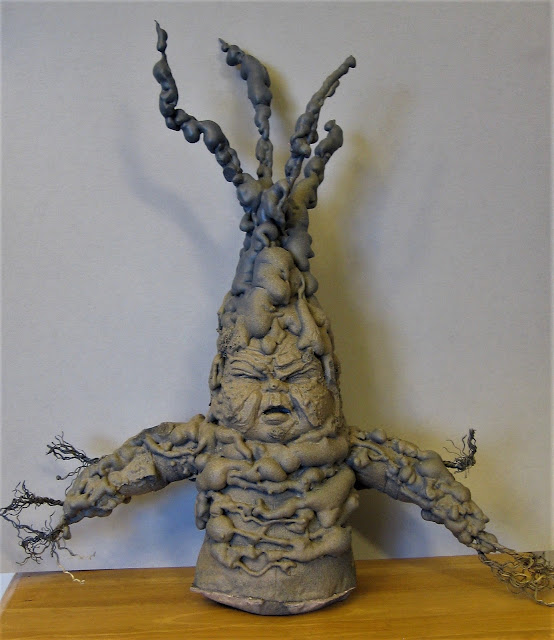 (I cut off the legs at this point, as these are going to be displayed in a pot and never removed.)

There were many textures in the piece at this point (mostly smooth). I wanted to go over the whole thing with more texture to tie it all together. I used "stone" spray paint (it comes in several colors - I used a tan color), which has both a mix of color and texture to it. 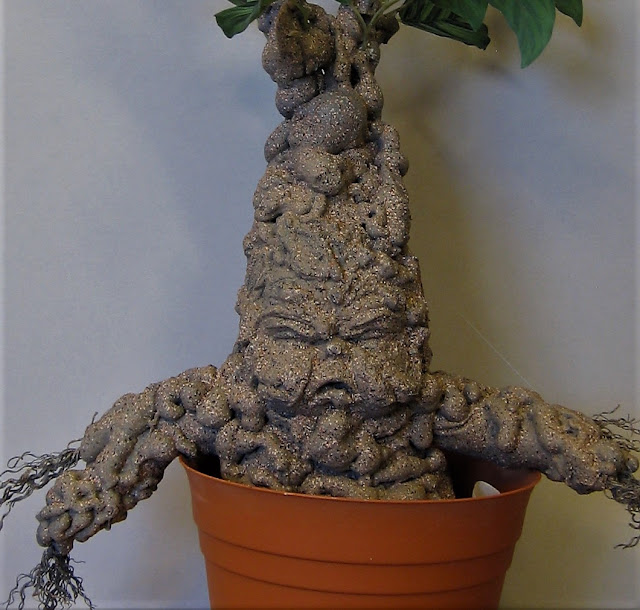 Here I'm starting to glue on leaf branches (got several stalks of leaves at Michael's). 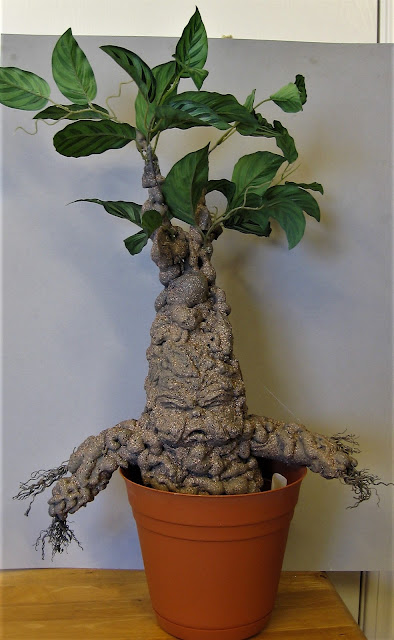 After texturing, I went over it all with a wash of brown acrylic (thinned), then added some black for shadow and yellow ocher highlights, with a bit of olive green here and there. I even added just a drop of red in the eyes to make them look creepy.

Lastly, I hot-glued some brown moss for more color and texture. 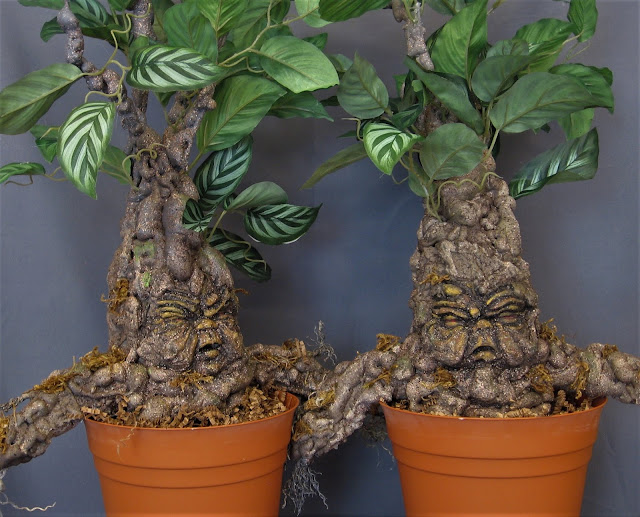 I'll probably go in and add some paint to the pots to distress & age them a bit.

I also did some research on actual Mandrake roots (they are a real thing). There's a lot of information about them. The roots really do look like limbs of a person (if you sort of squint at them....) 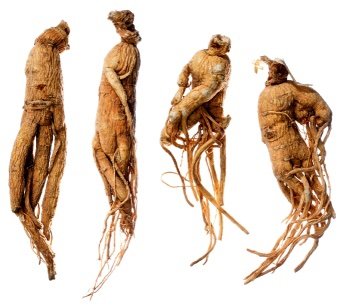 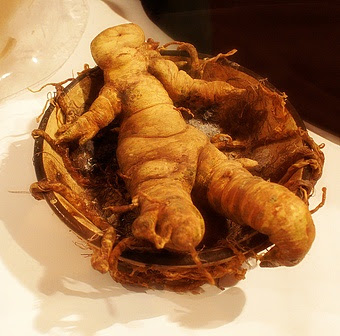 In ancient times, people believed these roots had magical powers. They were believed to be used by witches in their rituals. (So, J.K. Rowling wasn't straying too far from the myth when she wrote this part.) 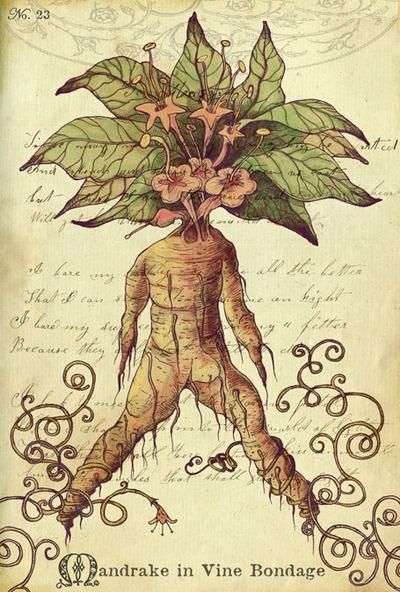 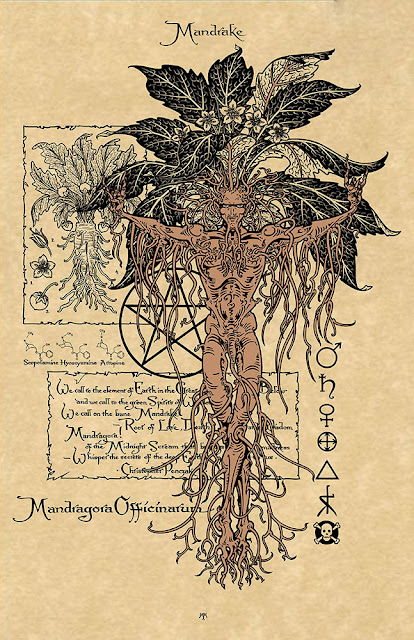 It's officially Halloween season!  -- Have fun.

Hello All,
I've finished another witch for Halloween, but this time I made a "hag" witch. Most of my dolls tend to be glamorous or funny, (or characters that THINK they are glamorous). But, this witch has NO delusions about what she looks like. 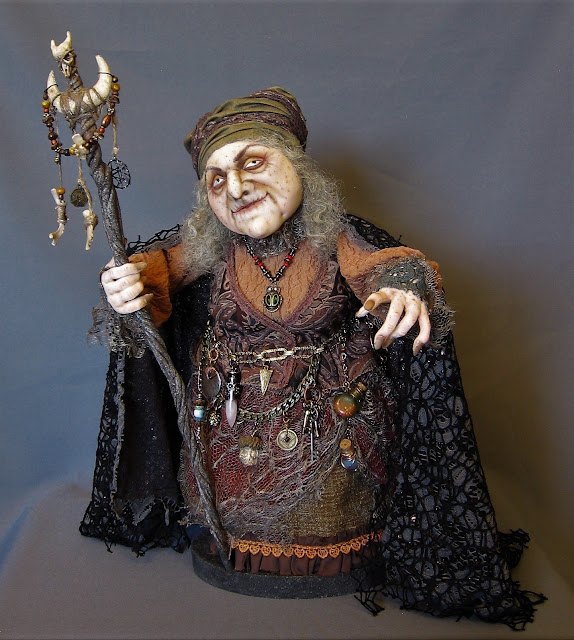 She's about 17 inches tall, and is bent over with a hump on her back. (This pose proved tricky to photograph, as she is bent down, but looking up). 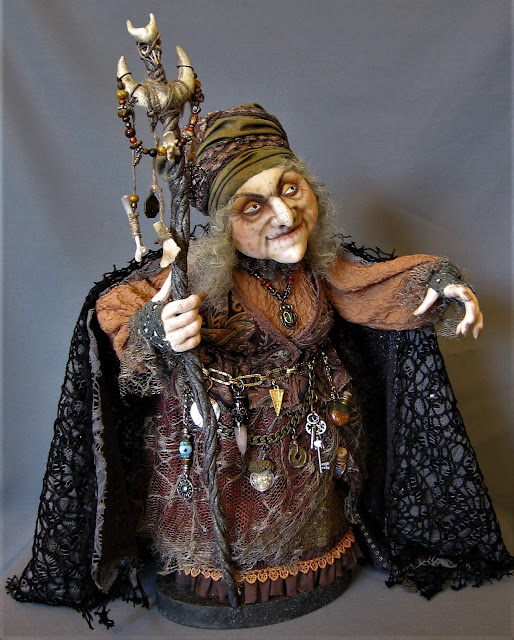 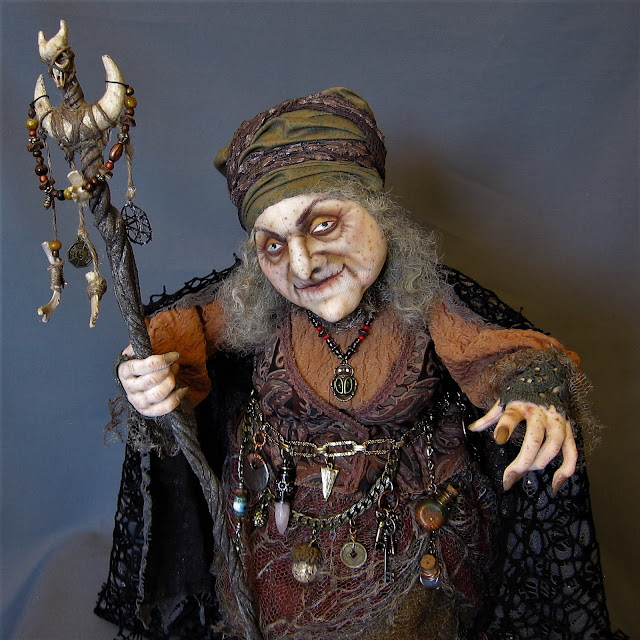 I've been experimenting with aging cloth faces. I've been trying to add wrinkles, bags, and sagging skin. Also, I've tried to add some texture to the cloth face. These things are easy to do with a sculpted clay face, but very hard to do in cloth. 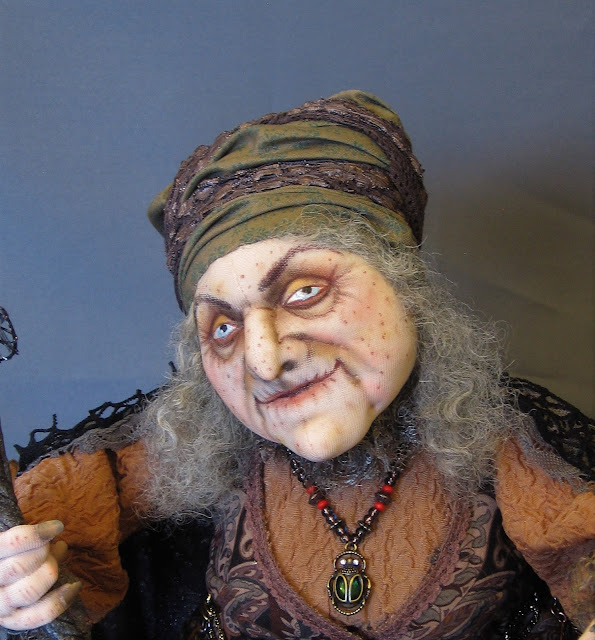 I picture her living alone in the forest. I don't think she's necessarily EVIL, but she's no lollipop either.

I had fun adding all sorts of do-dads to her belt -- tools she needs to make potions and casts spells. She is magical, and to show that, I added a bit of sparkly black fabric under her cape (made of gray lace and black netting). 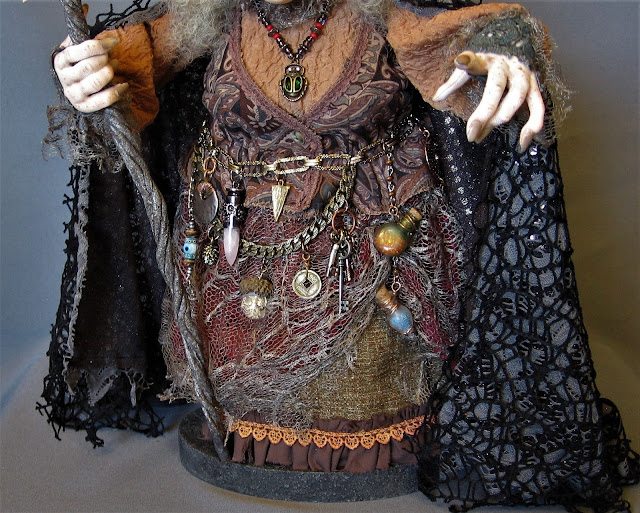 I also tried to do fingernails (which I've only ever done once before). I felt she needed thick, dirty fingernails to accent her bone-y hands. I made the fingernails from plastic drinking straws, cut to shape and pained with acrylic paint. 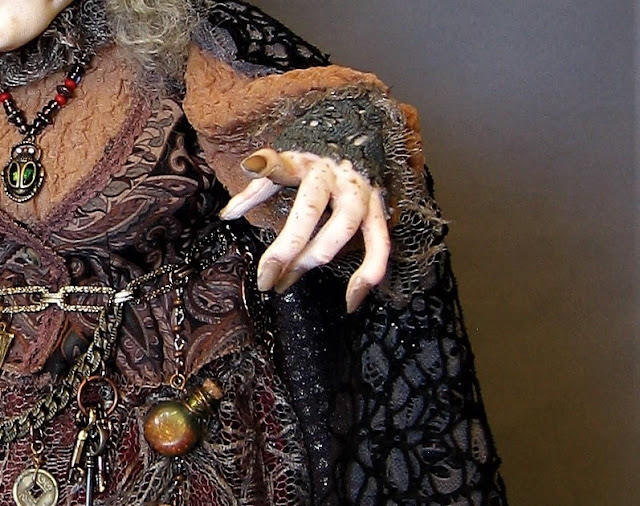 I think her name shall be "Agatha".