Okay, here's some more "work in progress" photos on how I made the Evil Queen candlestick doll.

First thing I do, after sewing and stuffing the torso, head, arms, and hands, is to pin the whole thing together to figure out the pose. 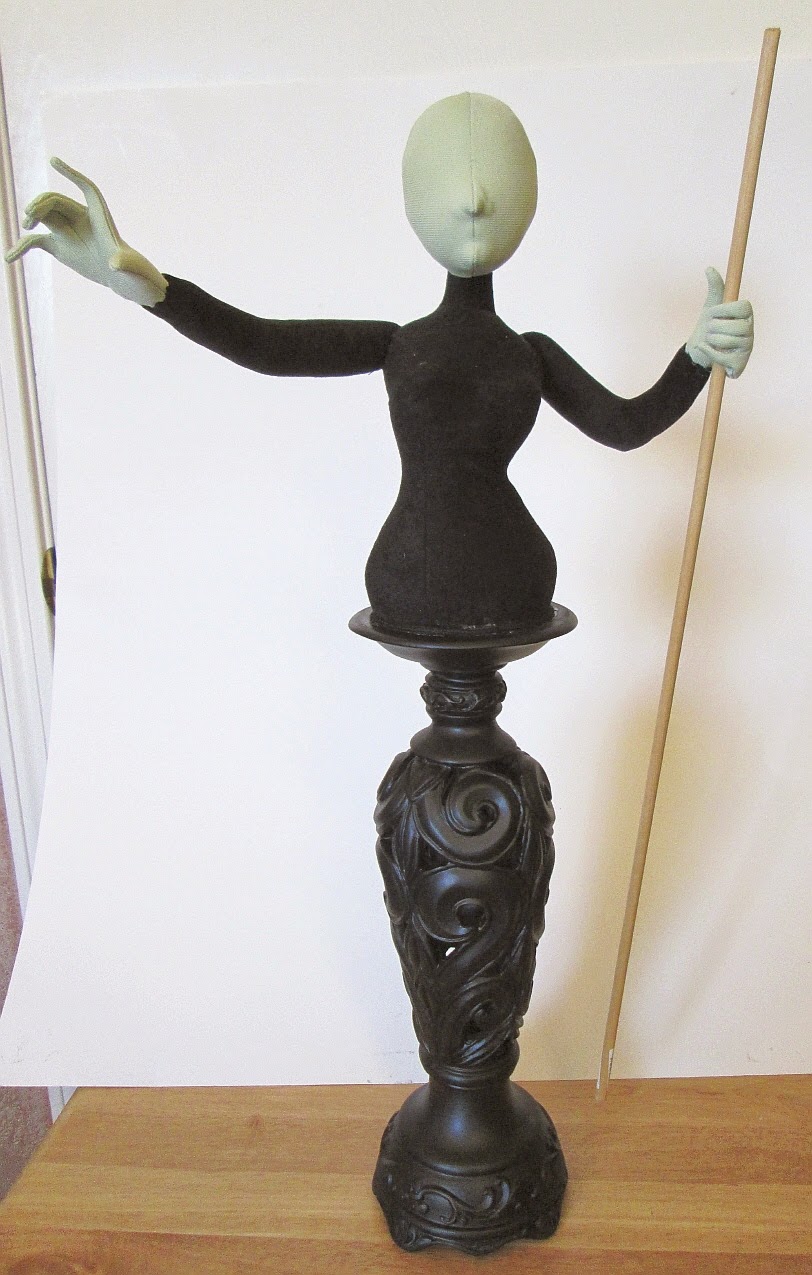 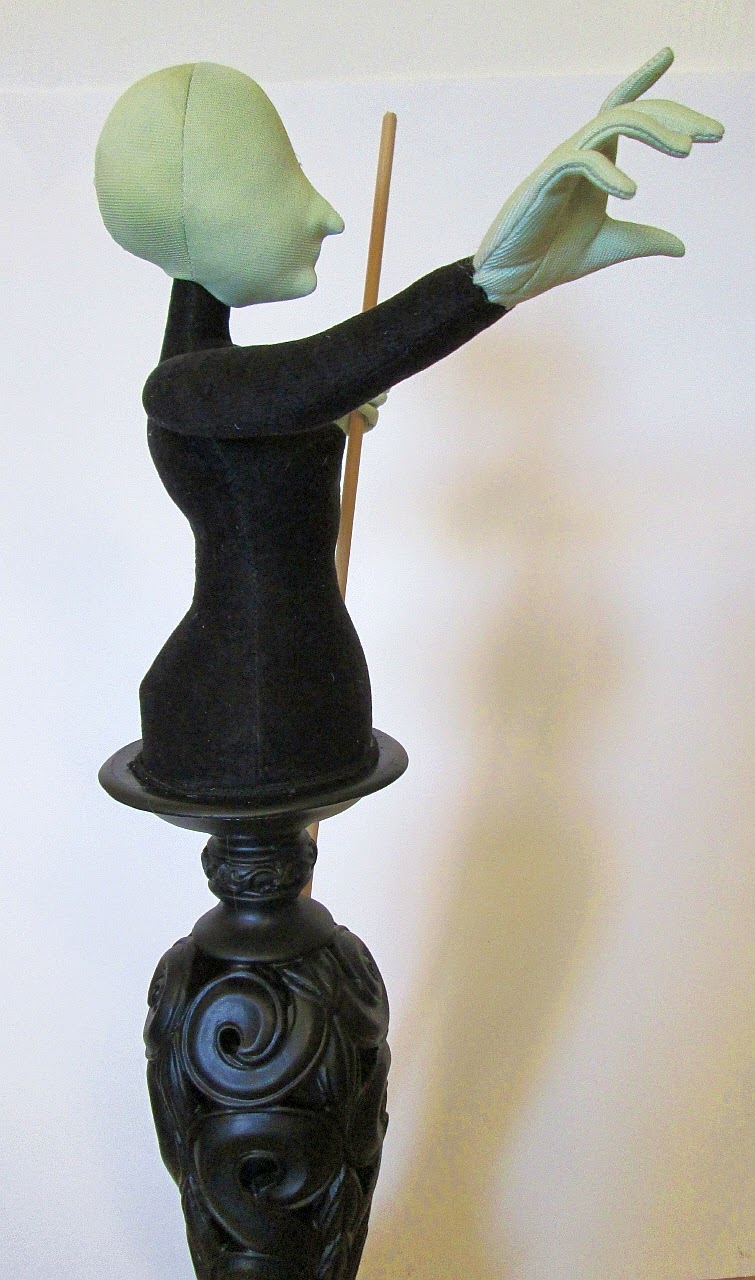 I try to finish the arms as much as possible BEFORE I sew them to the torso. Here, I've painted the fingernails on (with SCRIBBLES dimensional paint) and glued on some braid to the wrist (to hide the hand-sewn seam where the hand and arm connect). 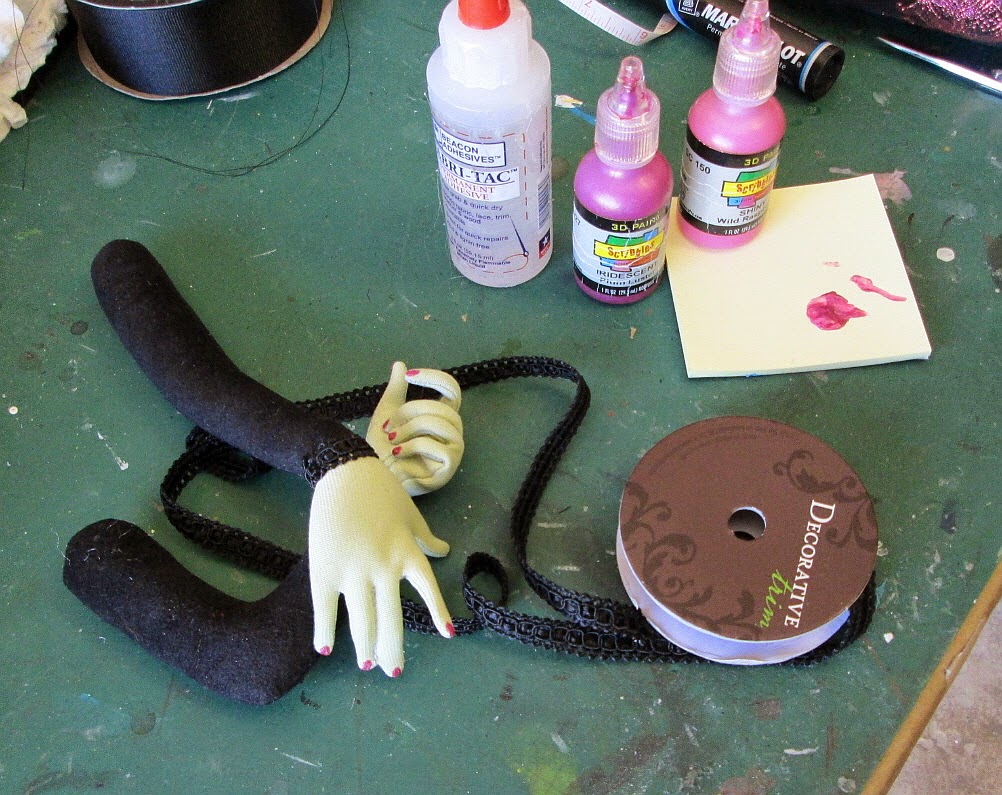 By the way-- I ALWAYS match the fingernail color to the lipstick color.


It's at this stage that I decided to make a "slip cover" for the torso, using a stretch velvet embroidered with sequins.﻿

Now, here's a problem I've encountered before with resin candlesticks -- they tend to break at "weak spots" when traveling or mailing them. So now, if I see a narrow point in the candlestick, (like the 2 spots right under the torso), I try to re-enforce it by hot-gluing braid onto the candlestick.

Here I am, in the middle of gluing braid in the weak areas with hot-glue. Now, to finish the costume. I sew some "angel" sleeves in black taffeta scattered with sequins, with a dark magenta with silver metallic thread for the linings. 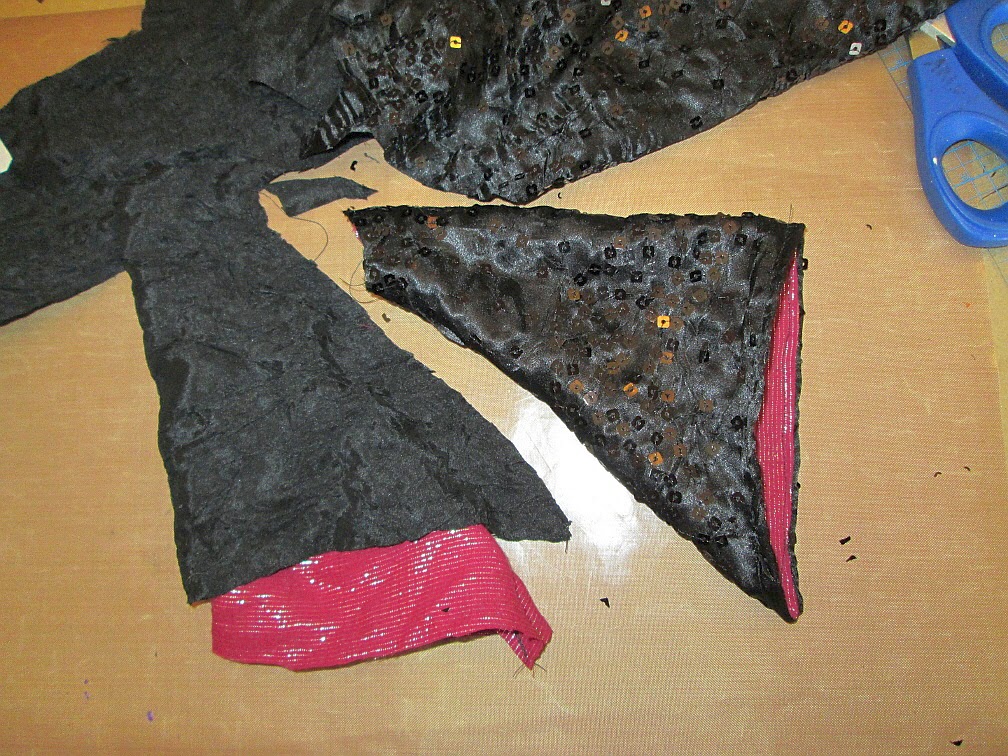 I slide the sleeves on the arms and stitch them down at the shoulder. And, I make a hood out of a black stretch fabric. I pin the hood to the head, and stitch it in place. 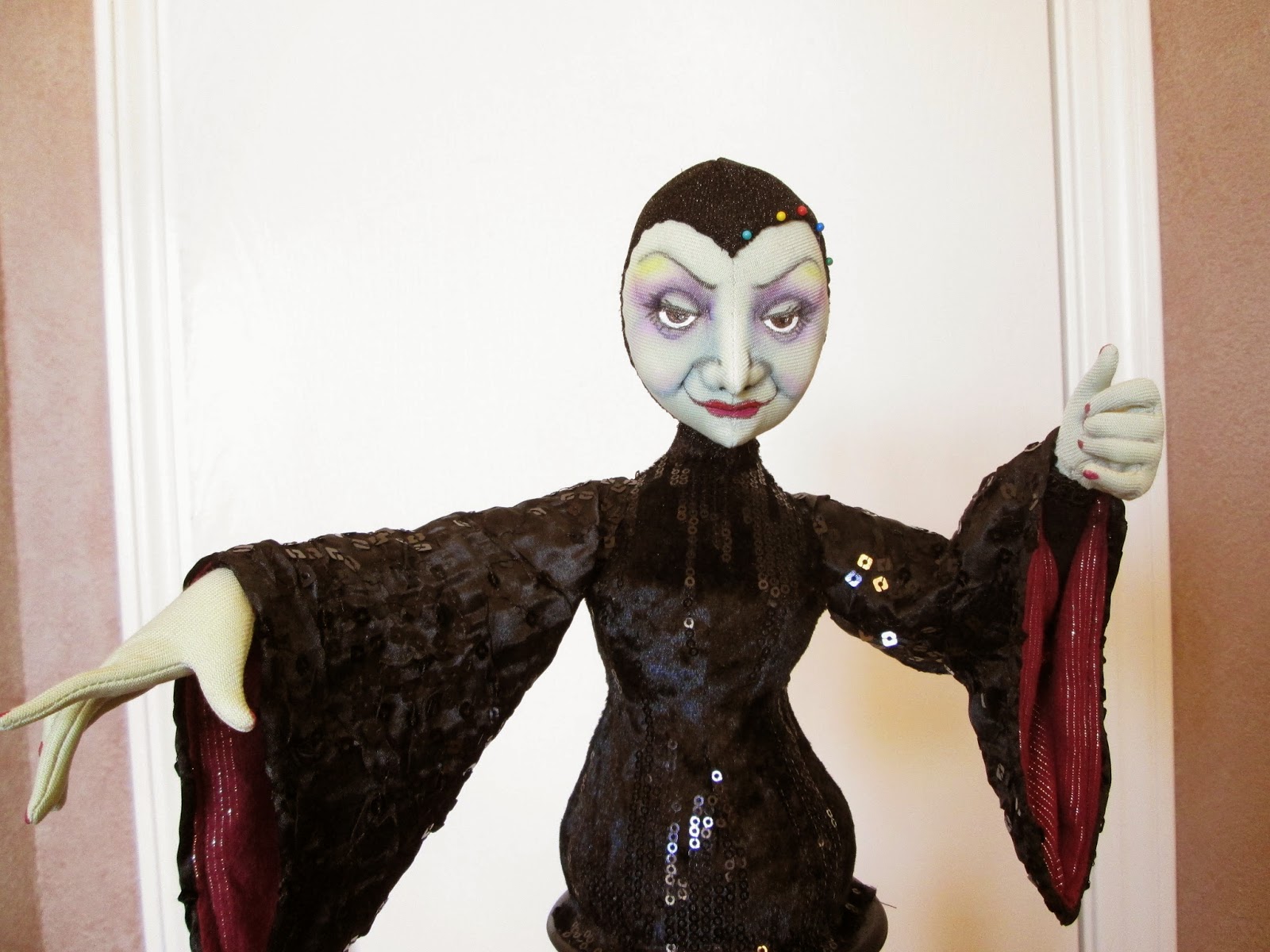 Now for the horns. I stitch the horns out of black spandex. I stuff the horns, and sew the opening at the bottom closed. I could leave them as that, but I decided to add a bit of dimension to the horns by wrapping some red-plastic covered wire around the horns -- very simple. 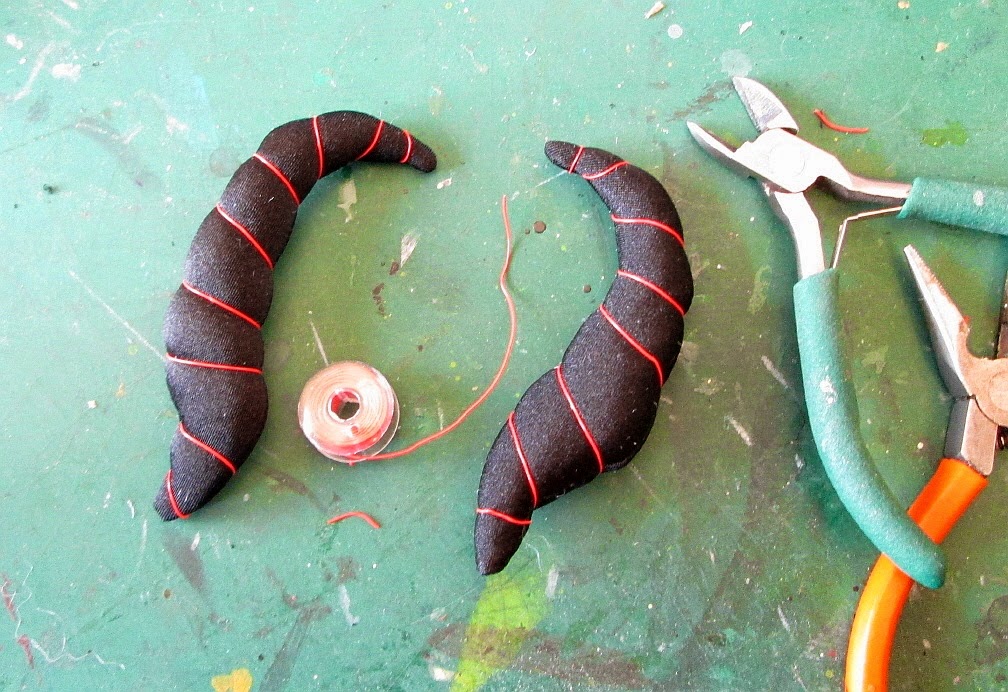 After the horns are stitched to the head, I start thinking about the bottom edge of the torso - where the candlestick starts. Usually, I glue beaded fringe from this point - sort of a "skirt"- to bridge the transition from the bottom of the torso to the candlestick. But, while sorting through my large boxes of "BLACK" fabrics, I found an old piece of netting with sequin fringe stitched to it. So, I cut a rectangle of it, gather it slightly, and glue it to the bottom. Over that, I glue a black beaded trim with a braid around the top edge. 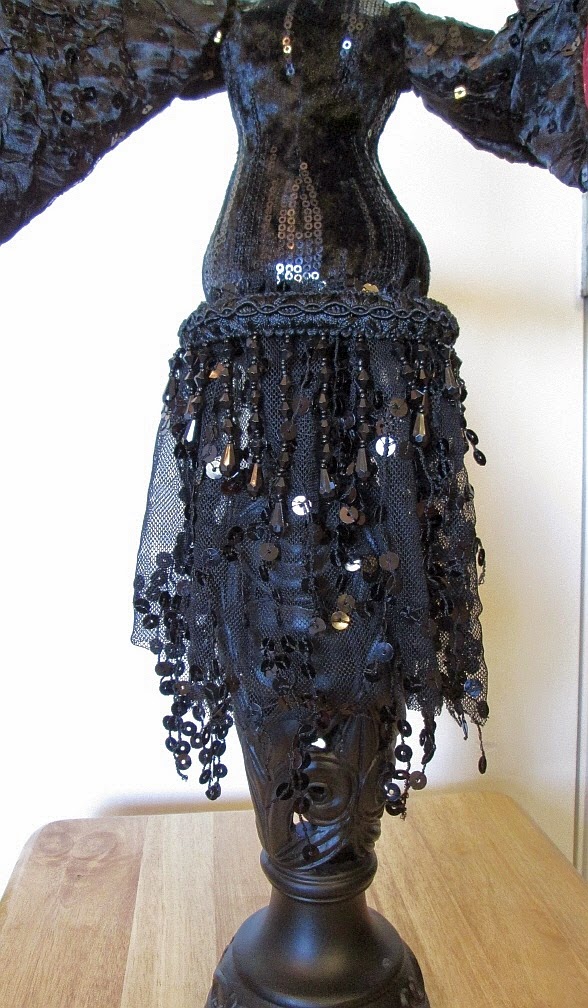 (At this point, my entire work table is COVERED in black sequins!!)

Now for the cape and collar. The cape is black satin, lined with a dark metallic magenta/black print. The collar is cut out of two pieces of the same black satin. 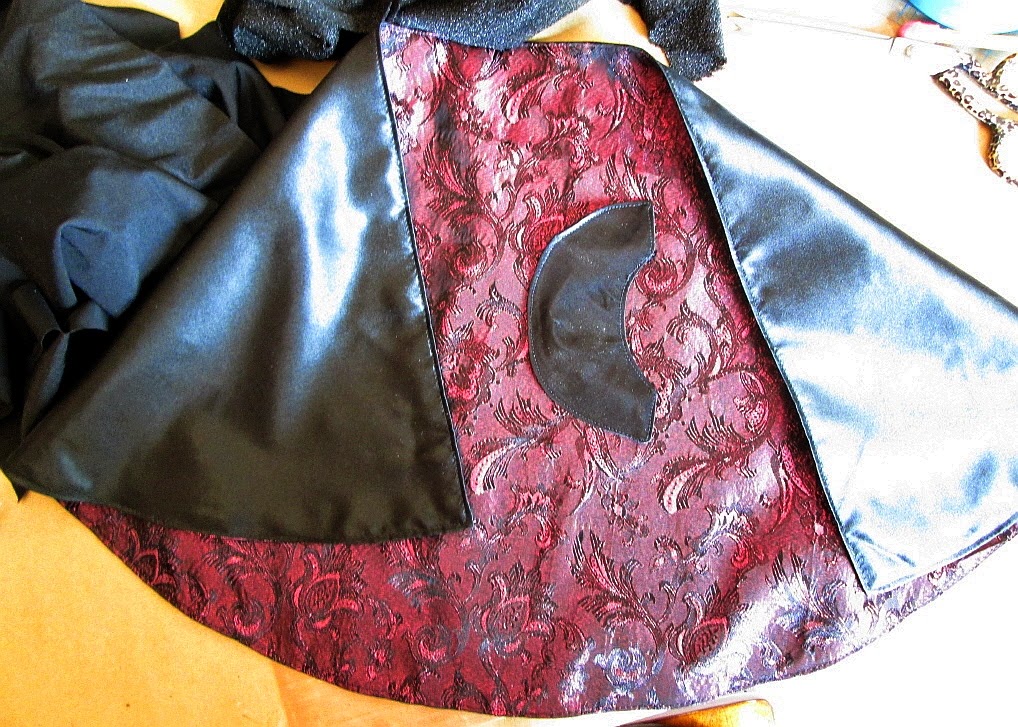 And, just for fun, I gave her a magical staff. It's just a wooded dowel with a marble on top, held in place with two-part AVES APOXIE. After it dries for 12 hours, it's sanded and I paint the staff a dark gold.

Now, all the pieces are in place. 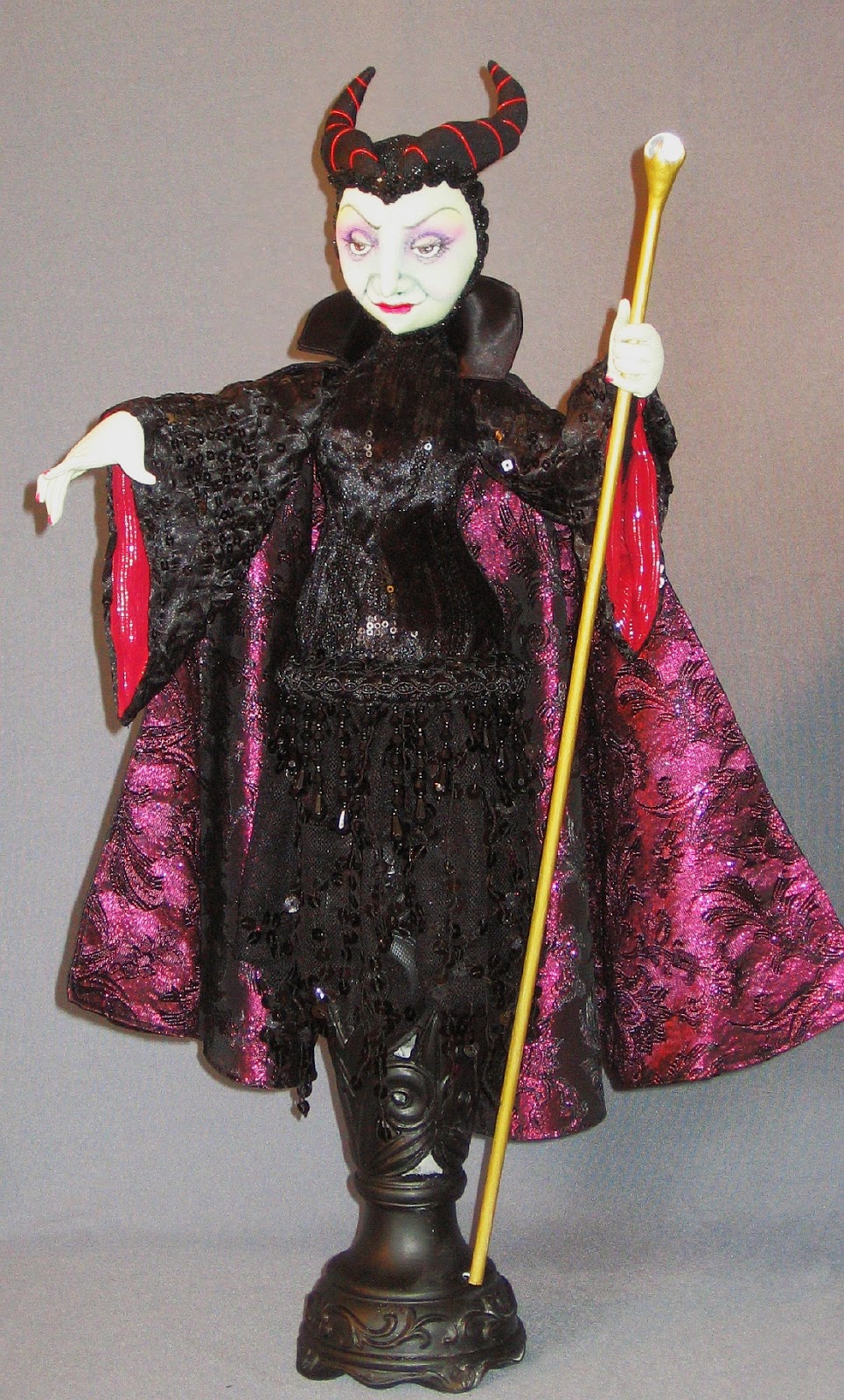 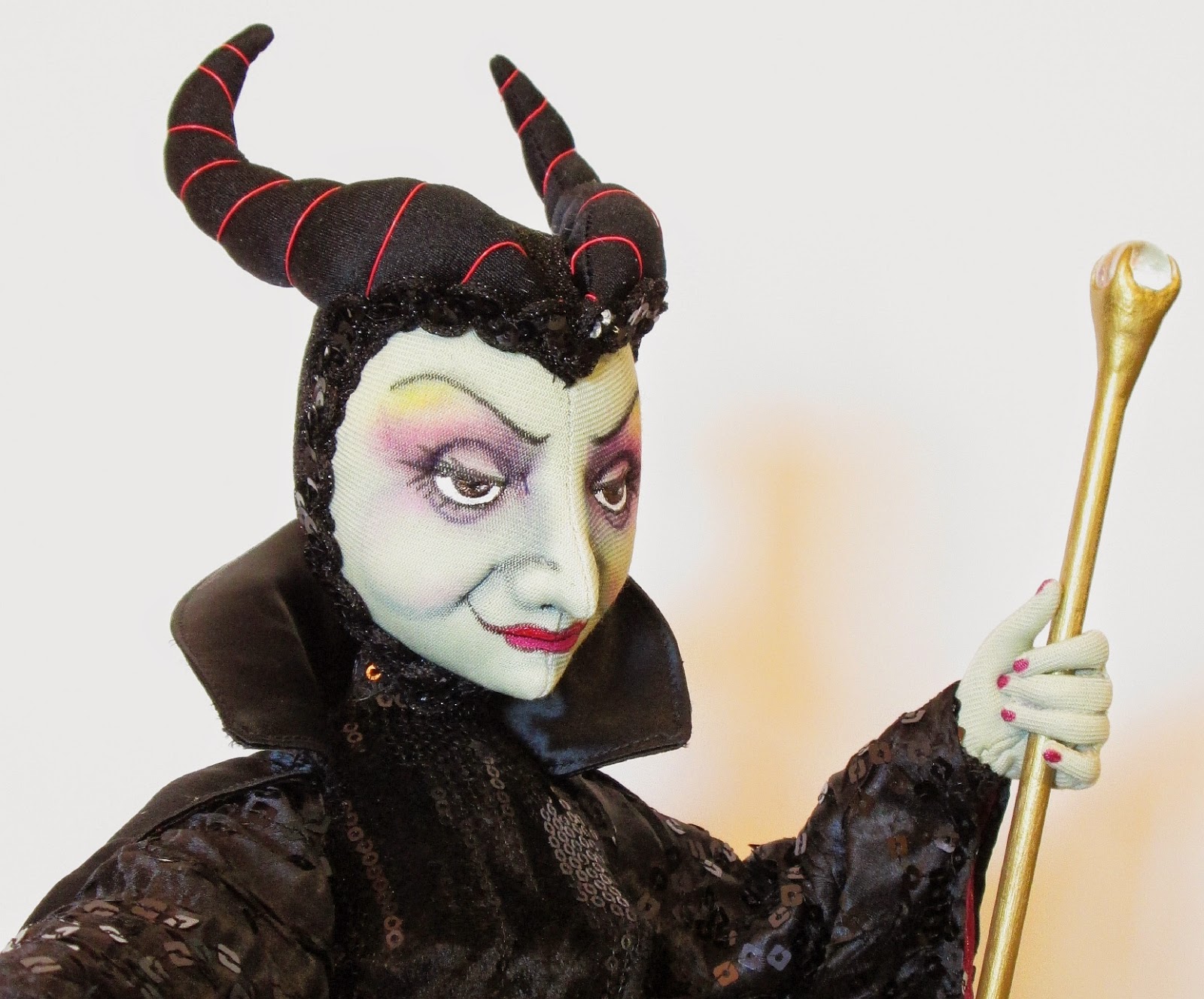 Arley, you are just so amazing. I love to watch you put your art dolls together. Romona

Incredible to watch her come together, I am in awe of how you make her hands so perfectly!

Thanks Romona and Deb!
It's real easy to make the hands -- IF you use doe suede! I find it nearly impossible to create good looking hands out of cotton. The knit fabic is so easy - you can cut the seam allowance down to nothing, and because it stretches, turning fingers is a snap. The fingers stretch slightly when I put the chennile stems in, so they look longer and thinner than they started.

Thanks Mary Ann & Maria! Glad to hear you like it!
-Arley

I'd love to be a fly, on the wall of your studio. I'd need a little fly-sized notebook and camera and I'd learn so much, just watching you work.